The many forms of the devil in the Bible From the most comical of cartoons to the most grotesque of gargoyles, the majority of the population today can immediately recognize an image of the devil. But does our modern conception of Satan have any resemblance to the devil in the Bible? Just who is Satan? Is this horned, red-skinned monster with a pitchfork ruling hell truly the great enemy of God envisioned by the writers of the Biblical texts?

The short answer: no, not really.

In the Hebrew Bible, YHWH’s greatest enemies are not fallen angels commanding armies of demons, nor even the gods of other nations, but, rather, human beings. It isn’t the devil that spreads evil across the face of creation—it is mankind. Other than human beings, YHWH has no nemesis, nor are there malevolent spiritual forces not under his authority. YHWH is ultimately a god of justice. He is behind the good and the bad, behind the blessings and the curses. It is within this divine court of justice and retribution that Satan has his origins.

The Hebrew word śāṭān, meaning “accuser” or “adversary,” occurs several times throughout the Hebrew Bible and refers to enemies both human and celestial alike. When referring to the celestial adversary, the word is typically accompanied by the definite article. He is ha-satan—the Accuser—and it is a job description rather than a proper name. From the Accuser’s appearances in the Books of Job and Zechariah, it seems that the job entails calling attention to the unworthiness of mankind. The Accuser is essentially the prosecuting attorney of the divine court of YHWH, and part of his job includes collecting evidence to prove his cases. With this bit of knowledge in mind, it isn’t difficult to envision the various “outcries against sin,” such as that against Sodom and Gomorrah (Genesis 18:20–21), as the voice of the Accuser.

It is difficult to determine at which point in Israel’s history the Accuser began to take on a much more sinister role in the Israelite/Jewish belief structure, or how heaven’s great prosecutor became the prince of darkness (Ephesians 6:12). It is certainly easy to make the connection between Israel’s time in exile and the likely influence of the cosmic dualism of Persian religion.1 However, even within books written well after the return from foreign lands, the Accuser is still a self-righteous lawyer. Though if 1 Chronicles 21:1 is any indication,2 they began to believe the Accuser wasn’t above getting his hands dirty.

It is perfectly clear, however, that by the first century C.E., Judaism developed a belief in the divine forces of darkness doing battle against the forces of light. This can be seen within the New Testament and other extra-Biblical writings such as those found among the Dead Sea Scrolls. There are likely several factors that inspired these developments, including the influence of Persian, as well as Hellenistic, religions.

If there was an army of evil spiritual forces making war on the righteous, they had to have a commander. It is at this time that the impersonal and lofty Accuser began to acquire the various names and titles that have filled the writings of western civilization for 2,000 years. The Greek word diabolos (from which “devil” is derived), meaning “slanderer,” comes from a verb that means “to hurl” (i.e., accusations).

Diabolos was typically used as the Greek equivalent for the Hebrew śāṭān (in the Septuagint version of Job, for example), though it was not uncommon to simply transliterate the word into the Greek satanas (1 Kings 11:14). Other names used for the leader of the forces of evil at this time include Maśṭēmāh, which means “hatred” (1QM 13:4, 11; Jubilees 10:8), and Belial, a popular name among the writers of the Dead Sea Scrolls, which means “worthless” or “corrupt.” “Children of Belial” (Hebrew: bene-belial) was a typical phrase used to describe evil people in the Hebrew Bible (e.g., Deuteronomy 13:13; 1 Samuel 1:16; 2 Chronicles 13:7, etc.). If someone were searching for a name that personified evil in the Hebrew Bible, it would be Belial, not Satan. Interesting enough, the name only occurs once in the New Testament (2 Corinthians 6:15), as Paul’s stark contrast to Christ.

It is also in this period that we begin to see the development of the tradition of equating the talking serpent in the Garden of Eden with Satan (Life of Adam and Eve xi–xvii). 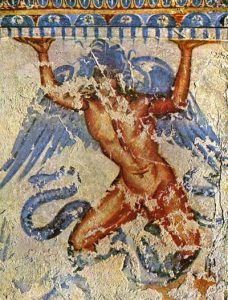 Etruscan fresco of Typhon from the Tomba del Tifone in Tarquinia, Italy, c. third century B.C.E. According to Greek mythology, the montrous Titan Typhon battled the mighty Zeus, who bound his foe in the dark depths of Tartarus to bring about a new era of peace.

Satan’s role in the New Testament, though highly expanded, has much more in common with the Accuser of the Hebrew Bible than the commander of the armies of darkness that is typically portrayed in the Dead Sea Scrolls. Even though he is given such lofty titles as “the ruler of this world” (John 12:31), “father of lies” (John 8:44), “god of this world” (2 Corinthians 4:4), “ruler of the power of the air” (Ephesians 2:2), and Beelzebul, “ruler of the demons” (Matthew 10:25; Mark 3:22; Luke 11:15), Satan is essentially treated as nothing more than a glorified prison warden who has been corrupted by his own power. Throughout the Gospels, Satan’s “kingdom” is never considered to be a burning underworld full of the tormented dead, but, rather, is equated with the bondage of sin and the curses brought upon humanity for acts of unrighteousness. According to Jesus (Matthew 12:29; Mark 3:27; Luke 11:21–22), a “strong man” (Satan) must be bound in order to plunder his house for treasures (humans), and it is clear he viewed his ministry and that of his disciples within this context. All other references to Satan in the New Testament, including those in Revelation, reflect this struggle for spiritual freedom.

Over the course of several centuries of influence from many different cultures, the defeated Accuser of the Christians would go on to appropriate aspects of various divine enemies (Typhon, Hades, Ahriman, Hela, to name but a few) to become the complex mythological monster that was thrown out of heaven at the beginning of time to rule the fiery underworld and torment the souls of the damned. Such a character makes for great movies and Halloween costumes, but would have been virtually unknown to anyone in Biblical times.

John Gregory Drummond is a writer, artist and blogger as well as a researcher. His academic interests include the Bronze Age relations between Egypt and the Levant, comparative mythology and its influence on the Biblical texts, and mystery cults in the Roman World.

1. Adherents to Zoroastrianism believed in the ongoing battle between Ahura Mazda and Angra Mainyu (known in later periods as Ormazd and Ahriman), the good creator god of light and order and the evil god of chaos and darkness.

2. Compare the earlier version of the story in 2 Samuel 24 in which YHWH himself is the one who incites David to sin.

This Bible History Daily feature was originally published on November 10, 2016.