What do the Dead Sea Scrolls say about Jesus?

What do the Dead Sea Scrolls say about Jesus? Nothing.

What do they say about the world in which Jesus lived? Lots.

The Dead Sea Scrolls are comprised primarily of two types of texts: parts of the Hebrew Bible (Old Testament) and sectarian works written by the small group (or groups) of Jews who lived at Qumran. The scrolls date from the mid-third century B.C.E. until the mid-first century C.E.

While the Dead Sea Scrolls do not shed light on the person or ministry of Jesus, they do illuminate practices and beliefs of ancient Judaism. Since Christianity began as a sect of Judaism, the scrolls are very important for understanding the earliest Christians and their writings—the New Testament. 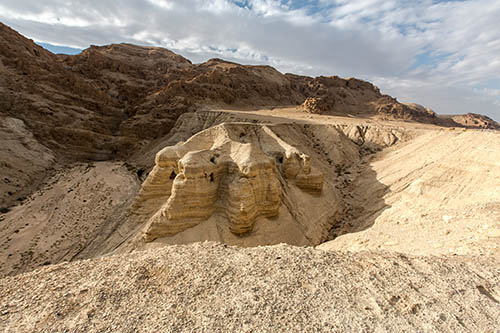 The Dead Sea Scrolls were discovered in the caves by Qumran, a site in the Judean Wilderness on the west side of the Dead Sea. James C. VanderKam explores similarities between the Dead Sea Scrolls and the New Testament in the March/April 2015 issue of BAR. Photo: “[email protected] Sea Scrolls (8246948498)” by Lux Moundi is licensed under CC-BY-SA-2.0..

In the March/April 2015 issue of BAR, James C. VanderKam, the John A. O’Brien Professor of Hebrew Scriptures in the theology department at the University of Notre Dame, examines the overlap between these two bodies of texts in his article “The Dead Sea Scrolls and the New Testament.” Dr. VanderKam was a member of the committee that prepared the scrolls for publication.

In his BAR article, James C. VanderKam explains, “The earliest followers of Jesus and the literature they produced were thoroughly Jewish in nature. As a result, the more one knows about Judaism during the time of Christian origins, the stronger basis we have for understanding the New Testament. And the scrolls are the most significant body of Hebrew/Aramaic literature related to a Jewish group or groups from roughly this time and thus are potentially invaluable for shedding light on the meaning of New Testament texts.”

What do the Dead Sea Scrolls say about Jesus? Nothing. However, they shed some light on the world in which Jesus lived. This scroll, the Messianic Apocalypse (4Q521), has a list of miracles very similar to Luke 7:21–22, even though it was written approximately 150 years before Luke’s Gospel.Photo: Israel Antiquities Authority, Jerusalem.

There is no reason to suggest that the New Testament authors knew any of the sectarian works discovered among the Dead Sea Scrolls. Further, it is quite possible that the two groups never interacted with each other. VanderKam points out that there is no overlap between the cast of characters in the scrolls and the New Testament (except for figures from the Hebrew Bible). He notes that “not even John the Baptist, who for a time lived in the wilderness and around the Jordan, not too far from the Dead Sea Scroll caves (see Luke 1:80; 3:3)” appears in the scrolls—let alone Jesus, much of whose ministry happened in Galilee.

The worldviews of early Christians and the writers of the Dead Sea Scrolls were also starkly different. VanderKam explains, “A group that set a goal of spreading its religious message to all peoples to the ends of the earth had a very different understanding of God’s plan than ones who seem to have done no proselytizing and had no interest in bringing the nations into the fold.”

Nevertheless, there are some similarities between the two groups and their writings, which make for interesting comparisons. For example, a list of miracles appears in both Luke 7:21–22 of the New Testament and the Dead Sea Scroll known as the Messianic Apocalypse (4Q521). In Luke 7, Jesus gives these miracles to the disciples of John the Baptist as proof that he is the messiah. In the Messianic Apocalypse, which was written approximately 150 years before Luke’s Gospel, the Lord is the one who will perform these miracles. The source for both of these lists is Isaiah chapters 35 and 61. While not all of the same miracles appear in Luke 7 and the Messianic Apocalypse, the miracles that do appear in both are listed in the same order (see chart).

The curious thing is that not all of these miracles, such as “raising the dead,” appear in the passages from Isaiah, which were the source material for the lists—the prophecies being fulfilled. Yet the miracle of “raising the dead” appears in both Luke 7 and the Messianic Apocalypse right before bringing “good news to the poor.” Rather than suggesting that the writer of Luke 7 copied from—or was even aware of—the Messianic Apocalypse, this similarity suggests that both groups shared certain “interpretive and theological traditions on which writers in both communities drew.”

——————
BAS Library Members: Read the full article “The Dead Sea Scrolls and the New Testament,” by James C. VanderKam in the March/April 2015 issue of Biblical Archaeology Review. Not a BAS Library or All-Access Member yet? Join today.

This Bible History Daily feature was originally published on February 16, 2015.

The People of The Dead Sea Scrolls

Tracking The Law in The Mishnah and in a Qumran Text

The Dead Sea Scrolls and Early Christianity: Part One

Enoch’s Vision of the Next World

The Dead Sea Scrolls: How They Changed My Life