Ancient Gravestone Epitaphs Give Insight into Early Jews and Christians 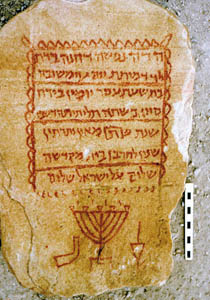 Most Jewish tombstones from Zoar (Zoora) carry Aramaic inscriptions painted in red ochre. These gravestone epitaphs give the name of the deceased, followed by the date of death and conclude with expressions of peace.

Amid the desolate, rocky wasteland of Biblical Zoar (ancient Zoora) along the southeastern shore of the Dead Sea, Konstantinos Politis and others have discovered hundreds of remarkable tombstones that preserve detailed portraits of life—and death—among the Christians and Jews who once dwelled there (see also “Ancient World’s Largest Cemetery Identified at Biblical Zoar”). The often brightly colored and intricately decorated stones are a treasure trove of information about these two communities during the fourth to sixth centuries C.E. when Zoar (then known as Zoara or Zoora) was the seat of a major Christian bishopric and also home to a significant Jewish population.

In “Tales from Tombstones” in the March/April 2012 issue of Biblical Archaeology Review, two scholars expert in interpreting the gravestone epitaphs and iconography—Professor Steven Fine and Kalliope I. Kritikakou-Nikolaropoulou—provide separate discussions of the Christian and Jewish tombstones of Zoora.

According to Fine, the Jewish tombstones from Zoora typically feature Jewish Aramaic inscriptions painted in red ochre surrounded by a decorative border. The gravestone epitaphs give the name of the deceased, followed by the day, month and year of death and then conclude with expressions of peace unto Israel. The painted texts of the Jewish tombstones are often accompanied by stylized depictions of common Jewish symbols, such as the seven-branched menorah. In addition, the Jewish tombstones provide important insight into the makeup of the Jewish community of Byzantine Zoora. From the gravestone epitaphs, we learn that Zoora had rabbis, priests and Levites, and that most Jews had common Biblical names like Jacob, Saul and Esther. Likewise, we learn that date of death on Jewish tombstones was most often reckoned by the number of years since the Roman destruction of the Temple (70 C.E.).

As discussed by Kritikakou-Nikolaropoulou, more than 400 Christian tombstones have been discovered in Zoora, almost all of which are inscribed in Greek. The gravestone epitaphs of the Christians of Zoora typically include several lines of incised text that give the name of the deceased, their age, followed by the exact date of death. The majority of the tombstones are colorfully decorated with common Christian symbols, such as the cross, birds, fish and palm branches.

As with the Jewish tombstones, the gravestone epitaphs reveal much about the Christian community of Zoora. In addition to providing the names of local Christians, the gravestone epitaphs furnish a nearly complete list of local church officials, from deacons and subdeacons to presbyters and bishops. Similarly, we find the year of death reckoned according to the number of years since Trajan’s establishment of the province of Arabia (106 C.E.).

To continue learning about Zoora’s Christian and Jewish tombstones, read the articles of Steven Fine and Kalliope I. Kritikakou-Nikolaropoulou in “Tales from Tombstones,” Biblical Archaeology Review, March/April 2012.