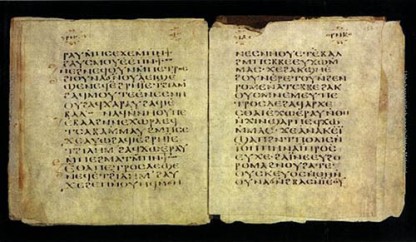 WHAT IS COPTIC, AND WHO WERE THE COPTS? Dated to the fourth–fifth century C.E., the Codex Grazier is written in the Coptic language—the fifth and final stage of ancient Egyptian language—and contains part of the Book of Acts (Acts 1:1–15:3).

What is Coptic, and who were the Copts in ancient Egypt?

The Coptic language is the final stage of ancient Egyptian language. Even though it looks very different from texts written in Old Egyptian using hieroglyphs, the two are related. In his article “Coptic—Egypt’s Christian Language” in the November/December 2015 issue of Biblical Archaeology Review, Leo Depuydt gives a short history of the development of ancient Egyptian language and shows where the Coptic language fits in that timeline, as well as answering the question: Who were the Copts.

The Coptic language developed around 300 C.E. in Egypt. It is Egyptian language written using the Greek alphabet, as well as a couple of Demotic signs. This script was much easier to learn than the earlier writing systems used in ancient Egypt: hieroglyphic, hieratic and demotic scripts.

Who Were the Copts?

Egypt’s Coptic period—also called Egypt’s Christian period—lasted 500 years, from the fourth century to the ninth century C.E., when the majority of Egypt’s population was Christian. The major shift in religion—from the old Egyptian religion to Christianity—occurred in Egypt between 200 and 400 C.E. This change was undoubtedly accelerated when Constantine declared Christianity a legal religion in 313 C.E.
We refer to Egyptian Christians from this period as Copts. (This was not a term they called themselves, nor did they refer to their language as “Coptic.”)

Another shift in religion brought about the end of Egypt’s Coptic period in the ninth century. Arabic-speaking Muslims conquered Egypt in 640 C.E. Although Christianity and Coptic remained the predominant religion and language for several centuries after the conquest, eventually most of Egypt’s population adopted the new religion, Islam, and language, Arabic, of their conquerors.

Egyptians stopped speaking Coptic between 1000 and 1500 C.E. Depuydt estimates that there were few Coptic speakers in Egypt during the 12th or 13th centuries and that by 1500 C.E., nearly everyone spoke Arabic. However, far from going extinct, the Coptic language survived—as did a Christian minority in Egypt—and is still read by the clergy of the Coptic Church today.

Egyptian language can be divided into five main stages, which mark how the spoken language changed over the course of three and a half millennia. These stages are: Old Egyptian, Middle Egyptian, Late Egyptian, Demotic and Coptic. Depuydt summarizes the stages:

The first three [stages] are (1) Old Egyptian, (2) Middle Egyptian and (3) Late Egyptian and date roughly to, respectively, the (1) Old Kingdom (2600–2100 B.C.E.), (2) First Intermediate Period, Middle Kingdom and Second Intermediate Period (2100–1500 B.C.E.), and (3) New Kingdom (1500–1000 B.C.E.). All three are written either in hieroglyphic writing, which consists of pictures denoting meanings or sounds, or in hieratic, a cursive form of hieroglyphic writing … The fourth phase of Egyptian is Demotic, written in a highly cursive form of hieroglyphs also called demotic and attested from about 650 B.C.E. onward … The fifth and final phase of the Egyptian language is Coptic, which is written with the Greek alphabet augmented by a handful of signs borrowed from Demotic. Full-fledged written Coptic emerged around 300 C.E. Coptic ceased being spoken sometime between 1000 C.E. and 1500 C.E., but the clergy has remained able to read it (more or less) down to the present day.

——————
Subscribers: Read the full article “Coptic—Egypt’s Christian Language” by Leo Depuydt in the November/December 2015 issue of Biblical Archaeology Review. Not a BAS Library or All-Access Member yet? Join today.

Learn more about Coptic texts in the BAS Library:

The Gospel of Thomas: Jesus Said What?

The Saga of ‘The Gospel of Jesus’ Wife’

Biblical Views: “What’s Up with the Gospel of Thomas?”

The Gospel of Thomas

The Gospels that Didn’t Make the Cut

This Bible History Daily feature was originally published on November 22, 2015.