Representing Cush in the Hebrew Bible 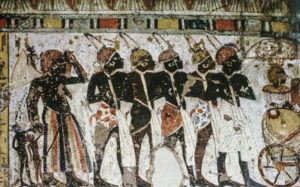 Fierce Warriors. This painting from the tomb of Huya dates to the 14th century B.C.E. and depicts Cushite warriors. Behind them stand a woman and two children. Werner Forman Archive/E. Strouhal/Hip/Art Resource, NY

In 701 B.C.E ., an African king marched into Syria-Palestine to defend Judah against the invasion of Sennacherib, king of Assyria. Second Kings 19:9 mentions “Tirhakah, king of Cush,” coming to the help of Hezekiah, who was up against the Assyrian superpower. Though the Cushites are mentioned only briefly in the biblical text, a number of scholars have argued that their involvement in the conflict against Assyria was decisive in the survival of Jerusalem at this critical historical juncture.

Who were these Cushites that came to the aid of Jerusalem? And why does the Hebrew Bible seem to give so little notice to their role in the 701 B.C.E. debacle of the Assyrians?

The Hebrew Bible mentions “Cush” (Hebrew: כוּשּׁ ) and related terms some 54 times.1 The vast majority of references to Cush as a geographical region denote the African land on the southern border of ancient Egypt, known most commonly today as Nubia. In English Bibles, Cush is most frequently translated as “Ethiopia,” but sometimes “Nubia,” “Cush,” and even “Sudan.” Because ancient Nubia occupied the northern and southern regions of present day Sudan and Egypt, respectively, it is to be distinguished from the country of Ethiopia, located in the Horn of Africa.

The 25th Dynasty of Egypt, which lasted for about a hundred years, from the mid-eighth century to the mid-seventh century B.C.E., was Cushite in origin. Comprising seven kings, of which Taharqo (biblical Tirhakah) was the sixth and most prominent, the Cushite Dynasty ruled the largest territory to exist in the Nile Valley in antiquity. Under Taharqo, the dominion of Cush stretched from the heart of the Sudanto the Mediterranean.

In the eighth and seventh centuries, Cushite Egypt competed with Assyria for control of Syria-Palestine, but after a prolonged struggle Assyria gained the upper hand, eventually conquering Egypt and expelling the Cushites from the land of the pharaohs. Under its new political capital of Meroë, the kingdom of Cush would last for yet another thousand years until its final dissolution in the fourth century C.E. The rule of the 25th Dynasty coincided with the age of the classical Hebrew prophets. Thus, the Egypt of much of the prophetic literature (e.g., Isaiah 1-40) was a territory under the dominion of the pharaohs of Cush.

Based on iconographic and textual evidence, Cushites are typically understood as a sub-Saharan African people. The Egyptians, who knew the Cushites best, consistently depicted them with black skin pigmentation. The Assyrian king Esarhaddon, who fought against Taharqo two decades after Sennacherib’s campaign to Judah, stated that Taharqo and the members of his royal family were “dark as pitch.” And the Greeks referred to both Cushites and other southern Africans as Aithiops, a term meaning “burnt of face.” For the ancient Egyptians, Assyrians, and Greeks, the blackness of the Cushite lacked the kind of racial antipathy known to the modern world. For Greek historian Herodotus, the Ethiopians are black “by reason of the sun” (Histories 2.22), and he twice refers to the southerners as “the tallest and most handsome of all men” (Histories 3.20; 3.114).

The Hebrew Bible also suggests that Cushites had distinctive physical features. Isaiah 18:2 refers to Nilotic Cushites as being both “tall” and “smooth.” Most Bible translators understand the latter adjective as describing the Cushites’ smooth, shiny skin. More directly, Jeremiah inquires, “Can the Cushite change his skin or the leopard its spots?” (Jeremiah 13:23, author’s translation). While some interpreters have taken Jeremiah’s comparison as an indication of ancient Israelite color prejudice against Africans, the Book of Jeremiah paints a most favorable portrait of Ebedmelech the Cushite. Ebedmelech is noted for risking his life to rescue the prophet from certain death (Jeremiah 38:7-13). His demonstration of faith in Yahweh earns him a personal message of salvation and security at a time when the Judean nobility would fall to the sword of Nebuchadnezzar, king of Babylon (Jeremiah 39:6, Jeremiah 39:15-18). Though obviously noted by ancient writers, physiognomic features, such as the skin color of the Cushite, did not become essentialized elements of social identity in ancient Israel or elsewhere in the ancient Near East. Cush is represented in the Hebrew Bible mainly as a martial nation. Cushites appear predominantly in military contexts, most often as allies with Egyptians, Libyans, Sabeans, and others (i.e., Isaiah 20:3-4; Jeremiah 46:9; Ezekiel 30:4-5; Ezekiel 38:5; Nahum 3:9). Cushites are known for mustering large armies with horses and chariots, making them a force to be reckoned with. According to 2 Chronicles 14:9-15, Zerah the Cushite comes up against Judah with horses, chariots, and an army of one million strong. And Isaiah 18:2 highlights the military ability of the Cushite warriors, calling them a people “feared near and far” and a nation “mighty and conquering.”

The military reputation of Cushites is also well attested in the ancient Near East, where Cushite males were revered soldiers and equestrian experts in Egypt, Assyria, Samaria, and elsewhere. Cushites were an integral part of the Egyptian army since the Old Kingdom (2649–2100 B.C.E.). Particularly during the New Kingdom (1550–1070 B.C.E.), a group of Cushites known as the Medjay served as paramilitary police in Egypt and specialized guards of the pharaohs.

Moreover, Cushite military presence is attested in Canaan more than a millennium before a people called “Israel” is known in the land. Thus, the Hebrew Bible’s emphasis on the military reputation of Cushites is well supported outside of the biblical text.

Nevertheless, despite the military emphasis surrounding Cush, representations of this foreign people serve the rhetorical purposes of the biblical authors quite well. From the perspective of the Hebrew Bible, ancient Israelite collective identity was oriented around the doctrine of election, which emphasized both the sovereign rule of the God of Israel, Yahweh, and the chosen status of Israel as Yahweh’s covenant community. The concept of Israel’s election implicates the polytheism of other nations and evokes a largely negative theological evaluation of non-Israelite groups. As a result, all alliances with foreign—and, therefore, idolatrous—nations are denounced by biblical authors.

Going back to the Assyrian invasion of 701 B.C.E., the biblical historian is far more concerned to demonstrate Yahweh’s sovereign rule over the nations than crediting the salvation of Jerusalem to a foreign people. Thus, in the late eighth century, when Judahite elites were bringing tribute down to Egypt to forge alliances with the Cushite Dynasty, they faced sharp criticism from the prophet Isaiah (Isaiah 30:1-7). Those who put their trust in Cushite-Egypt because of its abundance of chariots and horses would be greatly disappointed (Isaiah 31:1). According to Isaiah, the people of Judah would be “ashamed because of Cush their expectation and Egypt their pride” (Isaiah 20:4-5). For the prophet, it was the “mighty and conquering” Cushites who must in fact bring their tribute up “to Mount Zion, to the place of the name of Yahweh of Hosts” (Isaiah 18:7).

In a word, all foreign peoples—Cushite or otherwise—must in the end submit to the sovereign rule of the God of Israel and to his chosen people. This means that the Hebrew Bible is far more interested in a moral-theological evaluation of Cushites and other foreign peoples than in any purely ethnic or political characterization.

Kevin Burrell is Assistant Professor of Religious Studies at Burman University. His specialties include ethnicity in the Hebrew Bible, Cushites in the Bible and history, and the Book of Revelation.

1. For an in-depth study, see Kevin Burrell, Cushites in the Hebrew Bible: Negotiating Ethnic Identity in the Past and Present (Leiden: Brill, 2020).