Season after season, archaeologists have uncovered stunning mosaics at Huqoq’s synagogue in Galilee. From Biblical scenes to the first historical episode ever found in a synagogue, the mosaics’ themes never cease to amaze and surprise. Join us on a tour of the Huqoq synagogue—with its vivid mosaics and much more!


Read about the Huqoq mosaics in the BAS Library:

Not a BAS Library member yet? Join today.

More on the Huqoq mosaics in Bible History Daily: Huqoq 2019: New Exodus Mosaic: Jodi Magness answers questions about the first ancient Jewish depiction of the Elim episode from the Book of Exodus found during the 2019 season.

Analyze the ancient inscription at Huqoq: 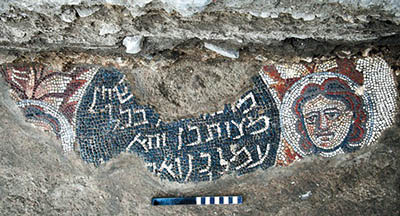 In “Samson in the Synagogue” in the January/February 2013 issue of Biblical Archaeology Review, Jodi Magness presented the 2012 mosaic discoveries from Huqoq, including a mysterious depiction of two female faces flanking a Hebrew (or Aramaic) inscription. In this online exclusive, read a translation and analysis of the inscription by David Amit of the Israel Antiquities Authority along with a discussion of who these women may have been by University of Louisville’s Karen Britt.