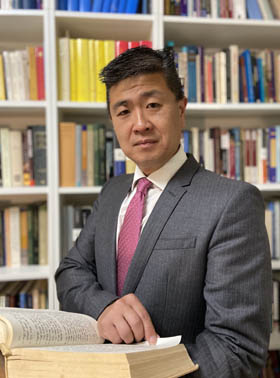 Dr. John Ahn, Ph.D., is Associate Professor of Hebrew Bible at Howard University School of Divinity (Washington, DC). He is trained in ancient Near Eastern and religious studies. He holds the Ph.D. in Religious Studies (Hebrew Bible/Old Testament), Yale University; S.T.M., Yale Divinity School (Class Marshal); M.Div., Princeton Theological Seminary (Seminary Fellow); and B.A., in Linguistics (highest GPA citation) and Religious Studies (with honors) from New York University (magna cum laude, Phi Beta Kappa). He specializes in the historical and social reconstructions of the sixth and fifth centuries BCE. Currently, Dr. Ahn is the vice-president (president elect) of Mid-Atlantic SBL, founder/chair of the “Return Migrations in Biblical Literature” (ISBL), founder/former-chair of the “Exile-Forced Migrations Group” (SBL), and section review leader for Daniel and the Book of the Twelve (NRSV-updated edition). Dr. Ahn’s monographs (authored and edited) include, Exile as Forced Migrations (de Gruyter, 2010), The Prophets Speak on Forced Migration (SBL Press, 2015), By the Irrigation Canals of Babylon (Bloomsbury, 2012), Thus Says the LORD: Essays in Honor of Robert R. Wilson (T & T Clark, 2009), and Landscapes of Korean and Korean American Biblical Interpretation (SBL Press, 2019). Two of his current projects are: the: Wilderness Wandering Tradition and an edited volume on The Last of the Kings on Forced and Return Migrations: 2 Kings 24-25.

Competing conservative and progressive expressions of religious belief are not new. In fact, the origin for such variance, at least within early Judaism, can be traced back to the fifth century B.C.E. and the period of “forced return migrations.” Major issues that resulted from forced migrations and returns included intermarriage, land ownership, identity politics, and social definition of “closed” versus “open” religious-ethnic communities. In this presentation, we examine Ezra-Nehemiah (Ezra 9–10) and the development of an exclusive or closed Jewish identify influenced by Persia in comparison with a more open, inclusive identity that developed around the Jewish communities of Elephantine in Egypt.

Studies on the fifth century BCE has been of strong interest since Frank Cross’ 1975 JBL article on the “Restoration.” The problem was initially outlined as early as 1896 by C.C. Torrey, namely, the return from Persia never happened. However, recent archaeological findings (e.g., Abraham Faust) suggest otherwise. With Oded Lipschit’s reconstruction of Ramat Rachel, a complete restoration is now offered. There are problems with these recent depictions of return and restoration, however. We address them in this lecture. We begin with a brief overview of exile (forced migrations) then turn to new concepts from “return migration studies” for a better understanding of the complex issues surrounding the fifth century BCE – not only from Persia but also Egypt, coastlands, and satellite nations like Moab (e.g. Ruth).