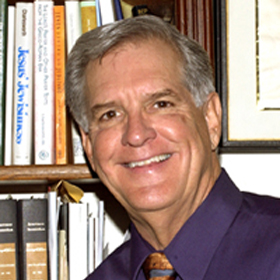 James H. Charlesworth has been a professor in Hebrew University, Jerusalem, Duke University, and the George L. Collord Profess of New Testament Language and Literature at Princeton Seminary. He also serves as president of the Foundation on Judaism and Christian Origins. He has written 90 books and edited hundreds more. He has been involved in research and archaeological explorations in Israel since 1968. He has been awarded three honorary doctorates, the Ohio Wesleyan University’s Special Achievement Award, and the Samaritan Peace Prize, among other honors.

Bible & Archaeology Fest XXV, October 8 & 9, 2022
Discovering the Tombs of David and Solomon After 50 Years of Searching

While tourists to Jerusalem are frequently shown the Tomb of David near the Christian Abbey of the Dormition just outside the walls of the Old City, they are almost certainly visiting the wrong place. Why? It is much later medieval tomb, far from the site of ancient Jerusalem where biblical tradition places the tombs of David and Solomon. Now, the tombs of the Bible’s most famous kings have been definitively identified, though remain relatively unknown. This lecture explains where the tombs are to be found in the Holy City, with insights from Dan Bahat, one of Jerusalem’s leading archaeologists.

Bible & Archaeology Fest XXII, November 22 – 24, 2019
The Spirituality of the Dead Sea Scrolls – Looking for Spiritual Nuggets in the Mines of Qumran Minds

What did the Jewish religious geniuses living at Qumran from the second century BCE to the middle of the first century CE learn that we need to know in our spiritual pilgrimage?

“The Hendler Collection” is unknown; it comprises over 562 objects found in Caesarea Maritima from 1950 to 1970 and presently housed in a vault in Israel. Yohanan Hendler is a Sabra who spent his youth scouring Caesarea especially after heavy storms. He found outstandingly important artifacts notably from the time of Herod the Great, Peter, and Paul. All realia are surface finds from Caesarea. This provenience is important, since Handeler never contaminated his collection by additions from another site. Many of the artifacts – intaglios (used for decoration and to seal documents), cameos, gems, finger rings, and metal seal boxes – help scholars understand the economic and social life of those living in Caesarea during the early Roman period when Jews, Christians, and Samaritans lived at this port built by Herod the Great. The power-point lecture will show images of unknown items including a gold brooch with 12 pearls and a garnet in the center. Such valuable items could have been seen by Peter or Paul when they were in Caesarea. At Caesarea, Sarapis and Isis personified not only the city’s fortune but were also considered healers, associated with Asklepios and Hygeia. The assimilation of Sarapis, Helios, Zeus, and Ammon into one deity helps us all comprehend the world of early Jews, like Hillel, Gamaliel I, Jesus, and Peter. These treasures are windows into the first century when Caesarea was one of the world’s leading ports. The passion to beautify oneself links us to the ancient inhabitants of Caesarea.

Where did Jesus meet Mary Magdalene? Archaeological explorations allow us to ask fresh questions. Now, excavations in Lower Galilee have revealed villages that were central to Jesus’ ministry: most notably Capernaum, Migdal, and Bethsaida. For the first time since 67 CE, we can enter a synagogue in which Jesus would have taught, as he was itinerant and spoke in the synagogues in Galilee, according to the Gospels. This power-point presentation will show seats on which Jesus would have sat and where Mary Magdalene obviously worshipped. Most of the leading archaeologists, Jews and Christians, are convinced Jesus met “Mary” in this building.

This presentation focuses on the new discoveries of first-century dwellings in Nazareth, the discovery (finally) of a synagogue in which Jesus from Nazareth probably taught, the discovery of the first-century harbor and market place in Migdal, and the excavations at Bethsaida and Capernaum. The highlight will be announcing that a book of parables that was thought to be a third-century Christian composition influenced by the Gospels is clearly a Jewish work composed in Lower Galilee during the time of Jesus’ ministry. This consensus constitutes one of the greatest paradigm shifts in Biblical scholarship of the past 50 years. The central question: “Why did Jesus break from the Biblical and Qumranic concept that God is coming as Judge and what group of Jews influenced him to change his mind?”

Mary of Migdal (Mary Magdalene) is one of the most mysterious and intriguing persons in the Bible. She becams a follower of Jesus and was at the foot of the cross. This presentation will address some of the enigmatic questions surrounding her as well as what a newly discovered synagogue in Migdal can tell us about Mary and Jesus. Why was she there? What can be known about Migdal? Did Jesus pass through it on the way from Nazareth to Capernaum? How old is the synagogue found recently at Migdal? Can we be certain that it is a “synagogue”? What are the meanings of the symbols etched on the large stone found in the synagogue? Is there any relation between the Parables of Enoch and Migdal? Was Jesus influenced by this mysterious document? Where did Jesus meet Mary of Migdal? When was the synagogue destroyed?

Before the nineteenth century, the Gospel of John was once considered an accurate description of Jerusalem. However, for the last 200 years the text has been considered a Christological creation by an author who was ignorant of Jerusalem. Yet surprisingly, recent excavations have indicated that the Gospel of John is sometimes strikingly accurate. The author knew the importance of stone vessels, describes large pools that have been unearthed, and perceives the importance of mikvaot near the Temple. This presentation examines the most recent evidence for the Gospel of John’s accuracy in its portrayal of ancient Jerusalem.

Bible & Archaeology Fest XIII, November 19 – 21, 2010
Understanding Jesus: What We have Learned from Archaeology, Research, and the Dead Sea Scrolls

Thirty years ago, a new phase in the study of the historical Jesus emerged. This new phase included archaeological science and generally excluded scholarship that was generated by faith concerns or Existentialism. New questions arose from this new era of scholarship: How can Jesus’ message be understood in light of the Apocryphal Books [the OTP and the OTA], the Dead Sea Scrolls, the Books of Enoch, and the Jewish Magical Papyri? How did topography influence Jesus’ life and message? How does sociological research help us comprehend his time and his unique claims? What has archaeology, refined by the scientific advancements since 1967, revealed about Jesus’ time? Have archaeologists finally found a synagogue in which Jesus could have taught or are the Evangelists misinformed by later developments? How and in what ways—and why—is archaeology significant for both enlightened Jewish thought and Christian faith?

In choosing sources for historical Jesus research, most scholars choose to focus on the Synoptic Gospels (the books of Mark, Matthew and Luke). Sometimes, the focus is narrowed even further to include primarily the alleged source of Jesus’ sayings found only in edited passages in Matthew and Luke. Many leading scholars judge the Gospel of John to be defined by creative theological reflections, which may be determinative for Christian faith but that are far removed from Jesus’ time and culture. Archaeologists, not influenced by theological claims, have observed that the Gospel of John knows about Jewish life in ways far superior to the Synoptics. Thanks to research on the Dead Sea Scrolls, scholars now agree that John is much more Jewish than was formerly thought. This presentation examines whether the book of John should be dismissed from Jesus research, and whether or not it preserves any reliable history about Jesus’ life and thought.