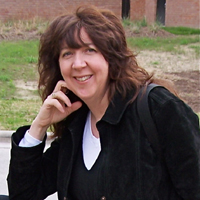 April DeConick holds the Isla Carroll and Percy E. Turner Professorship in New Testament and Early Christianity at Rice University, Department of Religion. She received her Ph.D. from the University of Michigan in 1994 in the Department of Near Eastern Studies. Since then, she has studied, written and taught on a range of topics revolving around the silenced voices of religious people and the communities that were left behind or discarded when Christianity emerged in the first four centuries C.E. as a new religion. She is the co-founder and executive editor of a new academic journal called Gnosis: Journal of Gnostic Studies published by a prestigious publishing house in Europe. She founded and chaired for years the Mysticism, Esotericism and Gnosticism group in the Society of Biblical Literature and is now Chair of the Nag Hammadi and Gnosticism group. Dr. DeConick is most noted for her writing on the Gospel of Judas when she challenged sensationalism generated by the National Geographic Society that wrongly claimed that Judas is a gnostic hero in this text and that his heroics would rewrite our understanding of early Christianity. Instead, her work shows that Judas remains demonic in the Gospel of Judas, just as he is in the New Testament gospels. Her work on this text was so instrumental that she appeared in CNN’s documentary on the Gospel of Judas that premiered in 2015 on the TV series "Finding Jesus." Her most recent book, The Gnostic New Age, has won an award from the Figure Foundation for the best book to be published by a university press in philosophy and religion.

Go with Professor DeConick on a textual dig, as she brings to life Gnostic ritual practices from ancient sources. She considers whether ancient Gnostic initiation and its ritual therapies might characterize our earliest form of psychotherapy. The evidence suggests that, prior to Freud, Jung, the behaviorists, and the cognitive psychologists of our modern world, the Gnostics developed shamanic-like therapies to resolve anxiety and stabilize the human condition, although their therapies functioned within the context of religion, rather than science and the counselor’s office. The variety of Gnostic myths and accounts of their activities focus on the origin of the human soul or psyche, how it came to be damaged, and how healing can take place within the context of religious initiation. Here lies the beginning of religion as therapy for the damaged self.

This lecture introduces the Gnostics as revolutionary religious thinkers within the ancient world and explores how this new form of spirituality changed the way that people thought about God, themselves, and their world.

In an examination of the textual and archaeological evidence for God the Mother in the earliest Jewish and Christian traditions, this presentation explores how—and why—the figure of God the Mother was erased from mainstream traditions. What was the nature of conflicts over sex and gender in the early church, and what effect did this have on the formation of the Christian institution?

One morning, Professor DeConick’s student, Grant Adamson, dropped by her office carrying under his arm a catalogue published in 1964 of the ancient gems housed in the National Library of France in Paris. He had been working through gem catalogues for his own project on ancient Gnostic magic, and had come across a gem that he thought she should see. He cracked open the book and flipped to a page in the center of the catalogue. When her eyes fell on the gem, Professor DeConick nearly fell off her chair. She was gazing upon a Gnostic secret about Judas Iscariot that had been safe-guarded and then forgotten for almost two-thousand years. During this lecture, the secret will be revealed and discussed in relation to the newly restored Gospel of Judas.

–The Thirteenth Apostle: Revised Edition: What the Gospel of Judas Really Says