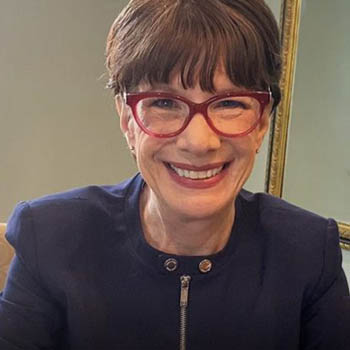 Amy-Jill Levine is Rabbi Stanley M. Kessler Distinguished Professor of New Testament and Jewish Studies at Hartford International University for Religion and Peace, and also University Professor of New Testament and Jewish Studies Emerita at Vanderbilt University. She speaks regularly on a range of topics, including the Bible, Christian-Jewish relations, and Religion, Gender, and Sexuality. Her numerous books include The Misunderstood Jew: The Church and the Scandal of the Jewish Jesus, The Meaning of the Bible: What the Jewish Scriptures and the Christian Old Testament Can Teach Us (with Douglas Knight), and the recent and highly acclaimed The Bible With and Without Jesus, co-authored with Marc Z. Brettler. A.J. is one of BAS’s most popular speakers and presents frequently at Bible & Archaeology Fest and BAS seminar retreats.

To the chief priests and scribes angered over Jesus’s reception by children in the Temple, Jesus cites Psalm 8:2, “Have you never read, ‘Out of the mouths of infants and nursing babies you have prepared praise for yourself’?” (Matthew 21:16). The Psalm’s reference to infants and its narrative placement—in the Temple, in the presence of disabled people whom Jesus heals—prompts numerous commentators to read Matthew as condemning the Temple that, in their view, is hostile to the disabled and the marginalized (symbolized by the children). Such readings are Christian apologetics that misunderstand Judaism and misquote Jewish sources. This negative preoccupation with the Temple also misses echoes of Matthew’s other references to infants, toddlers, and children, echoes that remind us that not all children testify to divine will.

Bible & Archaeology Fest XXIV, October 16 – 17, 2021
Revisiting The Bible With and Without Jesus: How Prose and Poetry become Prophecy with Marc Brettler

The Dead Sea Scrolls, the New Testament, and rabbinic literature all take passages from Israel’s Scriptures (Tanakh/the Old Testament) and repurpose them: narrative and poetic texts about the past and present become prophecy, and messages for an original audience are replaced by interpretations that fit the circumstances of later writers. Examples of such repurposing, often in the context of Jewish-Christian polemic, include how Psalm 22 is read in relation to Jesus’ death and to Queen Esther’s courage, how references to Melchizedek in Genesis 14 and Psalm 110 are read to support the role of Jesus as Great High Priest and to show how Melchizedek lost his priesthood, and how the Book of Jonah becomes both a prediction of Jesus’ death and resurrection and a message of repentance heard to this day in the Jewish tradition’s reading of Jonah on Yom Kippur.

Bible & Archaeology Fest XXIII, October 24 – 25, 2020
The Bible With and Without Jesus with Marc Brettler

Comparing Jewish and Christian interpretations of such famous passages as the creation stories, the book Jonah, Isaiah’s comments about a special child and a suffering servant, and Psalm 22, and seeing how all these texts made sense in their own historical context, we reveal what we can learn from the original contexts, why Jews and Christians interpret the same texts differently, and how in reading together we both learn from each other and see more clearly the beauty and power of Scripture.

Jesus the Jew told the Parables of the Lost Sheep, the Lost Coin, and the Lost Son(s) to fellow Jews; Luke the Evangelist adapted these accounts for (gentile) followers of Jesus. What might the parables have suggested to Jesus’ original audience? How has Luke added to their meaning? How have anti-Jewish interpretations developed? How might the original provocation of the parables still speak to readers today?

Women in an Ancient Jewish World: Separating Fact from Fiction
In looking to Jesus as a champion of women’s rights, Christian commentators occasionally portray his Jewish context and the status of women in his world as comparable to – if not worse than—conditions under the Taliban. How did this incorrect view of women’s roles in early Judaism develop and what were Jewish women’s lives really like at the time of Jesus? What were the roles of the women who followed Jesus?

Wrathful God vs. Loving God: A Theological Puzzle Resolved
The “Old Testament Deity of Wrath” versus the “New Testament Deity of Love” is a false, but popular, theological claim. How did it develop, how might it be corrected, and how might a better understanding of first-century Jewish theology improve Jewish-Christian relations today?

Jesus, Torah Law and Entry into Heaven: Misconceptions Laid to Rest
In many Christian settings, the Law (Torah) is seen as a burden, and Judaism is seen as a religion that states one must follow the Law in order to earn one’s way into heaven. Jesus is then seen as coming to end the burden of the Law. Both views are false. How does a more accurate understanding of first-century Jewish practices and beliefs both correct unfortunate stereotypes and serve to inspire both Jews and Christians today?

Christianity’s Take on the Jerusalem Temple: What History Really Tells Us
Recent studies of Jesus depict the Jerusalem Temple as the site of all evil: Over-taxation, Roman collaboration, elitism, Pharisaic legalism and peasant exploitation. How and why is the Temple used as a negative symbol of Jewish tradition in Christianity, and what corrections to this picture does history offer?

Jews and Gentiles in Antiquity: How Did They Get Along?
The view of Jesus and the Church as universalistic, multicultural and open to all versus that of the synagogue as xenophobic, ethnocentric and restricted remains a popular – and false – stereotype. What were the various early Jewish views of the Gentiles, what was Jesus’ relationship to Gentiles, and how do these views relate to the questions of “chosen people” and “salvation”?

Who Killed Jesus? Re-examining the Evidence
Jesus of Nazareth, convicted of sedition, died on a Roman cross. How then did the Jews, rather than the Romans, become known as “Christ-killers”? What accounted for the increasing vilification of the Jews in the New Testament, and what can be done to insure that these stories do not promote anti-Judaism today?