LAWRENCE MYKYTIUK MAKES one assertion I cannot make sense of (“New Testament Religious Figures Confirmed,” Summer 2021). In speaking of the high priest Caiaphas, he states that he is confirmed by his presence in Josephus, who, he tells us, “referred to him as Joseph Caiaphas” though his “name was actually Joseph, son of Caiaphas.” Since in the New Testament he is referred to as Caiaphas, and in Josephus as Joseph Caiaphas, and Dr. Mykytiuk dismisses the only other historical source he cites—the archaeological find of an ossuary containing the possible reading “Yhwsf br Qyf”—as uncertain, on what basis does he assure us that his name was actually Joseph son of Caiaphas?

LAWRENCE MYKYTIUK RESPONDS: Thank you for this question, which lets me clarify both the basis for the name Joseph son of Caiaphas and exactly what I accept and what I “dismiss.”

First-century Judeans usually did not have surnames, but had only one personal name (modern examples are Indonesia’s first two presidents, Sukarno and Suharto). In order to distinguish between two people with the same personal name, Judeans normally avoided confusion by adding their father’s name (patronym) to their personal name. Those who had personal seals, which they used to “sign” documents, gave their name, with or without the word for “son of” or “daughter of” before the father’s name. Even in his royal bulla (discovered in 2009, correctly interpreted in 2015), King Hezekiah calls himself, literally, “Hezekiah Ahaz, king of Judah”. Before “Ahaz,” modern interpreters insert the words “son of” in square brackets [ ] because, as in very many personal seals, it is understood, not written.

At first glance, “Hezekiah Ahaz” is comparable to “Joseph Caiaphas, except that what appears to be a patronym is not necessarily the name of the person’s immediate father, because the ancient Hebrew and Aramaic words for “father” can refer to any male ancestor. And there is another possibility.

Josephus, of a priestly family from Judea, used this pattern of names that he had grown up with, referring to the high priest during the latter part of Jesus’s lifetime as “Joseph Caiaphas. In the place where a patronym would usually appear, the word Caiaphas was either the name of a particular ancestor or a chosen (or accepted) nickname for the family, but either way, it functioned as if it were a surname. It is just as plausible that this high priest regarded himself as a son of the Caiaphas family as that he regarded himself as a son (male descendant) of an ancestor named Caiaphas.

“In ancient Judaism, family names (or surnames) were rare. Only families of importance were known by a name—sometimes the name of an ancestor—that members of the family carried after their first name.  That Caiaphas was a family name is suggested by Josephus, who describes the high priest as Joseph . . . ‘who was called Caiaphas.’ Joseph was the second most popular name among Palestinian Jews, a fact that renders it plausible that this long-serving high priest was known by a nickname.” (Eckhard Schnabel, Jesus in Jerusalem: The Last Days [Grand Rapids: Eerdmans, 2018], 78).

When it comes to identifying the New Testament Caiaphas in one or both of these ossuary inscriptions, however, there is a problem. Despite the authenticity of the inscriptions and the well-established gospel text, and despite the apparent match between the New Testament setting (time period and location) and the setting of the ossuary, there are no more than two traits or marks of an individual that match. These are the name and possibly family name or ancestor’s name. It takes three matching traits/marks of an individual, however, to have a virtually certain identification; with only two traits, the Yehosef/Joseph to whom the ossuary inscription refers can be no more than a reasonable candidate.

The main problem is that the ossuary makes no mention of him being a priest at all, let alone the high priest. That would have been a third trait, establishing a virtually certain identification. A potential reference to the New Testament Caiaphas in the ossuary, though possible, is not at all certain and must be “dismissed” as a certain or virtually certain reference to him. THE TRIBUTES published to Hershel Shanks (“Remembering Our Founder,” Summer 2021) are richly deserved. They also resonate with me as someone who had numerous dealings with him and contributed to his publications.

Hershel was fearless. He had no hesitation in taking up controversial causes and addressing unpopular issues. His livelihood did not depend on political correctness, and he did not have to follow the lead of archaeologists unwilling to offend their peers because of worries about money, tenure, and scorn. This gave him unmatched freedom, and he used it to the full.

His initiative and drive were irrepressible. It is often overlooked that he founded three periodicals: Bible Review, Archaeology Odyssey, and Biblical Archaeology Review, and solicited contributions for all of them from authors whom he trusted to adhere to his standards and style. In this way, he made the contents of these publications readable, informative, and even quotable!

For me, one of his most notable but least acknowledged achievements was the conference he convened at Lehigh University in 1994, on archaeology’s publication problem. On this subject, Hershel was forthright and outspoken. In “Archaeology’s Dirty Secret” (BAR, September/October 1994), he argued that “archaeologists love to dig, but hate to write excavation reports. As a result, final reports are lacking for a number of archaeological digs, even for some major excavations … To the scholars at the [Lehigh] session, it was not a dirty secret. They all knew about it, only too well.”

Since then, the problem has only gotten worse. If he were aware of how dire the situation has become, he would certainly do something about it.

I READ WITH SOME SURPRISE Regina Boisclair’s response to a reader who pointed out the inaccuracy of her claim that the use of the word ‘almah (rather than b’tulah) ruled out any prophecy of a virginal conception in the Hebrew text of Isaiah 7:14 (Queries & Comments, Summer 2021).

In her reply, Boisclair mentioned the fact that Matthew used the Septuagint, which uses the Greek word parthenos to translate the Isaiah passage. Exactly so. More than two centuries before Jesus was born, the Jewish translators of the Septuagint chose the Greek word parthenos, which unequivocally means “virgin,” to render ‘almah. This was long before the New Testament made the matter controversial; and clearly, the Jewish translators had a better understanding of the Hebrew text of Isaiah than we do. The most famous medieval Jewish Bible commentator, Rashi (who opposed Christological interpretation of the Tanakh) nevertheless explained that in Song of Songs 1:3 ‘alamot (the plural of ‘almah) means b’tulot (the plural of b’tulah

The fact is that in the seven occurrences of ‘almah in the singular throughout the Hebrew Bible, the word always refers to a young woman who is in fact unmarried and chaste. In each instance, ‘almah either explicitly means a virgin or implies it. In Genesis 24:43, it applies to Rebecca, Isaac’s future bride, already spoken of in Genesis 24:16 as a b’tulah. In Exodus 2:8, it describes Miriam, the older sister of Moses who was a nine-year-old girl. The other references are to young women playing on hand drums (Psalm 68:25 [26 in Hebrew]), young women being courted (Proverbs 30:19), and young women of the royal court (Song of Songs 1:3; 6:8). In each case the context requires a young unmarried woman of good reputation, i.e., a virgin.

Finally (and the point of Robert Vasholz’s printed comment to Regina Bosclair about b’tulah in Joel 1:8), in Biblical Hebrew, as opposed to later Hebrew, b’tulah does not always unambiguously mean “virgin,” as we learn from Joel 1:8 as well as Deuteronomy 22:19 (which speaks of a woman after her wedding night as a b’tulah).

I AM WRITING about Shelley Wachsmann’s article “The Curious Case of Noah’s … Box?” in the Summer 2021 issue. I have a few objections to his assertions about why the ark was depicted as a box on four legs. I can think of two reasons. First, it would make sense for Noah to design the ark as simply a building on legs, to protect against gradually rising waters. As a practical matter, it could also serve as a home on stilts, precisely like homes built to this day in flood-prone areas. Second, while we might assume, as Wachsmann asserts, that a boat would not be shaped like a box on four legs, we should remember that the ark’s only purpose was to float—an expedient for riding out a global flood for which there would be no land, no destination, no awaiting harbor, and no disembarking until the waters receded. If your boat has no destination, there is no reason to have a prow, oars, sails, or a streamlined bow.

I READ WITH INTEREST the article “Making an Impression: How Fingerprints Can Identify Ancient Potters” (Summer 2021). My son, Akiva Sanders, of the University of Chicago and a 2011 BAR Scholarship recipient, is actually credited by the author in another article as having “raised the profile of palaeodermatoglyphic research.” Akiva used fingerprint analysis on Bronze Age ceramics from Tell Leilan in northern Mesopotamia to investigate the change over time of the prevalence of male vs. female prints that correlated with the emergence of state institutions (Akiva Sanders, “Fingerprints, sex, state, and the organization of the Tell Leilan ceramic industry,” Journal of Archaeological Science, 57 [2015], pp. 223–238. I WAS RECENTLY READING Shua Kisilevitz and Oded Lipschits’s article “Another Temple in Judah! The Tale of Tel Moza” (January/February 2020). Given the temple’s proximity to Jerusalem, I agree that there is no way the kings would not have been aware of its existence. Certainly, reformers like Hezekiah and Josiah would have demolished any rival to the Jerusalem Temple.

But given Moza’s proximity and long use, could this temple have been a staging ground or training facility for young priests, Levites, and other temple personnel? The rituals were complex and exacting, so it would have made sense to have a training ground for new priests, coming of age to serve in the Temple. Perhaps Moza was also a place where Temple equipment was prepared or serviced. They had to make the oils, incense, and furnishings/tools somewhere. 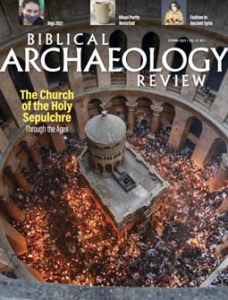 I FOUND MARY JOAN WINN LEITH’S ARTICLE “The Garden of Eden: Don’t Sweat It!” (Spring 2021) very insightful, but she seems to have left out a third scriptural reference to sweat. This is Luke 22:44, where we learn that Jesus sweat drops of blood. As she pointed out, in Ezekiel 44:18 God does not want to be in the presence of a sweating priest. Yet we are told in Luke that Jesus clearly sweat, not perspiration but blood.