Imagine that you entered a synagogue and saw somebody writing her name on the wall. Or that you visited a cemetery and spied someone with a penknife carving a message into the nearest headstone. How would you—or any reasonable bystander—react? Perhaps you would notify the local authorities. After all, acts of writing graffiti are illegal inside places of worship and burial, as they are associated with vandalism, defacement, and disrespect.

But these same types of behavior resonated differently in antiquity. The mortuary context of this menorah (cut onto a doorjamb of Catacomb 12 in Beit Shearim) suggests that graffiti were meant to somehow assist the deceased or sanctify the space. This and similar graffiti also show that—despite rabbinic disapproval of spending excessive time in impure places—some Jews spent protracted periods of time in cemeteries and burial caves, engaging spatially and corporeally with the dead and their resting places. Photo: Ezra Gabbay.

Throughout the ancient world, many people, including Jews, carved and painted words and pictures (we might call them graffiti today) in places that would shock modern sensibilities—inside and around holy spaces and shrines, pagan sanctuaries, synagogues, and churches; and throughout cemeteries, necropoleis, and tombs in regions of modern Israel, Syria, Greece, Italy, Malta, Sardinia, Tunisia, and Libya. The ancients also made their marks in other locations: upon cliffs and open-air sanctuaries along desert roads and trade routes of Egypt, the Sinai Peninsula, and Saudi Arabia; and around public theaters and hippodromes (horse racecourses) along the Syrian coast (modern Lebanon) and Asia Minor (the Asian portion of modern Turkey).

Jews and their neighbors did not write these markings to deface, destroy, or vandalize, as modern analogies might suggest. Quite the opposite—the purpose was to express piety, reverence, devotion, commemoration, love, and pride. Unlike in modern societies, acts of graffiti writing were often licit, desirable, and even encouraged.

Most people aren’t familiar with these graffiti, and many scholars and specialists still dismiss them as random and incidental scribbles. Yet examination of Judahite and Jewish graffiti, of which hundreds survive from the seventh century B.C.E. through the seventh century C.E., singlehandedly promises to transform the study of the Jewish past. As I suggest in my recent book,1 they offer unexpected insights into the daily lives and activities of the nonelite Jews who wrote them, alongside their pagan, Christian, and Muslim neighbors.

So what exactly are we talking about when we say “graffiti”? What do they look like? Some include written signatures and messages—in Greek, Aramaic, Latin, Hebrew, or Arabic scripts and languages. Others consist of abstract letters or signs. Still others depict images, such as skeletons, obelisks, quadrupeds, birds, ships, menorahs, and riders astride horses.

And Jews carved and painted these markings in different locations, including devotional spaces. For instance, upon doorways from a third-century C.E. synagogue in Dura-Europos in Roman Syria, a man called Hiya carved “I am Hiya!” multiple times. Other writers, such as a certain Ahiah, wrote prayers and requests for divine remembrance on synagogue surfaces (“remembered be Ahiah … before the Lord in Heaven!”), while still other visitors to the synagogue scratched pictures of horses into the elaborately painted walls of the assembly hall. Some Jews wrote their devotional graffiti in unexpected places, including sanctuaries, shrines, and prayer sites of pagan, Christian, and early Muslim use, throughout Syria, Arabia, and Egypt.

Jews also wrote graffiti inside cemeteries. Indeed, some of the most famous Jewish catacombs known from antiquity are encrusted with writings and pictures, which people scratched and painted during their visits. In Beit Shearim, the largest Jewish necropolis known from Roman Palestine, some writers used graffiti as a means to create public-service messages for the deceased. One person, for example, scrawled a sign around an entrance to the complex to offer well wishes to the dead, proclaiming, “Good luck on your resurrection!” Others painted curses in Greek and Aramaic above and inside of tombs to deter grave-robbers. Their writings condemned to suffer those who would disturb the surrounding graves. (“He who resurrects the dead shall judge him [who violates a tomb]!”)

Throughout these caves, as well as inside and around entrances to cemeteries in Rome, Venosa, Malta, and North Africa, Jews wrote messages and drew additional pictures, including flowers, animals, radiating suns, ships, and menorahs. These markings do not name the deceased, as do epitaphs, nor do they constitute formal modes of tomb decoration. Instead, they document otherwise unrecognized activities that ancient Jews performed inside cemeteries when visiting the graves of loved ones.

Jews in Asia Minor wrote graffiti inside public and civic spaces, such as theaters, hippodromes, and marketplaces. Some Jews who frequented a theater in the town of Miletos, for instance, repeatedly carved the message “[the place] of the Jews” into the backs of seats on middle rows of the structure; they did so to designate their favored places to congregate amidst other theater-goers. Still others carved and painted diagnostically Jewish symbols, including menorahs, around their booths and shops inside the Late Antique marketplaces of Sardis, Aphrodisias, and Tyre. These drawings occupied prominent places inside these civic complexes to proudly declare the Jewishness of their writers, even within societies dominated by pagan and Christian populations.

The historical significance of these disparate markings is remarkable. They retain information for the study of ancient Jewish life that other sources distinctly lack. This is partly because Jewish historiography still draws (nearly exclusively) from the writings and records of ancient Jewish elites. But the voices of everyday people of that period are not di-rectly accessible through their texts. The words of Philo and Josephus, for instance, are essential for reconstructing certain periods of ancient Jewish history, but the idiosyncratic interests of their highly educated authors predict the selectivity in their accounts. Rabbinic texts of the Mishnah and Talmud additionally incorporate critical discussions of Jewish daily life. But the rabbis (scholarly elites from Palestine and Babylonia) edited their works according to their own specific interests, which were often quite different from those of most contemporary Jews who lived—nearly entirely—outside of the rabbinic literary orbit.

Crucial counterparts for these literary discussions emerge from the archaeological record (mostly synagogues and burial spaces), but vestigial forms of monumental architecture, decoration, and inscriptions correspondingly reflect the tastes, decisions, and preferences of the economic elites who funded their construction. Available literary and archaeological data, which figure so prominently in Jewish historiography, can thus obfuscate the lives of nonelite (and nonrabbinic) Jews of antiquity.

Challenges, such as these, highlight the broader contribution of graffiti for the improved study of ancient Jewish history. Unlike many available documents, most (though not all!) examples of ancient graffiti were created directly by Jewish plebeians—artisans, traders, herders, sailors, and merchants—who worked hard to make their livelihoods through the sea and desert by commerce and trade. And these Jews created their drawings and personal dedications during the courses of their quotidian lives: while performing acts of daily prayer or pilgrimage, during visits to family graves, on overland work trips and sailing expeditions, attending sports competitions and theatrical displays, and even in dealings inside local market places. Their writings and drawings, in so doing, attest to associated activities that they once performed—in their own terms, in their own voice. Thus, what makes graffiti seemingly mundane is actually what makes them most significant: They index the daily activities of nonelite Jews, whose lives and behaviors otherwise elude historical report.

Contextual readings of graffiti from diverse places, periods, and contexts thus promise to transform what we think we know about Jews and Judaism throughout the ancient world. Only graffiti can demonstrate that acts of carving messages constituted devotional experiences for some Jews inside pagan sanctuaries, open cliffs, and synagogues alike. Only recurring appearances of graffiti in burial caves throughout the Mediterranean suggest that many Jews engaged in the same types of mortuary activities as their peers, which sometimes defied rabbinic prescription or record.

In many cases, only graffiti can illuminate the functional coexistence of Jews, Christians, and Muslims where contemporaneous writers consistently report their mutual antipathy. These ancient messages thereby retain rare information about the most ordinary of Jews and their neighbors, who once prayed, mourned, celebrated, loved, worked, and played throughout all corners of the ancient world.

Graffiti, of course, cannot fill in all the gaps of our historical knowledge. But more careful attention to neglected pictures and phrases can transform something forgotten into something significant, offering improved insights into the daily lives of Jews in antiquity.

Karen B. Stern is Associate Professor of History at Brooklyn College of the City University of New York. Her research and teaching focus on Mediterranean cultural history and material culture of Jews in the Greco-Roman world.

1. Karen B. Stern, Writing on the Wall: Graffiti and the Forgotten Jews of Antiquity (Princeton, NJ: Princeton Univ. Press, 2018).

Subscribers: See the full article in the BAS Library. 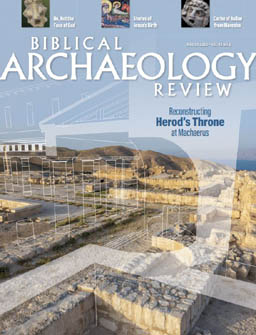 Step inside King Herod’s palace-fortress at Machaerus, east of the Dead Sea, in the Winter 2020 issue of Biblical Archaeology Review. BAR readers get a […]