Claim your personal guide to some of the most important Biblical archaeology findings—from the archaeologists themselves!

This free eBook brings together the exciting worlds of archaeology and the Bible in ten top Biblical archaeology discoveries!

Learn the stories behind Biblical archaeology finds like the Pool of Siloam in Israel, where the Gospel of John says Jesus miraculously restored sight to a blind man.

Archaeological discoveries are the puzzle pieces of the past.

Archaeologists use every piece of evidence—from the tiniest fragment of pottery to monumental ruins of ancient fortification walls—to gain insight into the civilizations that made up the ancient world. Specialists who excavate in the lands of the Bible often unearth Biblical archaeology finds that deepen our understanding of the ancient Biblical world.

In this free eBook, Biblical archaeology specialists share their stories, the excavated evidence and the insights gained from Ten Top Biblical Archaeology Discoveries, ancient artifacts and ruins where the worlds of archaeology and the Bible meet.

Archaeologist Ze’ev Meshel happened upon a handful of painted fragments of pottery in the eastern Sinai desert. These pottery shards from Kuntillet ’Ajrud are now regarded as one of the most interesting Biblical archaeology findings, a discovery that altered our perception of the early Israelite religion.

The famous Nag Hammadi Library came to the world’s attention when two peasants discovered a 13-volume library of Coptic texts hidden beneath a large boulder in Egypt.

Archaeological site surveyor Gila Cook was shocked when she accidentally discovered an inscribed stone within a newly excavated wall in Israel. The writing on the stone contains the first historical evidence of King David outside the Bible, qualifying it as one of the most valuable Biblical archaeology findings.

Of course there are countless more Biblical archaeology finds reported in each issue of Biblical Archaeology Review magazine, each more thought-provoking than the next. The ten examples in this free report are by no means exclusive; others would make different selections for their top ten. But there’s no denying that these finds do stand out.

In Ten Top Biblical Archaeology Discoveries, you’ll discover how archaeology brings the ancient world of the Bible to life, right before your eyes.

You can experience the thrill of discovery with the archaeologists themselves in your free eBook, which includes the following ten top Biblical archaeology finds.

Until the discovery of the Nag Hammadi Library in 1945, the Gnostic view of early Christianity had largely been forgotten. But when two peasants discovered a 13-volume library of Coptic texts hidden beneath a large boulder near the town of Nag Hammadi in upper Egypt, the world was reintroduced to this long-forgotten and much-maligned branch of early Christian thought. Scholar James Brashler tells the story behind the discovery and eventual publication of the Nag Hammadi manuscripts, which has all the ingredients of a spy thriller. Scholar John Monson unveils one of the closest known parallels to Solomon’s Temple: the recently discovered temple of ’Ain Dara in northern Syria. The temple at ’Ain Dara has far more in common with the Jerusalem Temple described in the Book of Kings than almost any other known building. The plan, size, date and architectural details fit squarely into the tradition of sacred architecture from north Syria (and probably Phoenicia) from the tenth to eighth centuries B.C. Few Biblical archaeology discoveries have attracted as much attention as the Tel Dan Stela—the ninth-century B.C. inscription that furnished the first historical evidence of King David outside the Bible. This in-depth chapter describes the historical moment when an excavation assistant stumbled upon the stela bearing the inscription in a newly excavated wall. Mona Lisa of the Galilee

More than 16 centuries after an earthquake destroyed the Roman city of Sepphoris, a richly colored mosaic portrait of an unnamed woman was discovered among the ruins. This chapter examines the enchanting tilt of her head and near-smile that earned her the nickname “Mona Lisa of the Galilee.” 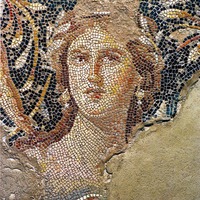 “Yahweh and His Asherah”

A handful of painted sherds discovered in the eastern Sinai desert forever changed our perception of early Israelite religion. Upon the shattered fragments of a large eighth-century B.C. storage jar is an inscription that referred to “Yahweh of Samaria and his Asherah.” Scholar Ze’ev Meshel explains how these painted pottery fragments provide a fresh perspective on the religious life of ancient Israel as well as archaeological evidence that Israelite religion—far from being the single monolithic Yahwistic faith depicted in the Bible—was practiced and understood in a variety of ways.

More than 25 years ago, archaeologists discovered a simple first-century A.D. home in Capernaum that may have been inhabited by Jesus during his Galilean ministry. According to the excavated material remains, the function of the house appears to have changed dramatically, becoming a place for communal gatherings, possibly even Christian gatherings. Scholar James F. Strange and Biblical Archaeology Review editor Hershel Shanks present layer upon layer of circumstantial evidence to support the house’s importance in earliest Christianity and its association with Jesus and his foremost disciple, Peter. The Siloam Pool in Jesus’ Time

In 2004, during construction work to repair a large water pipe south of Jerusalem’s Temple Mount, on the ridge known as the City of David, archaeologists excavated part of a monumental pool where Jesus performed the miracle of restoring sight to a blind man in the Gospel of John. Biblical Archaeology Review editor Hershel Shanks discusses the validity of this claim as well as the original purpose of this pool. Bathing? Drinking? Swimming? Scholar Lawrence E. Stager describes the discovery of the oldest known monumental arch, found in southern Israel in 1992, originally built during the Middle Bronze Age, c. 1850 B.C. An ancient roadside sanctuary discovered during the same dig revealed something even more remarkable: an exquisitely crafted statuette of a silver calf. Jerusalem’s unique 12-story-high foundational structure—the largest Iron Age construction in Israel—appears to have been vital to the organization and defense of the City of David. Perhaps more than any other find from the City of David, the massive Stepped Stone Structure stands as a momentous reminder of just how grand David and Solomon’s Jerusalem might have been. Although at first glance it appears to be little more than a towering mass of twisted stone and rubble, it likely supported a major fortress or administrative building. Scholar Jane Cahill West explores this monumental structure. Uncovered during excavations in Jerusalem’s Jewish Quarter during the 1970s, this 22-foot tower, with walls 12 feet thick, helped defend Jerusalem against the Babylonian invasion in 586 B.C. Around the base of the tower, a thick layer of charred wood, ashes and soot bore witness to the raging fire that accompanied the Babylonian destruction. Among the charred rubble, excavators found five arrowheads: four of iron, and one of bronze. The bronze arrowhead was of the Scytho-Iranian type used by the Babylonian army. The iron arrowheads were typical of those used by the Israelites. Lying in the ashes, these five small artifacts gave poignant testimony to the furious clash that preceded the fall of Jerusalem.

We’ll send you a link to download your copy of Ten Top Biblical Archaeology Discoveries and offer you a FREE registration to the Bible History Daily newsletter, bringing the world of the Bible and archaeology directly to your inbox. Your FREE registration to Bible History Daily introduces you to community discussions on fascinating topics like the Dead Sea Scrolls, top Biblical archaeology discoveries, ancient Israel and Easter.