Ancient societies often don’t leave behind complete descriptions of their lives. Every source of information can help modern researchers understand better, even what the members of the society threw away. A study of refuse mounds has found meaningful information about how agriculture was conducted in the Negev of late antiquity.

By looking at trash deposits from the Byzantine Islamic sites Shivta, Elusa, and Nessana, the researchers were able to discover a change in how people handled livestock dung. Early in this period, Dung was a valuable resource, both for fuel and to be spread on fields for large-scale agriculture. The refuse showed little raw dung, but plenty of dung ash.

Later, into the Early Islamic period, more raw dung was found to have been discarded. The authors conclude that taxation, and a shift to rural villages, disincentivized large-scale agriculture, and the fertilization efforts that went with it.

Jerusalem’s Rural Food Basket: The “new” archaeology looks for an urban center’s agricultural base by Gershon Edelstein and Shimon Gibson. Until recently, archaeology—or at least Near Eastern archaeology—has been regarded primarily as a historical science. Its focus was history and particularly political history—kings and kingdoms, battles and destructions, the rise and fall of civilizations.

The Scarab: The Idol That Rolls in Dung by Zohar Amar. In 2018, a sensational discovery was made in a cemetery in Saqqara, Egypt, dating to the Fifth Dynasty (mid-third millennium B.C.E.). Archaeologists found two small stone coffins decorated with scarabs. One of them contained some 200 dried dung beetles, and the other held two mummified dung beetles—known as sacred scarabs—wrapped in linen.

Finding Evidence of Ancient Nomads by Steven A. Rosen. Recent research1 has revealed that, contrary to earlier ideas,2 nomads leave plenty of remains; finding them is simply a question of looking. We can now go beyond Holmes’s feat of simply dating the remains and noting their presence; archaeologists can make reasonable guesses about the nomadic seasonal round and about relations between nomads and their settled cousins. This kind of data is especially useful to Biblical archaeologists who study Iron Age settlements in the Negev that provide the background for the Israelites’ emergence in Canaan. 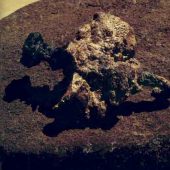