The silver coin with the words “Shekel of Israel” and the Old Hebrew letters shin and bet, used to designate the second year of the First Jewish Revolt.
Credit: Eliyahu Yanai, City of David.

The Israel Antiquities Authority (IAA) recently announced the discovery of a 2,000-year-old silver coin in Jerusalem’s City of David Archaeological Park. Archaeologists believe the coin, which is made of pure silver and weighs approximately half an ounce, was likely minted within the Jerusalem Temple itself. On one side of the coin are the words “Shekel of Israel,” written in Old Hebrew script, along with a depiction of a chalice and the Hebrew letters shin and bet, shorthand for “second year.” Based on this, archaeologists were able to confidently date the coin to the second year of the First Jewish Revolt against Rome, which began in 66 C.E. The coin’s reverse has the words “Holy Jerusalem” and an image of three budding pomegranates, thought by some to a symbol of the Temple’s high priest.

Although many bronze coins have been discovered from the Jewish revolt, only about 30 silver coins have been discovered in the area around Jerusalem. It is thought that these were minted in the Royal Stoa on the Temple Mount, as only the Temple treasury would have had access to sufficient quantities of silver required for a mint. Such coins were likely minted in coordination with rebel leaders in an attempt to rid the city of Roman occupation. According to Robert Kool, director of the IAA’s coin department, “we can say with caution that this coin is, apparently, one of the only items we can hold today that originated on the Temple itself.”

During the first century C.E., the Temple Mount was the site of extensive economic activity, as famously criticized by Jesus in John 2:13–16. However, the Temple itself also held vast quantities of riches. As recorded in a dedicatory inscription, the Roman emperor Vespasian had the famous Colosseum of Rome constructed with spoils from the conquest of Jerusalem. The Arch of Titus likewise displays the great wealth taken from the Temple. 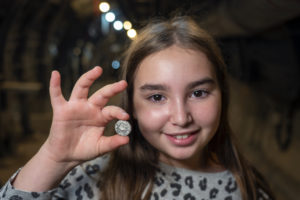 The silver coin, held by the girl who discovered it.
Credit: Yaniv Berman, City of David and the Israel Antiquities Authority.

The coin was discovered by an 11-year-old girl as part of the Emek Tzurim Sifting Project in the City of Jerusalem. According to Kool, “A currency is a sign of sovereignty. If you go into rebellion, you use one of the most obvious symbols of independence, and you mint coins. The inscription on the coin clearly expresses the rebels’ aspirations. The choice to use ancient Hebrew script, which was no longer in use at the time, is not accidental. The use of this script came to express the longing of the people of the period for the days of David and Solomon and the days of a united Jewish kingdom—days when the people of Israel had full independence in the land.”