The Brutality of the Crusades 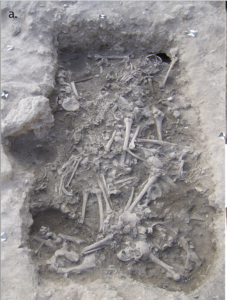 Textual sources are generally our primary source of information about the life and death of soldiers who fought in the Crusades (11th–13th centuries C.E.). Similarly, while there is ample archaeological evidence of the battles for specific towns and cities, few gravesites or cemeteries associated with battles have been discovered. A recently excavated mass grave site in Sidon, Lebanon, however, has provided new evidence of the brutality of crusader warfare.

According to a recent academic article, the grave includes the remains of at least 25 men and teenage boys who appear to have died in battle. Upon examination, many of the bones bore signs of extreme trauma inflicted by a range of weapons, including axes, swords, spears, and maces. Many of the wounds were located on the head, neck, and back areas, suggesting to the researchers that most of the victims were likely infantrymen who were struck down as they retreated from a cavalry charge. In addition, evidence from healed wounds indicates that the men were likely professional soldiers rather than common citizens called upon to defend the city. Fourteenth-century miniature from William of Tyre’s Histoire d’Outremer of a battle during the Second Crusade. National Library of France, Department of Manuscripts, French 22495 fol. 154.
Credit: Public domain, via Wikimedia Commons

Although it difficult to associate the bodies with a particular battle, some of the remains have been carbon dated to the mid-13th century. Textual sources from this time record two separate attacks on Sidon—an assault by the Mamluks in 1253, and an assault by the Mongols in 1260.

Sidon, located between Beirut and Tyre, came under the control of the European powers after the First Crusade (c. 1097–1099). The city became an important port settlement of the Frankish forces during the 13th century. DNA analysis of eight of the bodies showed that three of the soldiers were of European origin, while another three were Middle Eastern, and two had mixed ancestry. All these findings further corroborate written accounts of warfare during the Crusades and provide dramatic confirmation of the period’s brutal fighting methods and tactics.

What Were the Crusades and How Did They Impact Jerusalem? by: BAS Staff

An Unexpected Consequence of the Christian Crusades by: BAS Staff

A Smithy in a Crusader Church by: Dan Bahat

The Rugged Beauty of Crusader Castles by: Adrian Boas