A recent surprise discovery has shed light on the gruesome execution practice of Roman crucifixion. As first reported in the magazine British Archaeology, a team excavating several graves at a site near Fenstanton in southeastern England came across the remains of a person executed by crucifixion during the second century C.E. Despite crucifixion being a relatively common method of Roman execution, this is only the fourth time an archaeological find has provided direct evidence of the practice. Similar to the previously discovered examples, including the remains of a crucified individual found in a first-century tomb in Jerusalem in 1968, the Fenstanton burial preserves evidence of the nail that pierced the individual’s heel bones during the crucifixion. Analysis of the remains has shown that the victim was a man, likely in his late 20s, who lived around 1,800 to 1,900 years ago during the period of Roman control over Britain. At only a few inches in length, the nail was driven into the man’s heel bone, barely protruding out the other side. The excavators also noted that there was a second, smaller indentation in the bone, which they believe may have been a “misfire” where the nail failed to go through the bone on the first try. The burial also contained the remains of a wooden structure, possibly a bier, upon which the man’s crucified body would have been laid. Skeletal remains of a man in his late 20s who was the victim of Roman crucifixion. Photo: Adam Williams, courtesy of Albion Archaeology

In addition to the marks left on the victim’s bones due to crucifixion, numerous other signs of healed injuries were identified, indicating severe trauma suffered throughout the man’s life. A thinning of the man’s fibulae, for example, indicated that he might have been kept in bondage for a prolonged period, perhaps as a slave. The excavators explored several other options to explain the nail in the man’s heel. However, none was seen as plausible, and the team concluded that the practice of Roman crucifixion offers the best explanation.

The team uncovered more than 40 additional gravesites at Fenstanton, indicating that the area was used as one of the settlement’s primary burial sites and, equally significant, that the crucified man’s remains were treated with the same care as other burials. This is quite unusual, as those executed by crucifixion—often criminals—were typically not buried in community gravesites or tombs. This is part of the reason only three other examples of crucifixion have been identified in archaeological contexts, with one coming from Italy, one from Egypt, and one from Jerusalem. The Fenstanton remains indicate that, regardless of the crime for which the man was crucified, he was viewed by the local community as deserving of a proper burial. Indeed, DNA analysis of the remains indicates the man was local to the area and not from somewhere else within the vast Roman Empire. Unfortunately, it will never be known for what crimes he was crucified.

How Did the Romans Crucify Someone? 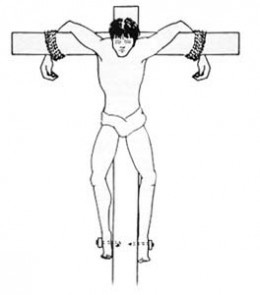 There are two main reasons that so few examples of Roman crucifixion have been found. First, crucifixion was typically carried out with ropes as opposed to nails. Because of this, the skeletal remains of most victims of crucifixion would bear few signs of the trauma they endured. Second, as noted above, crucifixion victims would rarely have received a standard burial. This Fenstanton discovery is an exception to the rule, as was the example from Jerusalem, which was discovered in 1968 within the tomb of a prominent family, who had clearly taken their executed relative and buried him within the family tomb.

This new example adds to the evidence of the Roman crucifixion process and helps to answer the question of where were the nails placed in crucifixion. In contrast to how crucifixion is depicted in Christian iconography, the feet of the victim would not have been nailed together on the front of the cross. Instead, the heels would have been nailed to either side of the cross. This would not have been to position the body, but rather to prevent the victim from being able to lift themselves with their feet. This corresponds well to early depictions of crucifixion. Two more nails would have likely been drilled into the hands of the victim, as indicated in the Gospel of Luke (24:39).

To learn more about the history and methods of Roman crucifixion, see the Bible History Daily post “Roman Crucifixion Methods Reveal the History of Crucifixion.”