Were they bringing sacred gifts or simply medicine? 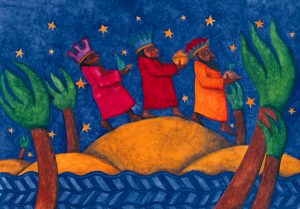 Since the early days of Christianity, Biblical scholars and theologians have offered varying interpretations of the meaning and significance of the gold, frankincense, and myrrh that the magi presented to Jesus, according to the Gospel of Matthew (2:11).

Our Three Magi collection in the Biblical Archaeology Society Library reveals different interpretations of the “three wise men,” as they are most commonly known, and why they brought gold, frankincense, and myrrh to Jesus.

Did the magi “from the east” know of frankincense’s healing properties when they presented it to young Jesus? Are the gifts simply symbolic, or were they based on tradition?

Discover more when you read “The Magi’s Gifts—Tribute or Treatment?” as a part of The Three Magi collection in the BAS Library. The three “wise men from the east” appeared in Jerusalem inquiring, “Where is he who has been king of the Jews? For we have seen his star in the east, and have come to worship him” (Matthew 2:1–2).

What exactly was this star? In “What Was the Star that Guided the Magi?” by Dale C. Allison, Jr., we learn that Matthew told us that it “went before” the magi, and that “it came to rest over the place where the child was” (Matthew 2:9).

This is surely strange behavior for a star.

Over the centuries, commentators have suggested that this star was a planetary conjunction, a comet, or a supernova, a so-called new star. However, a lighted object high in the sky guiding someone on the earth below to a precise location simply makes no sense.

What then are we to make of Bethlehem’s star, whose behavior is so at odds with current knowledge? The answer lies in how the ancients understood stars—which was not at all as we do. You can discover the clues that lead to a correct understanding, in “What Was the Star that Guided the Magi?” in The Three Magi collection within the BAS Library. You may be surprised to learn that neither their names, their number (three), their physical descriptions, nor the date of the magi’s arrival appears in the Bible.

Robin M. Jensen writes in “Witnessing the Divine” that their assumed number was undoubtedly derived from the three gifts presented to Jesus in Matthew. The number wasn’t always taken for granted, however. A wall painting in the Roman catacomb of Domitilla shows four magi; one in the catacomb of Peter and Marcellinus depicts two. A variety of Syrian documents name 12.

What may be the most impressive and influential understanding of the magi weaves together many of the interpretations expressed by the church fathers: that the magi were the world’s first witnesses to the Trinity. This explains their appearance in almost all artistic images and literary traditions as three men, different, but alike.

Discover more about the true origination of the “three” magi, in “Witnessing the Divine” in The Three Magi collection within the BAS Library.

Discover the evidence-based truth about the history of the magi

For scholars both professional and lay, there is almost nothing more exciting than challenging traditional thought. That’s why this Special Collection from the BAS Library is already one of our most popular among our members.

You can experience it an All-Access Pass! Here’s what’s included in The Three Magi Special Collection: