Mary Magdalene, Jezebel, Rahab, Lilith. Today, each is considered one of the most scandalous women in the Bible. Are these so-condemned salacious women misrepresented? Have they been misunderstood? In this Bible History Daily feature, examine the lives of four women in the Bible who are more than they seem. Explore the Biblical and historical texts and traditions that shaped how these women are commonly viewed today. Was Mary Magdalene a Prostitute?

Was Mary Magdalene a prostitute who repented or simply an influential female follower of Jesus? Mary from Magdala has popularly been saddled with an unfavorable reputation, but how did this notion come about? In “From Saint to Sinner,” Birger A. Pearson examines how Mary Magdalene’s notoriety emerged in the early Christian tradition. Pearson writes that later interpreters of the Gospels attempted to diminish her “by identifying her with other women mentioned in the Gospels, most notably the unnamed sinful woman who anoints Jesus’ feet with ointment and whose sins he forgives (Luke 7:36–50) and the unnamed woman taken in adultery (John 7:53–8:11).”

Read “From Saint to Sinner” by Birger A. Pearson as it originally appeared in Bible Review.

Who Was Jezebel? How Bad Was She?

Who was Jezebel? For over 2,000 years, Jezebel, Israel’s most accursed queen, has been condemned as a murderer, a temptress and an enemy of God. Who was Jezebel, really? Was she really that bad? In “How Bad Was Jezebel?” Janet Howe Gaines rereads the Biblical narrative from the vantage point of the Phoenician wife of King Ahab. As Gaines writes, “To attain a more positive assessment of Jezebel’s troubled reign and a deeper understanding of her role, we must evaluate the motives of the Biblical authors who condemn the queen.”

Read Janet Howe Gaines’s article “How Bad Was Jezebel?” as it originally appeared in Bible Review.

In the BAS book Feminist Approaches to the Bible, four outstanding scholars—Phyllis Trible, Tikva Frymer-Kensky, Pamela J. Milne and Jane Schaberg—look closely at a number of prominent women in the Bible, including Eve, Miriam and Mary Magdalene, as well as the men to whom they relate.

As described in the Book of Joshua, Rahab (a heroine nonetheless known as “Rahab the Harlot”) assisted two Israelite spies in escaping down the city wall of Jericho. Was Rahab a Biblical prostitute? While the Biblical text identifies her as a zônāh, a prostitute (Joshua 2:1), Josephus reports that she kept an inn. Anthony J. Frendo critically examines the textual evidence.

Read about Anthony J. Frendo’s conclusions on Rahab the Harlot. 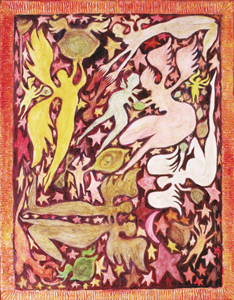 Who is Lilith? Courtesy of Richard Callner, Latham, NY.

Fertile mother, wilderness demon, sly seductress—the resilient character Lilith has been recast in many roles. Who is Lilith? As Janet Howe Gaines writes, “In most manifestations of her myth, Lilith represents chaos, seduction and ungodliness. Yet, in her every guise, Lilith has cast a spell on humankind.” Follow Lilith’s journey from Babylonian mythology, through the Bible, to medieval lore and modern literature in “Lilith” by Janet Howe Gaines.

The Bible History Daily feature “Scandalous Women in the Bible” was originally published on April 28, 2014.