Aerial view of the City of David. Credit: Madain Project

As recounted in 2 Kings 11–12, King Joash reigned over Judah for 40 years, making him one of the southern kingdom’s longest-reigning monarchs. The account in 2 Kings focuses on his dedication to repairing the Jerusalem Temple. However, just as his reign began with the coup and assassination of his grandmother, Queen Athaliah, so too did it end with his assassination at the hands of his servants. “His servants arose, devised a conspiracy, and killed Joash in the House of Millo, on the way that goes down to Silla” (2 Kings 12:20). The biblical description of Joash’s assassination includes an important historical detail—the precise location where it took place—but where exactly is the “House of Millo” (Beit Millo in Hebrew). A recent study published in the Journal of Biblical Literature proposes a new and intriguing solution.

A New Proposal for the Beit Millo

Many options have been put forward for the location of the Beit Millo and the Millo in general. One of the more common theories is that the Millo was the ancient name for the famous Stepped Stone Structure found within the modern-day City of David Archaeological Park (see, for example, Nadav Naʼaman’s article, “The Interchange Between Bible and Archaeology: The Case of David’s Palace and the Millo,” in the January/February 2014 issue of Biblical Archaeology Review). The Stepped Stone Structure, one of the proposed sites of the Millo.
Credit: Nathan Steinmeyer

The new study, however, rejects this traditional identification and instead identifies the Millo with the area of Jerusalem’s Gihon Spring. This idea rests on a new analysis of biblical and linguistic information regarding the Millo, coupled with recent archaeological evidence of the large fortifications that protected the spring during the Iron Age. According to the study, the spring’s fortifications were known to the biblical writers as the Millo, and the Beit Millo was a specific and well-known building found among them. The Middle Bronze Age fortifications around the Gihon Spring, another proposed site of the Millo. Credit: Nathan Steinmeyer

This theory may help explain the prominence of the Gihon Spring and the Millo in Jerusalem’s early history as the capital of Judah. In 1 Kings 1, the Gihon Spring is recorded as the location of Solomon’s inauguration, while 1 Kings 11 notes that the construction of the Millo was one of the main factors in Jeroboam’s rebellion against Solomon (1 Kings 11:26–27). Numerous other biblical events take place in connection to the Gihon Spring, which was the main water source of Jerusalem for much of its history. According to the study’s authors, the assassination of King Joash may have simply been one of the last and more gruesome events to have unfolded at this well-known location within Jerusalem.

Location of the Millo in the Biblical Narrative The Gihon Spring, the main source of water for Jerusalem and a possible site of the Millo.
Credit: Madain Project

The term Millo appears seven times in the Hebrew Bible (2 Samuel 5:9; 1 Kings 1; 1 Kings 9:15; 1 Kings 11; 1 Kings 9:24; 2 Chronicles 11:8; 2 Chronicles 32:5). The 2 Samuel passage specifically mentions that “David built the city all around from the Millo inward.” In this case, the Millo is presented as pre-dating David’s conquest of Jerusalem and being located near the edge of the city. The other biblical passages frequently mention the Millo’s association with major building and fortification projects, providing a clear indication of both the site’s importance within Jerusalem and its connection with fortifications.

Location of the Millo in Linguistics The Stepped Stone Structure, one of the proposed sites of the Millo.
Credit: Nathan Steinmeyer

The Hebrew word Millo comes from the verb ml‘, meaning “to fill.” Many scholars have therefore traditionally understood the Millo to refer to a large constructional fill made of stones and earth. Thus, architectural features like the Stepped Stone Structure—a huge, terraced buttress of stone and earth—have often been identified with the Millo. Only twice in the Hebrew Bible, however, does the verb ml‘ imply filling with stones and dirt. Rather, the verb is almost always used to describe filling with water, which is also how the word is regularly used in other Semitic languages. In Akkadian, for example, the term malû typically means to fill a cup with liquid, or even to fill a canal with water. And since at least the early Islamic period (c. 634–1099 C.E.), one of the largest pools supplying water to Jerusalem has been known by the Arabic name Birkat Mamilla. The authors of the new study therefore argue that it is far more fitting for the biblical Millo to be connected with a water installation than a large constructional fill.

Location of the Millo in Archaeology

The new study proposes six main features of the biblical Millo: 1) It predated the reign of King David; 2) It was in existence until at least the time of Hezekiah (r. 715–687 B.C.E.); 3) It was on the edge of the City of David; 4) It was an important, well-known location; 5) It was closely associated with fortifications; and 6) It had a connection to water. The only known architectural feature in Jerusalem that fits all six criteria is the fortified area surrounding the Gihon Spring. Archaeological examinations of the spring’s fortifications have shown that they were likely first constructed during the Middle Bronze Age (c. 2000–1550 B.C.E.) but underwent significant renovations during the Iron Age IIA (c. 1000–925 B.C.E.), during the reigns of kings David and Solomon. After the intense efforts by Hezekiah in the late eighth century to expand Jerusalem’s fortifications against the Assyrian threat, however, the spring’s defensive fortifications would have become unnecessary. 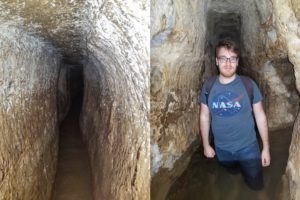 The author exploring Hezekiah’s tunnel, constructed to divert water from the Gihon Spring to the Siloam Pool. Credit: Nathan Steinmeyer

What Are These Strange Markings Found Near Jerusalem’s Gihon Spring?