Read Elie Wiesel’s essay on Jethro in the Bible as it originally appeared in Bible Review, June 1998.—Ed. 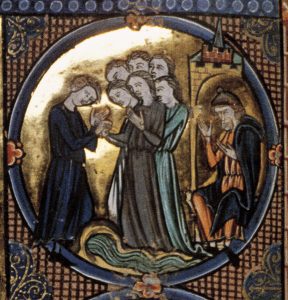 Bodelian Library, Oxford, MS Bodley 2708, Folio 39V
A good man? Moses’ father-in-law, Jethro, is a devoted family man, well respected for his advice on governing and his benevolent leadership of the tribes of Midian. This early 13th-century illustration from the Bible moralisée depicts Jethro (seated under the arch on the right) rewarding Moses (left) for rescuing his daughters (six of whom are pictured in the center) and their flocks from rival shepherds. Grateful, Jethro invited Moses to stay and break bread with him: “Moses consented to stay with the man, and he gave Moses his daughter Zipporah as wife” (Exodus 2:21).
Later, when Moses returns from freeing the Israelites from Egypt, Jethro proclaims the Israelite God’s glory, saying, “Now I know that the Lord is greater than all gods” (Exodus 18:11). But, asks the midrash, was Jethro motivated by love of God or by fear of a divine force so powerful as to rescue the Israelites from their enemies?

On first reading the biblical text, Jethro seems a simple person, almost monolithic, someone who impresses us most as a family man. When he meets a young refugee, Moses, whom he believes to be Egyptian, he thinks immediately of his daughter Zipporah, who is not yet married (Exodus 2:20–21). Later, when Moses, who is now Jethro’s son-in-law, returns from Egypt at the head of his freed people, Jethro brings to him his wife, Zipporah, and their two children (Exodus 18:5).

Moses has in the meantime become powerful and famous, and Jethro gives him useful advice on how to govern (Exodus 18:17ff). Invited by Moses to join the newly created nation, Jethro gracefully declines by invoking his obligations to his own family and tribe in the land of Midian (Numbers 10:29–30).

One can see Jethro clearly: His demeanor is surely elegant, sincere, irreproachable. He is present only when needed. He speaks only when asked. Everything he does, he does without guile. He never thinks of taking advantage of his position as first counselor to the great leader Moses. No one would ever accuse him of nepotism.

In the midrashic literature,a as always, the character, or rather the attitude toward the character, seems more complex. To be sure, Jethro is shown in a positive light. After all, if Moses treats him with such deference, such respect, as to kneel before him, Jethro must deserve it. The sages go so far as to exaggerate his virtues. For most, he is considered to have converted to the Jewish faith. They call him Ger shel emet—a genuine convert or a convert to the truth. He is placed “within the shelter or on the wings of the shekhina,” God’s holy presence or glory. They put these words in Jethro’s mouth: “I have served many idols; there is no god I have not served; but none can compare to the God of Israel.” To emphasize his worth, he is compared to Esau. Even though Esau was a kinsman of Jacob, he was less favored than the alien Jethro.

Better yet, on at least two occasions in the midrash, Jethro is considered more admirable than Moses himself. In the first, when Jethro offers his daughter Zipporah to Moses, Jethro tells Moses: She will be your wife, but on one condition—your first son will be consecrated to idolatry. The stupefying thing is that Moses accepted! In other words, in this account Jethro appears more loyal to his faith than Moses does to his.

On the second occasion, Jethro, having heard all that the people of Israel have suffered in Egypt, and how God has saved them on their flight from the landing saved you.” According to the commentary of one sage (Reb Papos), this passage may be intended as a criticism of Moses and the 600,000 men and women who were with him. It is meant as a reproach for their ingratitude: “Despite all the miracles that were performed for you, you have not believed enough to praise the Lord until Jethro did.”

Having said all this, even though Jethro has no detractors, he does inspire a certain skepticism in some. Is this a way of balancing our understanding of the man? Perhaps. In the Bible, no one is perfect—neither perfectly good nor absolutely evil.

Thus some of the sages ask what are the real motives behind Jethro’s close feelings for Israel. Was it because of the Torah that God gave to His people? Or was it because of the defeat the Israelites inflicted on their enemies, the Amalekites? In other words, was Jethro motivated by love or by fear of this powerful God who makes other nations tremble? “Vayihad Yithro” the Bible says (Exodus 18:9). “Jethro rejoiced” at all the goodness that the Lord had shown to Israel. But vayihad Yithro could easily mean “his flesh crawled [with fear], he had goose bumps.”b

Nonetheless, the general impression of the man is that he is better than good; he is glorious. Even when he refuses Moses’ invitation to stay with him, he has the perfect excuse, says the midrash: “I will return to my own people and convert them all to the study of the Torah.”

The practical and very timely lesson that our sages draw from this story: When a man comes and asks to be converted, we should not send him away.

Translated from French by Anne Renner.

a. Midrash is a genre of rabbinic literature that includes nonliteral elaborations of biblical texts.

b. The word vayihad is related to the Aramaic chiddudim, “prickles.” One Jewish Bible commentary explains that Jethro was so overcome with joy that he felt goose bumps. The great medieval Jewish commentator Rashi, however, says that despite Jethro’s happiness for the Israelites, he felt prickles of unease over the fate of the Egyptians.

The author of more than 30 novels, plays and profiles of Biblical figures, Elie Wiesel received the Nobel Peace Prize in 1986. This online publication is adapted from Wiesel’s article “Supporting Roles: Jethro,” which was published in Bible Review in June 1998. At the inception of Wiesel’s Supporting Roles series in Bible Review, BAS editors wrote: