This is the second of two posts written by Dr. Robin Branch on Barnabas, an early church leader. The blogs are condensed from a longer article by Dr. Branch titled, “Barnabas: Early Church leader and model of encouragement,” In die Skriflig 41.2 (2007): pp. 295-322. To read part one, click here. 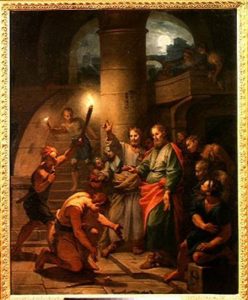 A noticeable trait of Barnabas, a prominent early church leader fondly nicknamed Son of Encouragement (Acts 4:37), is that he seeks out and assists others. The Biblical text highlights this twice with Saul/Paul (9:26-28; 11:25–26), once concerning the vibrant church in Antioch, Syria (11:19–30) and once in connection with his younger kinsman, John Mark (15:36–41). Often these other individuals and groups are believers in Jesus who, for whatever reason, run a bit against the grain of mainstream thought and action. Instead of ostracizing them, Barnabas not only deliberately encounters them, but also listens to them and welcomes them warmly.

First, Barnabas befriends Saul. Acts introduces Saul as a persecutor of believers in what was then known as the Way (Acts 7:58; 8:1–3; 9:2). Saul obtains letters from the high priest in Jerusalem to officials in Damascus synagogues authorizing him to bind new believers and bring them to Jerusalem. On the road to Damascus, he has a literally blinding conversion experience with the risen Lord Jesus, becomes a believer himself and starts preaching that Jesus is the Son of God in the Damascus synagogues (9:1–20)!

Saul’s sudden change of character and bold preaching lead the Jews to conspire to kill him. Saul travels to Jerusalem after being lowered from the walls of Damascus in a basket to escape the city by night (9:21–26). The disciples in Jerusalem fearfully avoid him, not believing he really is a believer (9:26). Luke writes: “But Barnabas took him, brought him to the apostles, and described for them how on the road he had seen the Lord, who had spoken to him, and how in Damascus he had spoken boldly in the name of Jesus” (9:27).

This verse merits scrutiny, for it illustrates leadership in action. Barnabas seeks out Saul, and thus Barnabas exhibits personal courage, for he risks his life and reputation. Barnabas brings Saul to the apostles. His ethical attitude of listening, testing what he hears Saul say, and then acting with courage and nobility is consistent in the texts about him.

Some time later, the Jerusalem Council sends Barnabas to Antioch, Syria, to investigate something new: believing Jews and Greeks (Gentiles) worship Jesus together! Believing Jews had been scattered as a result of persecution, with some settling in their new exiled homes (Acts 11:19–30). These scattered believers evidently talked to their neighbors, many of them Greeks, telling them news of the risen Lord Jesus (11:20). Luke writes that “the hand of the Lord was with them, and a great number became believers and turned to the Lord” (11:21).

Luke portrays Barnabas’s mission as fact-finding rather than as hostile. When Barnabas arrives in Antioch, he displays the same characteristics he exhibited in earlier stories: he acts openly, listens and makes ethical decisions. The text says that when he “saw the grace of God, he rejoiced” (Acts 11:23). Typical of a man of honorable character, Barnabas’s mind looks at the facts: these people—some of them uncircumcised Gentiles!—really are new converts! Barnabas sees that they, like himself and other Jewish converts, believed in this radical new faith; he sees this as evidence of the work and grace of God. He tells the Antioch believers “to remain faithful to the Lord with steadfast devotion” (11:23).

Barnabas pastors the church but its demands are too many for one. So he seeks out Saul—yet again—and journeys to Tarsus to find him (Acts 11:25–26). Barnabas’s action shows his humility and discernment. The text indicates that Barnabas’s overriding concerns were the needs of the people and the furtherance of the gospel. Yet he must have realized that Saul’s skill in debate and Saul’s incredible mind might overshadow his own qualities. Luke, however, gives no indication of jealousy on Barnabas’s part, only an indication of his desire to promote the name of the Lord Jesus.

Barnabas offers the younger man a job: co-pastoring the dynamic Antioch believers. Saul accepts. The young church grows even more under their joint leadership (Acts 11:26). It must have been a glorious and fruitful time for both congregation and teachers. Most likely, this time shaped much of Saul/Paul’s theology.

When the Antioch church fasts and prays, the Holy Spirit tells the church to “set apart for me Barnabas and Saul for the work to which I have called them” (Acts 13:2). This becomes what scholars term Paul’s first missionary journey. Saul’s name is changed to Paul on Cyprus midway through the journey’s account (13:9); probably the name change reflects the emphasis of his life from here on: his outreach to the Roman world. John Mark, Barnabas’s kinsman, accompanies them as their helper but leaves them in Perga and returns to Jerusalem (13:13–14:20). Paul and Barnabas continue preaching in Pisidian Antioch, Iconium, Lystra and Derbe. During an exciting journey that includes bold preaching and miraculous signs and wonders (14:3), the two establish churches and leave behind a recognized system of elders for governing (14:23).

Read about Paul’s First Missionary Journey through Perga and Pisidian Antioch and explore the route with a web-exclusive slideshow in Bible History Daily. 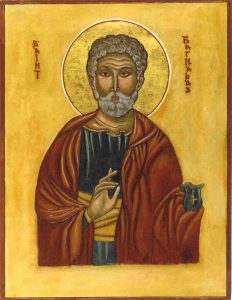 A bit later, Paul approaches Barnabas about going back to visit the places where they had preached before (Acts 15:36). Barnabas, the “people person,” advocates giving John Mark another chance. Paul, however, recalls John Mark’s earlier desertion (13:13) and decides he cannot continue working with them. What Luke describes as a “sharp disagreement” erupts; Barnabas and John Mark sail for Cyprus, and Paul travels with Silas and for Syria and Cilicia (15:37–41).

This story in Acts illustrates that conflict between believers—even apostles—can happen. However, the text omits two factors many find crucial in avoiding or minimizing conflict. First, prayer: there is no evidence that Barnabas and Paul prayed—and Acts abounds with prayer examples (see 1:14; 2:42; 6:4; 9:11). Second, a mediator or peacemaker is absent. It appears Barnabas and Paul decided to argue first and talk later—something typical of people throughout the ages. Thereafter in Acts, Paul becomes the predominant character.

Luke, however, earlier gave a surprising editorial comment about Barnabas, a man we can assume was his friend. Luke (Acts 11:24) writes that Barnabas “was a good man, full of the Holy Spirit and faith.” Luke also describes Joseph of Arimathea as good (Luke 23:50) and writes favorably about Tabitha/Dorcas, calling her a woman who was always doing good and helping the poor; among her good deeds was making robes and clothing for widows (Acts 9:36, 39).

Luke gave his editorial statement summing up Barnabas at Antioch, Syria. It was there, he writes, that the disciples were called Christians for the first time (Acts 11:26). Perhaps the character traits of Barnabas—his goodness, faith, big heartedness, courage, generosity, humbleness, self-sacrifice, open-mindedness, boldness and the fact the he was full of the Holy Spirit—were also stamped on other believers. If so, Luke’s praise marking this early church leader also applies to the early church.

Click here to read part one of “Barnabas: An Encouraging Early Church Leader.”