Luke reveals the prophetess as a Biblical model for aging 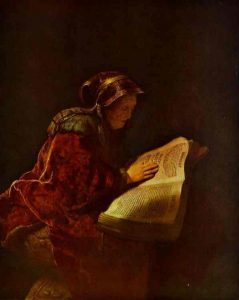 St. Anna the Prophetess by Rembrandt Van Rijn. Luke’s depiction of Anna in the Bible paints her as a pious prophetess whose advanced age and honorable behavior usher in the new covenant.

Anna is one of the Bible’s most unusual women. Introduced at the end of the Birth Narrative (Luke 1:1-2:40), Anna concludes the sextet of named, pious Israelites surrounding the miraculous births of John and Jesus. The others are Zechariah, Elizabeth, Mary, Joseph and Simeon. Anna arrives at the purification of Mary, Joseph and Jesus in the Temple, 40 days after Jesus’ birth (Luke 2:22-38). It is a scene repeated over and over in Israelite culture, for the law required a sacrifice of a lamb or two pigeons or two doves after a son’s birth (Leviticus 12:2-8).

However, this purification is unlike any other, for Simeon and Anna arrive at the ritual independently, though both seem led by divine direction (Luke 2:22-38).

Luke’s pairing of Simeon and Anna provides an interesting comparison. Simeon arrives first, and Luke records more of his encounter. Simeon is an old man. He exclaims, “Now, Sovereign Lord, you can let your servant depart in peace” (v. 29). He prophesies that the child in his arms is God’s salvation, “prepared in the sight of all people, a light for revelation to the Gentiles and for glory to your people Israel” (Luke 2:28, 30b-32). Notice Luke’s deft writing: Simeon praises the Lord while Anna offers thanks; he prophesies, but she is called a prophetess (Luke 2:29-32, 34-36).

Regarding Anna, Luke provides three terse verses that manage to vividly depict her as a woman deserving the honor bestowed on the elderly in the ancient Mediterranean world (v. 36-38). The appositive prophetess heads her description (Luke 2:36). In this she outranks Simeon, a man praised as righteous and devout (Luke 2:25) who may be a priest because he holds the baby Jesus. Anna is the New Testament’s only named female prophetess. Luke gives her father’s name, Phanuel, but not her husband’s. He mentions her tribe, Asher. As such, she numbers among the few New Testament characters with tribal listings. Others include Jesus, of the house and lineage of David and the tribe of Judah (Luke 2:4; Matthew 1:1-16), Saul of Benjamin (Philippians 3:5) and Barnabas, a Levite (Acts 4:36).

Luke summarizes Anna’s encounter with the little family. Unlike Simeon, her direct speech is narrated—yet it is powerful. While Simeon speaks of the larger and later context of the child to the Gentiles and Israel (vv. 30-32), Anna evangelizes immediately and selectively—to those “looking forward to the redemption of Jerusalem” (v. 38). She and Simeon join others in Luke’s gospel in recognizing this child’s great significance and wide import: the angel Gabriel (1:31-33), Elizabeth and John (in uterus) (1:42-45), Zechariah (1:76-79) and the Bethlehem shepherds who also evangelize (2:11-12, 20).

As a prophetess, Anna receives insight into things that normally remain hidden to ordinary people; she recognizes who this child is and tells of his significance to selected people in Jerusalem. Her actions affirm Amos 3:7: “Surely the Sovereign Lord does nothing without revealing his plans to his servants the prophets.”

Luke dwells on Anna’s advanced age with ambiguity. Let’s simply agree with the text: she is ancient! Luke tells us she was married for seven years, then widowed. Her widowhood has either lasted 84 years or she is 84 years old when she crosses the Biblical stage (vv. 36-37). If the former, she could well be 105 years old, the same age as the apocryphal figure Judith when she died (Judith 16:28). Some scholars figure it this way: Anna married at age 14, evidently a common age, was widowed at age 21, and then meets the young family 84 years later at age 105.

I tend to see her as 105 because it is in line with the numerous miracles and unusual occurrences already surrounding the Birth Narrative, including the advanced age of Zechariah and Elizabeth when John was conceived (Luke 1:7, 13, 18, 57), and the Holy Spirit’s action of overshadowing Mary, who was able to conceive without intercourse (Luke 1:31-35). My point is this: age 105 is not out of line with Luke’s narrative replete so far with angelic visitations and miracles—especially when Luke fills in with more details about Anna. In Deuteronomy, Moses prophesies that for the tribe of Asher, Anna’s tribe, “your strength will equal your days” (Deuteronomy 33:25). Surely Anna’s life shows evidence of that.

Luke’s description of her lifestyle may be seen as eccentric today, and quite likely was considered so at the time. She never leaves the Temple (v. 37). She worships night and day, fasting and praying. She is a workaholic, available 24/7. Yet her lifestyle evidently invigorates her, for she is mobile, articulate, alert, spiritually savvy and unselfish.

Luke indicates that her habits of worship, prayer and fasting represent a routine, probably one of decades. Evidently she resides within the Temple or on its premises. A precedent in earlier centuries could have been the presence of Levite musicians and heads of families “who stayed in the rooms of the temple and were exempt from other duties because they were responsible for the work day and night” (1 Chronicles 9:33). So perhaps this behavior was not so unusual during the first century because of the full time work of worship the Levites undertook.

Anna, this worship workaholic, sets her own hours, schedule, route and routine. Arguably she listens to God and prays as directed. Others recognize her as a prophetess. The work of prayer indeed characterizes a prophet, for God told Abimelech that Abraham was “a prophet and he will pray for you” (Gen. 20:7). Anna knows fasting brings results. Biblical precedents include Esther’s three-day fast before courageously approaching Xerxes (Est. 4:15-16), and the abstinence of Daniel and his three friends regarding the delicacies of King Nebuchadnezzar’s table (Dan. 1:12).

Let’s consider Luke’s textual silences. Luke omits mention of her family; perhaps she had outlived her children. But if she has living family members, what do they think of her lifestyle? Do they share her devotion to constant worship? What about her finances? Is she independently wealthy, or do others provide her food? What did she look like? These questions remain unanswered, for they do not contribute toward Luke’s themes.

The Biblical text, however, contains clues regarding her appearance and character. Her lifestyle of fasting may indicate thinness; her ability to walk around the Temple indicates her fitness and that her eyesight and hearing are intact; her designation as a prophetess indicates her spiritual acuity; her talk of the child to those interested in the redemption of Jerusalem indicates her deep connection with a likeminded community.

With this in mind, Anna shows one model of aging in the Biblical text. Luke presents her positively, as a woman without the bitterness that may come with age and as one full of hope. As she moves throughout the Temple, no doubt she seeks to do good to those whom she encounters. Luke’s description shows her as well adjusted, engaged in Israel’s life and useful to the Lord. She may well have become the model for the righteous church widows Paul describes in 1 Timothy 5:5. Arguably the best representatives of the Old Covenant—Zechariah, Elizabeth, Simeon, and worship workaholic Anna—although all elderly, all ably serve as transitions to the New Covenant.

Robin Gallaher Branch is Extraordinary Associate Professor in the Faculty of Theology at North-West University in Potchefstroom, South Africa. She received her Ph.D. in Hebrew Studies from the University of Texas in Austin in 2000. She was awarded a Fulbright Fellowship for the 2002–2003 academic year to the Faculty of Theology at North-West University. Her most recent book is Jereboam’s Wife: The Enduring Contributions of the Old Testament’s Least-Known Women (Hendrickson, 2009).

Widows in the Bible In a Biblical Views column, Robin Gallaher Branch presents several examples of how, in the Bible, widows can serve as special textual markers to alert readers that something significant is about to happen.

Arias, Mortimer. 1984. “Simeon and Anna Sodalities: A Challenge to Churches in Transition.” Missiology: An International Review 12(1):97-101.

Fee, Gordon D., & Douglas Stuart. 2003. How to Read the Bible for All Its Worth. Grand Rapids: Zondervan.

Geldenhuys, Norval. 1979. Commentary on The Gospel of Luke: The English Text with Introduction, Exposition, and Notes. Wm. B. Eerdmans Publishing Company.

Marshall, I. Howard 1978. The Gospel of Luke: A Commentary on the Greek Text. Exeter: The Paternoster Press.

This Bible History Daily feature was originally published on April 19, 2013.