How the divide between B.C. and A.D. was calculated 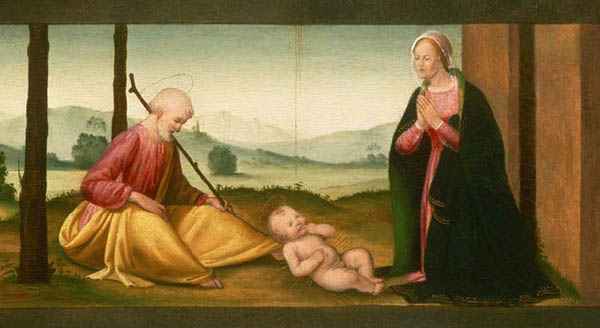 When was Jesus born? This predella panel from an altarpiece by Mariotto Albertinelli (1474–1515) depicts the newborn baby Jesus flanked by Joseph and Mary. In which year was Jesus born—B.C. or A.D.? The evidence suggests he was born in 4 B.C. or before. Photo: John G. Johnson Collection, 1917, courtesy of the Philadelphia Museum of Art.

In which year was Jesus born?

While this is sometimes debated, the majority of New Testament scholars place Jesus’ birth in 4 B.C. or before. This is because most date the death of King Herod the Great to 4 B.C. Since Herod played a major role in the narrative of Jesus’ birth (see Matthew 2), Jesus would have had to be born before Herod died.

This begs the question: How could Jesus have been born in B.C.—“before Christ”?

The terms B.C. and A.D. stand for “before Christ” and “anno Domini,” which means “in the year of the Lord.” These terms are used to mark years in the Gregorian and Julian calendars—with the birth of Jesus as the event that divides history. In theory, all the years before Jesus’ birth receive the label B.C., and all those after his birth get A.D. If Jesus had been born in 1 A.D., these designations would be completely accurate.

However, as mentioned above, it seems most likely that Jesus was born in 4 B.C. or earlier. How then did the current division between B.C. and A.D. come to be?

Ben Witherington III of Asbury Theological Seminary examines the calendar division in his Biblical Views column “The Turn of the Christian Era: The Tale of Dionysius Exiguus,” published in the November/December 2017 issue of Biblical Archaeology Review. He identifies the monk Dionysius Exiguus, who lived during the fifth and sixth centuries A.D., as the originator of the B.C. and A.D. calendar (based on when he calculated Jesus was born):

Dionysius was born in Scythia Minor, which means somewhere in Romania or Bulgaria, and he lived from about 470 to 544 A.D. He was a learned monk who moved to Rome and became well known for translating many ecclesiastical canons from Greek into Latin, including the famous decrees from the Councils of Nicaea and Chalcedon. Ironically, he also wrote a treatise on elementary mathematics. I say ironically because what he is most famous for is the “Anno Domini” calculations that were used to number the years of both the Gregorian and the adjusted Julian calendars.

Although we are not exactly sure how he came to this conclusion, Dionysius dated the consulship of Probius Junior, who was the Roman Consul at the time, to “525 years after ‘the incarnation of our Lord Jesus Christ’”—meaning 525 years after Jesus’ birth, that is, 525 A.D. Because of Dionysius’s calculations, a new calendar using B.C. and A.D. was born. The terms B.C.E (Before the Common Era) and C.E. (Common Era) also use this calendar.

Even though Dionysius Exiguus calculated his date for the year in which Jesus was born in the sixth century, it was not until the eighth century that it became widespread. This was thanks to the Venerable Bede of Durham, England, who used Dionysius’s date in his work Ecclesiastical History of the English People.

Learn more about when Jesus was born and Dionysius Exiguus’s calculations for B.C. and A.D. in Ben Witherington III’s Biblical Views column “The Turn of the Christian Era: The Tale of Dionysius Exiguus” in the November/December 2017 issue of Biblical Archaeology Review.

——————
Subscribers: Read the full Biblical Views column “The Turn of the Christian Era: The Tale of Dionysius Exiguus” by Ben Witherington III in the November/December 2017 issue of Biblical Archaeology Review.

Did Jesus Exist? Searching for Evidence Beyond the Bible: Lawrence Mykytiuk’s feature article from the January/February 2015 issue of BAR with voluminous endnotes

This Bible History Daily feature was originally published on November 29, 2017.