Can anyone answer the question "What did Jesus look like?" 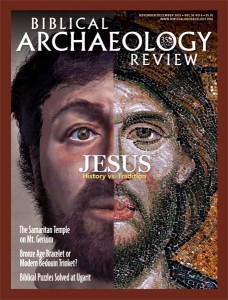 Novelists, script writers and casting directors have piqued our interest. Jesus may be one of the best known and most talked-about people of ancient history. But what did Jesus look like? In the Biblical Archaeology Review article “Painting a Portrait of Jesus” (republished below), D. Moody Smith examined the difficulties in answering this question.

Many ancient accounts of a person’s life give us a hint of the person’s physical appearance. For example, the Old Testament tells us that King David was ruddy and handsome. But the New Testament never goes near the question “What did Jesus look like?”

Actually, as Smith pointed out in his article below, we don’t know much about the personal life of Jesus either. We’re given some insight into his family: the Gospels name his mother and brothers—including James, who became a leader of the first-century church in Jerusalem—and mention unnamed sisters. John 1:45 refers to Jesus as “son of Joseph,” though after the Nativity narratives Joseph isn’t mentioned as a player.

Some of Jesus’ followers were women, including Mary Magdalene. The Gospel of John implies a close relationship, including her role in the resurrection story. Was Mary Magdalene the wife of Jesus, as envisioned by Nikos Kazantzakis in The Last Temptation of Christ and Dan Brown in The Da Vinci Code? Most Jewish men would have been married, but it seems not likely for Jesus’ contemporary John the Baptist. And the apostle Paul writes that he was single. So Jesus being single and celibate was very possible.

In the Roman catacombs we see our first representations of Jesus. But could they, in Rome, know the answer to the question “What did Jesus really look like?” There he was depicted as a beardless shepherd. By the fourth century, Jesus is shown with a beard, as we often see him represented today.

Since ancient times, gaps in Jesus’ story have prompted writers to imagine stories. The Infancy Gospel of Thomas tells of a child Jesus creating birds from clay. The Gospel of Judas gives a positive take on Jesus’ relationship to Judas Iscariot. D. Moody Smith asks below in “Painting a Portrait of Jesus”: Did any of these writers give us a clearer answer to the question “What did Jesus really look like?” Not really. That we’ll just have to imagine.

Painting a Portrait of Jesus

We are awash in Jesus fiction. It’s not surprising. Jesus is the best-known figure of history, but in many ways he is also the least known. This makes a great subject for the novelist.

Most ancient bioi (Greek plural of the word for “life”), like modern biographies, describe the subject’s appearance. Even Old Testament descriptions of King David, for example, allude to his physical attractiveness (1 Samuel 16:12; 17:42). But the New Testament Gospels contain no reference to Jesus’ appearance, much less a description of him. We don’t know what he looked like.

This strange omission conforms to the New Testament depiction of Jesus generally. We are told little of his personal life or relationships. The one exception is his family. His mother, brothers and sisters figure in the gospel story (Mark 6:1–6). His brother James, who had not been a follower, evidently claimed to have seen the risen Jesus (1 Corinthians 15:7). James then became a major leader in the earliest church (Galatians 1:18–19; 2:9). But Joseph does not appear during Jesus’ ministry, and Jesus is rarely called “son of Joseph” (John 1:45). From antiquity it has been inferred that Joseph had died before Jesus’ ministry began. That is quite possible, although we are not told in the New Testament itself. Joseph is simply absent.

Moreover, we learn nothing about Jesus’ relationship with women, other than that women were among his followers (Mark 15:40–41; Luke 8:1–3). Prominent among them was Mary Magdalene. In the Gospel of John she alone sees Jesus outside the tomb after he has risen from the dead (John 20:11–18). This touching scene presupposes a close relationship not otherwise revealed in the Gospels. Was their relationship intimate? Did Jesus beget progeny by her?

That he did is the thesis of the popular novel by Dan Brown, The Da Vinci Code. The ostensible facts about Jesus “revealed” in the course of the book’s narrative are actually fictitious. The view that Jesus was married to Mary Magdalene had already been suggested in Nikos Kazantzakis’s The Last Temptation of Christ.

Of course, any normal Jewish man would have been married. But was Jesus “normal,” or were the times normal? In fact, it is improbable, on strictly historical grounds, that Jesus was married. Jesus’ mentor was John the Baptist. The Baptist’s diet, dress and wilderness venue scarcely befitted a married man (Mark 1:4–6). Like the Jewish inhabitants of the Qumran (Dead Sea Scrolls) community, the Baptist lived in the wilderness practicing an ascetic life and awaiting God’s intervention in ordinary history.

Jesus’ apostle Paul of Tarsus, himself a Jew, was also single and counseled believers to remain as he was because the time of crisis was at hand (1 Corinthians 7:25–31). Jesus himself spoke of those who had become eunuchs (celibate) for the sake of the kingdom of heaven (Matthew 19:12), probably alluding to his own practice.

The earliest apparent representations of Jesus are in the Roman catacombs. The art is stereotypical as are other portraits of this period. In these portraits Jesus is portrayed beardless, as the Good Shepherd. By the fourth century, however, he has grown a beard and begins to look more familiar.

There are large lacunae, blank spaces in the Gospel descriptions of his life that are inviting to fiction writers, ancient as well as modern. The Infancy Gospel of Thomas (not the same as the Nag Hammadi gospel attributed to Thomas) tells the story of the five-year-old Jesus making 12 birds from the clay in a stream, presumably unaware that it was the Sabbath. Joseph rebukes the child, whereupon Jesus claps his hands and the birds fly away. The so-called Gospel of Peter depicts in fantastic and obviously mythic terms the emergence of the risen Jesus from the tomb. The recently published Gospel of Judas supplies a story of Jesus’ positive relation to Judas Iscariot that accounts for his betrayal as, in effect, an act of obedience to Jesus. Recent books and films continue to fill these gaps.

——————
Based on “Painting a Portrait of Jesus” by D. Moody Smith from the March/April 2007 issue of Biblical Archaeology Review. The article was first republished in Bible History Daily in December 2011.