Many people still assume that Jesus’ Last Supper was a Seder, a ritual meal held in celebration of the Jewish holiday of Passover. In this exclusive guest post, Boston University Professor of Religion Jonathan Klawans provides an update to his popular Bible Review article questioning this common assumption. This post was originally published in Bible History Daily in 2016.—Ed.

Every spring, as the Boston snow begins to melt, the emails start coming in. Some are positive, others negative—but all exhibit continued curiosity and excitement about the Passover Seder meal and its relationship to Jesus’ Last Supper. And if they are writing to me about this, it’s because of the piece I wrote in Bible Review back in 2001.

And it’s a question I do revisit myself annually: part of the way I prepare myself for Passover each year is to read a few new articles that have appeared—and of course I read those emails too (though I don’t answer the nasty ones!). 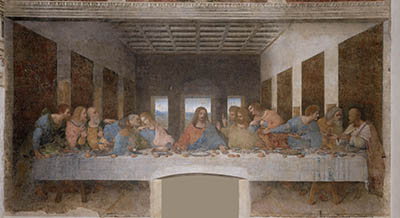 Was Jesus’ Last Supper a Passover Seder meal? Here, we see Leonardo Da Vinci’s famous painting The Last Supper, which was completed around 1498.

No, there will be no exciting turnarounds in this posting. Yes, readers have asked some good questions. And some scholars have offered vigorous defenses of the Last Supper/Seder connection. Nevertheless, I remain convinced that the Last Supper was not a Passover Seder meal.

First, very little, if anything, of the rabbinic Seder practices can be read back to the early part of the first century C.E. Second, Jesus’ Last Supper with his disciples did not take place on the first night of Passover. There is a real difference between John and the synoptics on this question, and John’s chronology continues to make much more sense to me: Jesus was tried and killed before the holiday began. By Seder time, he was buried.

Perhaps one of these years I’ll revise the piece from beginning to end. But in lieu of that, below are some bibliographic updates and a few additional points to ponder.

To my mind, the most important development in the last fifteen years has been the appearance of a number of resources to help readers of English understand better the history of the Passover Haggadah (the book that lays out the rituals practiced and passages recited over the course of a traditional Passover Seder meal):

• Joshua Kulp, “The Origins of the Seder and the Haggadah,” Currents in Biblical Research 4.1 (2005), pp. 109–134. This bibliographic essay provides helpful definitions of the key Hebrew terms (including Seder and Haggadah) and provides a sound history of scholarship, summarizing some of the key debates. [Disclaimer: I was the soliciting editor of this article during my ten-year stint as an editor for CBR.]

• Joshua Kulp and David Golinkin, The Schechter Haggadah: Art, History and Commentary (Jerusalem: The Schechter Institute of Jewish Studies, 2009). This beautifully illustrated volume includes a full Haggadah and a lengthy discussion of all the academic issues surrounding the history of the Haggadah and the celebration of the Passover Seder. [I had nothing to do with this one!]

• Shmuel Safrai and Ze’ev Safrai, Haggadah of the Sages (Jerusalem: Carta, 2007). This is the English edition of a modern Hebrew academic commentary on the Passover Seder (the 1998 fuller Hebrew edition is cited in my article in n. 11).

• Joseph Tabory, The JPS Commentary on the Haggadah: Historical Introduction, Translation, and Commentary (Philadelphia: The Jewish Publication Society, 2008). This too is a modern academic edition of the Haggadah with an English introduction and running commentary.

Readers who delve into these sources will find a great deal of information about all aspects of Passover and the Seder. Regarding our topic, most of what you will find in these sources will be in agreement with the approach that separates the Last Supper from the Passover Seder. This is because it remains the case that scholars of early rabbinic literature (and not just the most skeptical of them) have come to a general consensus that the rabbinic Seder ritual was developed after 70 C.E. (and therefore almost two generations after Jesus’ death in the early 30s C.E.). If the Seder didn’t really exist until after 70 C.E., it could not have been practiced whenever Jesus had his Last Supper, Passover or not.

Passover is the celebration of the Israelite exodus from Egypt. For more on the Exodus, check out the Bible History Daily Exodus page for dozens of free articles and video lectures on the flight of the Israelites from slavery in Egypt and their miraculous escape across the Red Sea.

For readers who want to consider an academic counter-argument, the most forceful one I know is by Joel Marcus of Duke University Divinity School: “Passover and Last Supper Revisited,” New Testament Studies 59.3 (2013), pp. 303–324. In this article Marcus does everything he can to take various parallels between Jewish and Christian traditions and turn them in favor of the argument that Jesus’ Last Supper was a Passover Seder meal. For instance, he calls attention to the so-called “ha lachma” (Aramaic for “This is the bread”), a brief passage traditionally recited at the opening of the Seder: “This is the bread of affliction that our ancestors ate in Egypt…” This statement does indeed parallel the Eucharistic words, grammatically (“This bread is…”). Is it possible that the ha lachma tradition (which can only be traced back to medieval manuscripts) is in fact an ancient tradition that sheds light on the Eucharistic words of Jesus? Yes—anything is possible. But it is much more likely, in my view, that a medieval Jewish tradition that parallels a Christian tradition is responding to Christianity.

This is what we need to remember: Judaism and Christianity continued to influence each other, long after the death of Jesus. Passover and Easter continued to influence each other too. The dialogue—and competition—between these holidays left imprints on the respective rituals, as well as on the traditional sources (such as the Gospels and the Haggadah) describing these practices. The “Passoverization” of Christian rituals and texts—as discussed in my BR article—continued long after Jesus’ death

But we can’t only think about influence—we must also remember difference. Joseph Tabory (for instance, to consider one of the writers listed above) says little about the Last Supper per se in his edition of the Haggadah. Nevertheless, he does point out one key difference: While the Last Supper traditions focus on the meaning of the wine (alongside the bread), the Passover traditions feature wine without offering any explanation for it even while other symbols are explained carefully (Tabory, JPS Commentary, pp. 13–14). This is a telling difference indeed!

When we find similarities, we must consider the possibility that influence has moved in either direction, even in periods long after Jesus’ death. When we find differences, we must remember that not everything in these two traditions necessarily has much to do with the other.

If we cannot figure out precisely how Christians and Jews may have influenced each other with regard to Passover and the Last Supper, it becomes all the more difficult to figure out what the earliest practices of each may have been. All this in turn limits our ability to know what Jesus would have done on Passover night (had he lived another day). And the likelihood that Jesus died before that partially-prepared-for Passover had begun also renders it most unlikely that his Last Supper was even a celebration of Passover, let alone a Seder.

But why should historical skepticism ruin anyone’s holiday? Happy Easter and Chag Sameach (Hebrew for “Happy Holiday”) to any and all who celebrate!

Ancient Jewish Theology and Law
Jonathan Klawans on the divergence of the Pharisees, Sadducees and Essenes