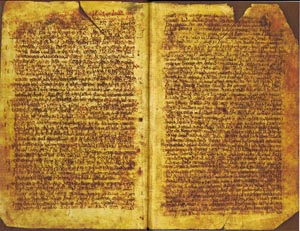 A lost Syriac manuscript, the Revelation of the Magi, translated into English by Bible scholar Brent Landau, may help answer that key question from the Christmas story: “Who were the magi?” Photo: Ms Vaticanus Syriacus 163, © 2011 Biblioteca Apostolica Vaticana.

Who were the magi, those gift-bearing wise men from the east who are so central to the traditional telling of the Christmas story? Bible scholar Brent Landau believes he has found at least one answer to this age-old question.

The Bible tells us very little about the magi. Their story appears but once, in the Gospel of Matthew (2:1–12), where they are described as mysterious visitors “from the east” who come to Jerusalem looking for the child whose star they observed “at its rising.” After meeting with King Herod, who feigns an intention to worship the child but actually plans to destroy him, the magi follow the same star to Bethlehem. There, upon seeing the baby Jesus and his mother Mary, the magi kneel down and worship him, presenting him with their three famous gifts—gold, frankincense and myrrh. Then, without reporting to Herod, they depart for their homeland, never to be heard from again.

For early Christians, the seemingly pivotal yet unexplained background of the mysterious magi provided abundant room to shape new narratives around the question “Who were the magi?” One of the most compelling, recently translated into English by Bible scholar Brent Landau, is the so-called Revelation of the Magi, an apocryphal account of the traditional Christmas story that purports to have been written by the magi themselves.

The account is preserved in an eighth-century C.E. Syriac manuscript held in the Vatican Library, although Brent Landau believes the earliest versions of the text may have been written as early as the mid-second century, less than a hundred years after Matthew’s gospel was composed. Written in the first person, the Revelation of the Magi narrates the mystical origins of the magi, their miraculous encounter with the luminous star and their equally miraculous journey to Bethlehem to worship the child. The magi then return home and preach the Christian faith to their brethren, ultimately being baptized by the apostle Thomas. The earliest known depiction of the magi is this mid-third-century C.E. fresco decorating the Catacomb of Priscilla, one of Rome’s oldest Christian cemeteries. Photo: Scala/Art Resource.

According to Brent Landau, this dramatic account not only answers the question “Who were the magi?” but also provides details about how many they were, where they came from and their mysterious encounter with the star that led them to Bethlehem. In the Revelation of the Magi, there are not just three magi, as often depicted in early Christian art (actually, Matthew does not tell us how many there were), nor are they Babylonian astrologers or Persian Zoroastrians, as other early traditions held. Rather from Brent Landau’s translation it is clear the magi (defined in this text as those who “pray in silence”) are a group—numbering as few as 12 and as many as several score—of monk-like mystics from a far-off, mythical land called Shir, possibly China. They are descendants of Seth, the righteous third son of Adam, and the guardians of an age-old prophecy that a star of indescribable brightness would someday appear “heralding the birth of God in human form.”

When the long-prophesied star finally appears, the star is not simply sighted at its rising, as described in Matthew, but rather descends to earth, ultimately transforming into a luminous “star-child” that instructs the magi to travel to Bethlehem to witness its birth in human form. The star then guides the magi along their journey, miraculously clearing their path of all obstacles and providing them with unlimited stamina and provisions. Finally, inside a cave on the outskirts of Bethlehem, the star reappears to the magi as a luminous human child—the Christ child—and commissions them to become witnesses to Christ in the lands of the east.

It’s a fascinating story, but does it actually bring us any closer to understanding who the actual magi of the Christmas story might have been? Unfortunately, the answer is no, says Landau, although it may provide insight into the beliefs of an otherwise unknown Christian sect of the second century that identified with the mysterious magi.

“Sadly, I don’t think this is actually written by the historical wise men,” said Landau in an interview with National Public Radio’s Diane Rehm. “In terms of who wrote it, we have no idea. [But] the description of the magi and [their religious practices] is so remarkably detailed and I’ve often wondered whether it’s reflecting some actual community out there that practiced and kind of envisioned themselves in the role of the magi.”

This Bible History Daily feature was originally published on November 29, 2011.

More on the Magi in Bible History Daily:

Witnessing the Divine: The Magi in Art and Literature by Robin M. Jensen 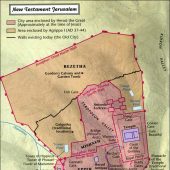 The Last Days of Jesus: A Final “Messianic” Meal