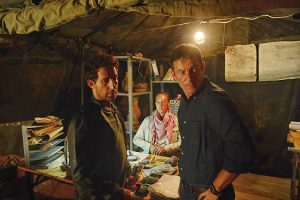 In the TV series Dig on the USA Network, FBI agent Peter Connelly investigates the death of a young archaeologist who was wrapped up in a centuries-old conspiracy involving the Essenes and the Jerusalem Temple. The archaeology TV show concludes its first season on May 7, 2015.

In Jerusalem, FBI agent Peter Connelly turns a routine encounter with a young archaeologist, who resembles his deceased daughter, into a whirlwind adventure to prevent World War III when she is found murdered. Across the world in New Mexico in a cult-like compound, a young boy named Jacob is coming of age. Jacob, however, is not what he appears, and he has a destiny directed by prophecy. On an isolated farm in Norway, a red heifer without blemish is born. This is how the first season of the TV series Dig, a new show on the USA Network, began.

In an archaeology TV show where Indiana Jones meets Lost meets CSI, Dig brings Biblical archaeology to prime-time television. The show intricately weaves three seemingly unrelated storylines together to create a conspiracy born out of the Dead Sea Scrolls and the Essenes to resurrect the Temple in Jerusalem. The archaeology belongs to a bygone era, and it is hard to ignore the resemblance between dig director Ian Margrove and Leonard Woolley (in appearance if nothing else). The archaeology TV show is to Biblical archaeology what Dan Brown’s Da Vinci Code is to church history. Some of the names, places, dates and even methods are correct, but the writers and producers do not let themselves get bogged down by facts and accuracy. They are telling a story, and it is pure fiction. An enjoyable, if convoluted, mystery, but not the place to go looking for a documentary.

The first season of the TV series Dig concludes on May 7, 2015, and is available on demand through your local cable provider.