Check out the archaeological finds that thrilled us this past year 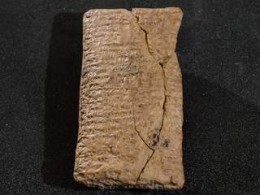 The so-called Ark Tablet, an Old Babylonian (1900-1700 B.C.E.) account of the flood, was translated by British Museum scholar Irving Finkel.

From the translation of a Babylonian “Ark Tablet” to the resurfacing of a skeleton from Ur in a museum basement, 2014 was a year full of exciting Biblical archaeology discoveries and new interpretations. As we ring in the New Year, let’s take a look back at the top 10 finds that thrilled us in 2014.

The Animals Went in Two by Two, According to Babylonian Ark Tablet
An Old Babylonian flood tablet translated by British Museum scholar Irving Finkel describes how to build a circular ark.

Canaanite Fortress Discovered in the City of David
An enormous 18th-century B.C.E. structure that isolates and protects the Gihon Spring is believed to be the fortress described in the Book of Samuel that King David later conquered.

Huqoq 2014: Update from the Field
Huqoq excavation director Jodi Magness and mosaics specialist Karen Britt discuss a new mosaic that might depict the legendary meeting between Alexander the Great and the Jewish high priest.

Oldest Metal Object from the Southern Levant Discovered
The discovery of a 7,000-year-old copper awl at Tel Tsaf suggests that metal was used in the southern Levant several hundred years earlier than previously thought.

Early Bronze Age: Megiddo’s Great Temple and the Birth of Urban Culture in the Levant
Megiddo’s Great Temple is a structure that, according to its excavators, “has proven to be the most monumental single edifice so far uncovered in the EB I Levant and ranks among the largest structures of its time in the Near East.”

Skilled Craftsmen, Not Slaves, Smelted Copper at Timna
Scholars suggest that ancient metalworkers in the Timna Valley were not slaves, as popularly believed, but highly skilled craftsmen.

6,500-Year-Old Ur Skeleton Resurfaces in Penn Museum
A skeleton unearthed from an Ubaid-period (5500–4000 B.C.E.) grave at Ur was recently rediscovered in the basement of the University of Pennsylvania Museum of Archaeology and Anthropology.

Encore! Take a look at more stories that made a splash in 2014:

The Philistines in Jordan