Tel Habuwa excavations reveal the conquest of Tjaru by Ahmose I

“After the conclusion of the treaty they left with their families and chattels, not fewer than two hundred and forty thousand people, and crossed the desert into Syria. Fearing the Assyrians, who dominated over Asia at that time, they built a city in the country which we now call Judea. It was large enough to contain this great number of men and was called Jerusalem.”
–Josephus, Against Apion 1.73.7, quoting Manetho’s Aegyptiaca 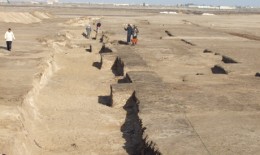 Excavations at Tel Habuwa, thought to be ancient Tjaru, reveal evidence of the expulsion of the Hyksos by Ahmose I at the end of the Second Intermediate Period.

In the Second Intermediate Period (18th–16th centuries B.C.E.), towards the end of the Middle Bronze Age, the West Asian (Canaanite) Hyksos controlled Lower (Northern) Egypt. In the 16th century, Ahmose I overthrew the Hyksos and initiated the XVIII dynasty and the New Kingdom of Egypt.

Recent archaeological discoveries at Tel Habuwa (also known as Tell el-Habua or Tell-Huba), a site associated with ancient Tjaru (Tharo), shed new light on Ahmose’s campaign. A daybook entry in the famous Rhind Mathematical Papyrus notes that Ahmose seized control of Tjaru before laying siege the Hyksos at their capital in Avaris.

Excavations at the site, located two miles east of the Suez Canal, have uncovered evidence of battle wounds on skeletons discovered in two-story administrative structures dating to the Hyksos and New Kingdom occupations. The site showed evidence of burned buildings, as well as massive New Kingdom grain silos that would have been able to feed a large number of Egyptian troops. After Ahmose took the city and defeated the Hyksos, he expanded the town and built several nearby forts to protect Egypt’s eastern border. Tjaru was first discovered in 2003, but until now, the excavation only uncovered the New Kingdom military fort and silos. This new discovery confirms a decisive moment in the expulsion of the Hyksos previously known from textual sources.

Josephus identifies the Israelite Exodus with the expulsion of the Hyksos “shepherd kings.” Read more about archaeological evidence for the Israelites in Egypt and new scholarship on the Exodus in our FREE eBook Ancient Israel in Egypt and the Exodus.

Tomb painting from Beni Hasan, Egypt. A figure named Abisha and identified by the title Hyksos leads brightly garbed Semitic clansmen into Egypt to conduct trade. Dating to about 1890 B.C.E., the painting is preserved on the wall of a tomb carved into cliffs overlooking the Nile at Beni Hasan, about halfway between Cairo and Luxor. In the early second millennium B.C.E., numerous Asiatics infiltrated Egypt, some of whom eventually gained control over Lower Egypt for about a century and a half. The governing class of these people became known as the Hyksos, which means “Rulers of Foreign Lands.”

The Hyksos are well known from ancient texts, and their expulsion was recorded in later ancient Egyptian historical narratives. The third-century B.C.E. Egyptian historian Manetho–whose semi-accurate histories stand out as valuable resources for cataloging Egyptian kingship–wrote of the Hyksos’ violent entry into Egypt from the north, and the founding of their monumental capital at Avaris, a city associated with the famous excavations at Tell ed-Dab’a. After the Hyksos were expelled from Egypt, Manetho reports that they wandered the desert before establishing the city of Jerusalem.

Learn more about the fortress excavated at Tel Habuwa—the largest discovered to date in Egypt.

The expulsion of the Hyksos may not have been a single event, and many still read Manetho’s texts on the Hyksos expulsion as a record of the Israelites’ Exodus. After the Hyksos were defeated by Ahmose, some Hyksos people likely remained in Egypt, perhaps as a subjugated class. The Egyptian Queen Hatshepsut (1489–1469 B.C.E.) recorded the banishment of a group of Asiatics from Avaris, the former Hyksos capital. While this second expulsion would still have been centuries before the traditional date of the Exodus, there may exist parallels between these events and the Exodus narrative, or the earlier Biblical accounts of Abraham, Sarah and Lot’s own expulsion from Egypt in Genesis 12:19.

Read more about the discoveries at Tel Habuwa.

Look on My Works: The many faces of Ramesses the Great

An Ancient Israelite House in Egypt?