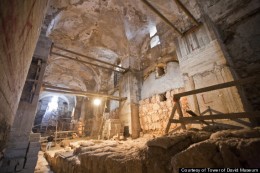 The Dark Side of Pilate,

The Geography of Faith: Tracing the Via Dolorosa,