August 2017: An Eclipse of Biblical Proportions

In the summer of 2017, those in North America were treated to an eclipse of Biblical proportions. A total solar eclipse (when the moon completely blocks the sun, casting the earth in temporary darkness) was visible across the United States on August 21, 2017 (see map for visibility). When solar eclipses work their eerie wonders, shadows will behave strangely. Pin-hole openings in tree leaf cover will project tiny eclipses on the ground. Some people will see shadow waves—bands of shade moving across the ground.

Viewers in the path of the August 2017 eclipse experienced about 2 minutes of total darkness. At the spot marked GD—Greatest Duration—the eclipse lasted 2 minutes and 40.2 seconds. The spot marked GE—Greatest Eclipse—indicates the location where the moon’s shadow passed closest to the earth’s center. 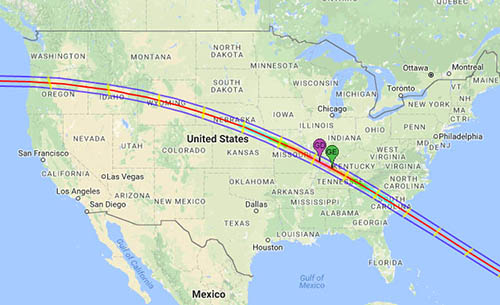 Might eclipses, together with the timing of Biblical events, have been interpreted as divine messages and signs?

King Hezekiah has gone down in history as one of Judah’s good kings, a reformer. At one point, he became deathly ill. The story of his illness and cure is told in 2 Kings 20:1–11 and Isaiah 38:1–7, and a brief mention of the event is found at 2 Chronicles 32:24. 2 Kings tells of a “boil,” which may suggest a type of cancer. Surely, Hezekiah’s physicians used all their knowledge and skill to save the king. Baths, dressings, dietary changes, internal medications—nothing was successful against the boil.

The Biblical account relates that Isaiah the prophet was sent to Hezekiah to inform him that he would die from his illness. Hezekiah prayed for healing, and Isaiah had not left the palace when he was sent back to the king with a different message: The Lord would heal him and give him another 15 years of life. A sign was to confirm the healing. The shadow could move forward or backward on an outdoor stairway. Hezekiah chose for the shadow to move backward (2 Kings 20:10).

On March 5 in 702 B.C.E., the 16th year before Hezekiah’s death, a prominent solar eclipse appeared over the Middle East (see NASA’s Five Millennium Catalog of Solar Eclipses). Its path crossed the Arabian Peninsula, and the obscuration of the sun over Israel was more than 60 percent.

If a stairway had been engulfed in darkness and then restored to daylight, the shadow would have appeared to retreat. A shadow wave, produced by an eclipse, may also have given the appearance of a shadow retreating. If you were in the path of the eclipse on August 21, 2017, you too might have seen this rare Biblical sign. It would be another hundred years before the Greeks would accomplish the first actual prediction of an eclipse.

Frederick Baltz is on the faculty of the Institute of Lutheran Theology.

A Comet Gives Birth to an Empire by Sarah K. Yeomans

This Bible History Daily feature was originally published on August 11, 2017.