A "Gospel of Jesus’ Wife" on a Coptic Papyrus

An Early Reference to Jesus’ Wife Christian tradition holds that Jesus was not married. While the New Testament never mentions Jesus’ wife, it never explicitly states that he is not married. On Tuesday, September 18th, 2012, early Christianity scholar Karen L. King of the Harvard Divinity School announced the discovery of a Coptic papyrus fragment that includes the text “Jesus said to them, ‘My wife …’”

King has made it clear that this fourth-century “previously unknown gospel” does not imply that Jesus had a wife; instead, if authentic, the text reveals that an early Christian population believed that Jesus was married. King posits that the Coptic fragment is a translation of a late second-century Greek gospel. Interestingly, the earliest extant claim that Jesus was not married was recorded by Clement of Alexandra around 200 C.E.. These nearly contemporaneous yet divergent early Christian texts reveal that the extended debate on Jesus’ wife, his celibacy and Christian behavior dates back to an earlier period than previously believed.

The 1.5 x 3-inch Coptic papyrus fragment contains 8 lines on the front and six on the back. While the newly announced text is shrouded by a sea of unanswered questions—the original provenience is unknown and the owner of the collection has asked to remain anonymous—King consulted scholars from esteemed institutions including the Institute for the Study of the Ancient World, Princeton University, the Harvard Theological Review and the Hebrew University of Jerusalem, who verify the text’s authenticity.

King unveiled the discovery at Tuesday’s 10th International Congress of Coptic Studies in Rome and the announcement immediately attracted the media’s attention, which will undoubtedly lead to further testing. While the faded ink, the grammar and handwriting appear authentic, King plans to conduct spectrometry and further analysis on the papyrus’ date and authenticity.

Mary Magdalene as a Disciple

The passage “Jesus said to them, ‘My wife …’” is not the only revealing text in this Coptic papyrus fragment. Another clause says “she will be able to be my disciple.” Other phrases include “My mother gave to me life” and “Mary is worthy of it.” 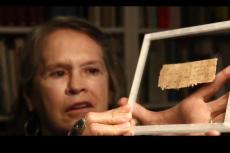 Karen King of the Harvard Divinity School examines what she describes as "a new gospel." The text does not prove the existence of Jesus’ wife; instead, it shows that an early Christian population believed that he was married.

Dan Brown caught the public’s attention with sensational stories of Mary Magdalene as Jesus’ wife. What was her role in the New Testament? Three of the four canonical gospels only mention her in connection with the death and resurrection of Jesus. Only Luke mentions Mary Magdalene in connection with Jesus’ life, where she follows Jesus, spreading word of his deeds from town to town.

More importantly, immediately following the first passage quoted above, Jesus goes on to explain Mary’s special role in terms of her capacity to receive his instruction—and not her sex appeal. When, in the Gospel of Philip, the disciples ask Jesus why he loves Mary more than them, Jesus responds, “Why do I not love you like her?” He then answers his own question: “When a blind man and one who sees are both together in darkness, they are no different from one another. When the light comes, then he who sees will see the light, and he who is blind will remain in darkness.”1 Jesus is suggesting that he favors Mary because she is like a sighted person compared with the dullard male disciples, who are like blind men. Thus, Mary’s “companionship” is spiritual rather than physical.

King’s “new gospel” may provide a more explicit indication that some early Christian communities believed that Jesus was married, and moreover, that Mary Magdalene was his wife. While the fragment’s date several centuries after the life of Jesus precludes contemporaneous evidence of the historical Jesus, the discovery may greatly further our understanding of early Christian perception of marriage and the New Testament.