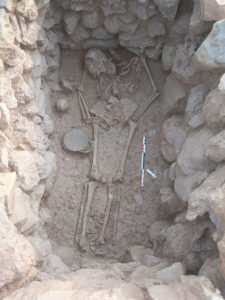 The box-shaped stone tomb holds a nearly intact female skeleton, as well as jewelry indicating the wealth of its occupant. The jewelry included costumes made of bone and bronze, a bronze mirror with an ivory handle, and a beaded necklace made of gold. This rare ancient tomb–and its contents–dates from the late Minoan period, some 3,000-3,500 years ago. The Minoan civilization was influential not only in the Aegean world and Europe but also throughout the ancient Middle East. As Eric H. Cline and Assaf Yasur-Landau speculated in “Aegeans in Israel: Minoan Frescoes at Tel Kabri” (Biblical Archaeology Review: July/August 2013), Minoan craftsmen, either on their own or as envoys for a palace or ruler, may have worked on palaces in many of the great cities of the region. Minoans are now known to have had extensive contacts across the Canaanite region (now Northern Israel), in Syria, Turkey, and even in Egypt. Remains of Minoan, or at least Aegean, style Frescoes appear at multiple sites. At the Egyptian site of Tell el-Dab’a, the excavated frescoes show bull leapers, like at Knossos, painted in front of a maze pattern, evoking the Greek myth of the Minotaur.

The archaeological site at Sissi, 2 miles from the ancient city of Mallia, in Crete has been the site of extensive excavations for ten years. More than 100 archaeologists participated in this year’s excavations, under the joint direction of the Belgian School of Athens (EBSA) in Sissi and the Ephorate of Antiquities of Lassithi. The director is Jan Driessen, Professor at the Belgian School.

Researchers have established that an Early Minoan settlement from around 2,600 B.C.E. was abandoned at Sissi. After that abandonment a large building was built east of the original village. It was destroyed by fire in approximately 2,500 B.C.E., but it’s remains were utilized in the construction of the monumental courtyard complex starting in about 1,700 B.C.E. Photo: ©EBSA, N. Kress
Monumental complex with central courtyard in Sissi with remnants of an older settlement to the northwest

In the late Minoan layer, along with Knossian-influenced pottery, researchers discovered the rare ancient tomb, containing the skeleton of a wealthy Minoan woman. The stone tomb had been built inside an older burial building from the preceding Neo-palatial period. In Crete, tombs of this type have only previously been found in Knossos and Chania.

The identity of this Minoan woman is almost definitely lost to history. She can’t tell us her story. Yet her burial may help inform researchers’ understanding of the ancient Minoans, a people who in addition to their pivotal role in the development of European “High Culture,” probably also had far-reaching influence across the ancient middle east.

Read the announcement of the discovery here (in Greek).

Learn more about ancient Minoan civilization in the BAS Library: