The significance of Judah’s signet, cord, and staff in Genesis 38

Genesis 38 recounts the saga of Judah and Tamar. Er, Judah’s oldest son, marries Tamar, but he dies, leaving her a childless widow. Er’s brother Onan then marries Tamar, according to levirate marriage (Deuteronomy 25:5–10), but he also dies without giving her any children. She then returns to her father’s household to wait to be married to Judah’s youngest son, Shelah. However, when Shelah comes of age, Judah does not rush to arrange the marriage.

Tamar then takes matters into her own hands. When she learns that Judah is traveling to Timnah, she veils herself and sits along the road. Judah mistakes her for a shrine prostitute and asks to sleep with her. They settle on payment: Judah will send her a young goat from his flock. Tamar agrees—but requests a pledge. She asks Judah to leave his signet, cord, and staff.

Why does Tamar ask for these three items? Zohar Amar of Bar-Ilan University and Naama Sukenik of the Israel Antiquities Authority explore Tamar’s motivations in “The Signs That Bind: Why Tamar Requested Judah’s Signet, Cord, and Staff,” published in the Fall 2021 issue of Biblical Archaeology Review. Through archaeological analysis, they show the significance of the signet, cord, and staff, especially in regard to identification in the ancient world. This ring belonged to Hatnefer, mother of Senenmut, an official during Pharaoh Hatshepsut’s reign, in the 15th century B.C.E. The ring comprises a steatite seal—with an engraved scorpion—in a gold setting. Photo: Public Domain.

They begin with the signet, the first requested item. Signets, or seals, were used to seal and authenticate documents. They were often made of stone and engraved with a symbol or name to identify the owner. Although signets’ importance was huge, their size was small. Many of these oval or cylindrical seals measured no more than a couple centimeters in length, which allowed them to be worn as jewelry. Such objects were prestigious, typically reserved for the elite.

The cord in Genesis 38 is not as easily identifiable as the signet. Yet Amar and Sukenik explore several possibilities, each of which relates to Judah’s high-ranking status. The cord might refer to an article of Judah’s clothing, such as a belt or garment tassel. Alternatively, the cord may have been attached to his signet and then worn. The authors explain the usage of cylinder seals with cords:

“In the case of cylinder seals, a hole was drilled through the center of the seal; a pin was typically inserted in this hole and then threaded into a cord, which allowed slack for the seal to be rolled freely across clay to create an impression. The cord could then be used to wear the seal on the neck as a pendant, or on the hand, wrist, or belt.”

The third item that Tamar requests, the staff, was a symbol of leadership and authority (e.g., Genesis 49:10; Numbers 17:1–10). Taken together, these items would have clearly identified Judah, as Amar and Sukenik explain:

“The signet, cord, and staff represent the emblems of the individual’s personal status—much like an ancient identity card. The fact that Judah possessed a signet, dressed in a garment decorated with tassels or wore his signet with a cord as jewelry, and had a staff in hand attests to his high status and importance as a leader.”

As the drama with Judah and Tamar unfolds, the three items reappear. First, Judah tries to send the goat to the shrine prostitute and recover his items, but she is nowhere to be found! Later, he learns that Tamar is pregnant. He condemns his daughter-in-law to death by burning, but at the critical moment—the climax of the drama—she unveils his insignia and reveals that she is pregnant by their owner. Recognizing his signet, cord, and staff, Judah relents from punishment and admits that she acted more righteously than he. 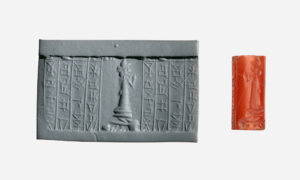 This Mesopotamian cylinder seal shows a goddess and an Akkadian inscription. (The inscription is repeated in the modern impression, to the left.) The seal is made of carnelian and measures about 2 centimeters in length. It has been dated to the 18th–17th centuries B.C.E. Photo: Public Domain.

Learn more about the significance of Judah’s signet, cord, and staff in Zohar Amar and Naama Sukenik’s article, “The Signs That Bind: Why Tamar Requested Judah’s Signet, Cord, and Staff,” published in the Fall 2021 issue of Biblical Archaeology Review.

Subscribers: Read the full article “The Signs That Bind: Why Tamar Requested Judah’s Signet, Cord, and Staff” by Zohar Amar and Naama Sukenik in the Fall 2021 issue of Biblical Archaeology Review.

Is This the Prophet Isaiah’s Signature?