Reading the story of Noah’s ark today (Genesis 6–9), we naturally imagine that Noah, his family, and the loaded animals of all kinds survived the flood aboard a large wooden ship or other seaworthy vessel. After all, the ark was a boat, right? How did Noah build the ark? While we typically imagine Noah building a ship to carry his family and animals, ancient biblical art depicts the ark as a simple wooden box with legs, as in this well-preserved mosaic floor found at the site of Mopsuestia in Turkey. Photo by Klaus-Peter Simon, own work, CC BY 3.0

Not so fast! Ancient biblical art depicts Noah’s ark not as a boat, but rather as a simple wooden box on legs. In his article “The Curious Case of Noah’s…Box?” in the Summer 2021 issue of Biblical Archaeology Review, archaeologist Shelley Wachsmann looks at examples of ancient biblical art and examines how early translations of the Hebrew word for “ark” may have influenced, in surprising and unexpected ways, ancient depictions of Noah’s fabled seaworthy construction.

So does ancient biblical art help us answer the question, “How did Noah build the ark?” It may seem odd, but early Christian and Jewish artists of the early first millennium C.E. portrayed Noah’s ark as a box, often with legs. The earliest depiction of the ark actually comes from the pagan city of Apamea Kibotos, where coins minted during the second and third centuries show Noah and his wife standing inside a box with an open lid. Above the lid is depicted a dove, bearing an olive branch, and a raven (Genesis 8:6–12). 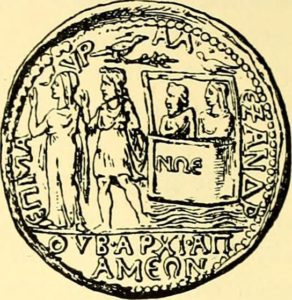 This Apamean coin shows Noah and his wife in the ark, which is depicted as a box with an open lid floating on water, with the name Noah written in Greek. The coin dates to the mid-third century C.E. Image by Internet Archive Book Images. Public Domain.

Noah’s ark and the biblical flood story are also recurring themes in the mosaic floors that adorned churches and synagogues throughout the ancient world. One of the best-preserved and most elaborate scenes comes from the site of Mopsuestia, Turkey, where dozens of animals surround an open chest with four legs (see image above). A Greek inscription depicted on the chest’s open lid reads “the ark of Noah the redeemer.” More recently, excavations at the fifth-century synagogue of Huqoq in northern Israel revealed a similar mosaic carpet, also showing the ark not as a boat, but as a wooden chest with legs.

So why does ancient biblical art depict Noah’s ark in this unusual way? The answer has to do with translation. While the original authors of the Pentateuch used distinct Hebrew terms to refer to Noah’s ark (tieveh) and the box-shaped “Ark” of the Covenant (aron), the Hebrew Bible’s Greek translators, who began their work in the third century B.C.E., used a single Greek word, kibotos, meaning an enclosed wooden container used to store valuables, to refer to both objects.

It seems likely, therefore, that early Jewish and Christians artists, working in the early first millennium C.E., were influenced by overly literal interpretations of the translated Hebrew Bible, which suggested to them that Noah’s ark and the Ark of the Covenant were similar in appearance.

In the free eBook Exploring Genesis: The Bible’s Ancient Traditions in Context, discover the cultural contexts for many of Israel’s latest traditions.

All-access and digital members: Read more about depictions of Noah’s ark in ancient biblical art in “The Curious Case of Noah’s…Box?” in the Summer 2021 issue of Biblical Archaeology Review.

All-Access Members, Read More About Noah’s Ark in the Library:

Collection: Noah and the Genesis Flood
The flood story is one of the best-known Biblical narratives. The Book of Genesis describes God’s call to Noah to build an ark for his family and two of every animal. In time, the earth would be flooded and the world would begin anew. Questions surrounding the historicity of the Biblical narrative, however, have plagued historians and archaeologists. What do textual and archaeological sources actually tell us about Noah and the flood story?

Was Noah’s Ark a Sewn Boat?
by: Ralph K. Pedersen
The story of Noah’s Ark may be the best known of all Biblical tales. The destruction of a sinful world by an angry God, the cleansing waters of the flood and the redemption of mankind through one righteous man continues to fascinate young and old alike. With the possible exception of the Titanic, Noah’s Ark may be the most famous vessel in history or literature. Yet little is actually known of its construction.

An Ancient Coin Depicts Noah’s Ark
by: Yaakov Meshorer
New evidence for the antiquity of the tradition associating Mt. Ararat in Turkey with the landing place of Noah’s Ark comes to us in the form of a unique coin on display at the Israel Museum. This large bronze medallion was struck 1700 years ago at Apameia Kibotos in Asia Minor (modern Turkey) near the mountains of Ararat where, it is said, Noah’s Ark came to rest after the flood.

A Futile Quest: The Search for Noah’s Ark
by: William H. Stiebing Jr.
A recent Readers’ Digest article which suggests that the remains of Noah’s Ark may yet be found atop Mount Ararat in eastern Turkey has rekindled enormous interest in the quest.