Huqoq is an ancient Jewish village located approximately three miles west of Capernaum and Migdal (Magdala) in the Galilee of Israel. The Huqoq Excavation Project, comprised of a consortium of universities led by Dr. Jodi Magness of the University of North Carolina at Chapel Hill, has completed four seasons of excavations. This fifth season of excavations will reveal further portions of a mosaic floor that decorated a Late Roman (fifth century C.E.) synagogue. The mosaics, first uncovered in 2012, include a scene of Samson carrying the gates of Gaza on his shoulders (Judges 16:3) (see image, right), a scene of Samson tying torches to the tails of foxes (Judges 15:4), a Hebrew inscription flanked by women, and a scene that includes battle elephants. This year, for the first time, all students and staff are working in the area of the ancient synagogue. Below, learn about the immense work that goes into running the Huqoq excavations.


As the point where three of the world’s major religions converge, Israel’s history is one of the richest and most complex in the world. Sift through the archaeology and history of this ancient land in the free eBook Israel: An Archaeological Journey, and get a view of these significant Biblical sites through an archaeologist’s lens.

The Logistics of a Dig 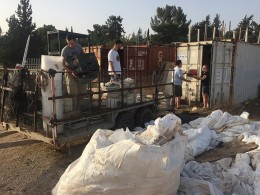 Students helping to load the administrator’s trailer with supplies for the dig. Photo: Courtesy the Huqoq Excavation Project.

Archaeology is more than finding a spot in the ground to dig. An excavation is a logistical feat. With around 50 participants this year, the Huqoq dig directors must coordinate meals, field trips, airport pick-ups, airport drop-offs, lectures, lab schedules and much more for each participant. The dig itself requires a permit from the Israel Antiquities Authority far in advance of our arrival.

Once we arrive, our dig administrator coordinates the process of moving all the necessary tools to the site. These tools include shade-cloths, pickaxes, sledgehammers, trowels, hoes, buckets, sifters, wheelbarrows, sandbags, tables, desks, chairs and much more. Students line up in large chains, transferring the contents of two storage bins into the back of the administrator’s truck—only to unload the same contents 30 minutes later on the site.

After the dig begins, many students will volunteer in two labs on site. The first lab is where the dig registrar works. The registrar’s job is to catalogue every artifact and bucket brought back from the site. Once catalogued, all material then transfers to the second lab, where specialists, such as the ceramicist, the archaeobotanist and the glass specialist will examine the respective finds in greater detail.

When one step back and looks at the amount of work a season of excavation requires, it is amazing how smoothly everything often runs.

Bradley Erickson is a Ph.D. student in the Department Of Religious Studies at the University of North Carolina at Chapel Hill.

For more on the 2015 field season at Huqoq, read “Inside an Archaeologist’s Toolkit.”

Jodi Magness Reflects on a Lucky Discovery: In her Archaeological Views column in the March/April 2015 issue of BAR, Jodi Magness reflects on the consequences of discovering stunning mosaics at Huqoq.