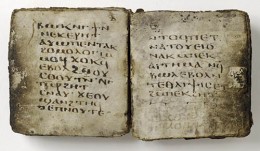 The miniature codex, LiveScience reports, is composed of pages just 3 inches in height and contains 37 oracles that would have been used for divination.

The opening lines of the codex read, in Coptic (a script adapted from Greek and used by Egyptian Christians):

“The Gospel of the lots of Mary, the mother of the Lord Jesus Christ, she to whom Gabriel the Archangel brought the good news. He who will go forward with his whole heart will obtain what he seeks. Only do not be of two minds.”

In this context, “lots” refer to objects drawn at random to make a decision. The Gospel of the Lots of Mary is not a gospel (from evangelion—“good news”) in the traditional sense that it describes the life and death of Jesus or is canonized as part of the New Testament. This gospel combines divinatory phrases and Biblical allusions.

“The fact that this book is called that way is very significant,” Luijendijk told LiveScience. “To me, it also really indicated that it had something to do [with] how people would consult it and also about being [seen] as good news. Nobody who wants to know the future wants to hear bad news in a sense.”

According to Luijendijk, the gospel would have been used like this: A person who needed guidance or an answer to a question would go through the book and randomly pick out an oracle for the solution—leaving the selection all up to chance. The small size of the codex meant it could be carried around easily.

The Gospel of the Lots of Mary, then, is sort of like an ancient Magic 8 Ball. And like the Magic 8 Ball, the oracles are vague enough that one could draw personalized interpretations from them. For instance, oracle 34 reads:

“Go forward immediately. This is a thing from God. You know that, behold, for many days you are suffering greatly. But it is of no concern to you, because you have come to the haven of victory.”

Read more about The Gospel of the Lots of Mary in LiveScience.

A version of this article was previously published in BHD on February 10, 2015