From early Christianity to medieval Nubia 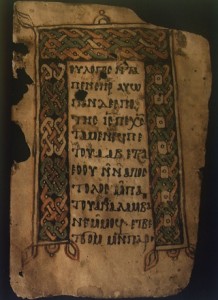 Early Christian worship was diverse and frequently intense. Some aspects, such as the charisms (“spiritual gifts”) described by Paul in 1 Corinthians 12, might take on very different forms from meeting to meeting; others, such as baptism and the Eucharist, developed more standardized forms even as the movement spread. Yet even these core rituals encompassed radically different practices and meanings. Some groups, for example, used water rather than wine in the Eucharist, in keeping with a broader emphasis on moderation in food and abstention from sex.

Other ancient Christian rituals are less familiar, sometimes because they were associated with groups eventually labeled as heretical and persecuted. Thus, the ritual of the Bridal Chamber, as practiced by Valentinians, can only be reconstructed through brief and uncertain references in texts such as the Gospel of Philip.

Perhaps the most famous of these “alternative” rituals is the dance of Jesus and the apostles as portrayed in the Acts of John, a vivid and imaginative second-century description of the apostle’s missionary journey. In one section, the apostle John recalls how, on the night before his arrest and crucifixion, Jesus commanded the apostles to form a circle around him, and to dance as he sang a hymn to which they responded in a series of “Amens.”

Most scholars agree that this fascinating text functioned as an etiology (a foundational narrative) for a ritual of dance. Like the Eucharist, it is instituted on Jesus’ last night with the apostles, and the event is described as a “mystery.” Because the apostles are enjoined to keep silent about their dance, and terms such as “Ogdoad” (the eighth heaven) are used in the corresponding hymn, some have argued that the ritual was “gnostic,” and that its disappearance was linked to the persecution and eventual disappearance of such groups under the Christian Roman Empire. Indeed, a clear allusion to the dance scene from the Acts of John is found in the psalms of the Manichaeans, archetypical heretics who were liable to capital punishment and the burning of their books.

“New” evidence has complicated this picture, namely the recent publication of a Coptic manuscript (see image above), dated to approximately the ninth century, containing a very similar dance scene. The manuscript was discovered in an abandoned monastery at Qasr el-Wizz—a settlement in Nobadia, the northernmost of the three medieval Christian kingdoms of Nubia—during rescue excavations in the 1960s (the site is now under Lake Nasser near the southern borders of Egypt). One of the texts, which scholars call the Dance of the Savior, features a dance similar to the one in the Acts of John. As the apostles circle around, Jesus addresses the cross in a series of short hymns, proclaiming the glory and triumph of the crucifixion. The presence of the dance scene in a Coptic text from the Qasr el-Wizz monastery suggests that ritual dance enjoyed a place in established, orthodox Christianity, not only in medieval Nubia, where the manuscript was found, but also in late Roman Egypt, where it was originally composed. Indeed, while apocryphal texts are themselves generally associated with heresy, I have argued that many non-canonical texts such as the Dance of the Savior were produced and promoted by bishops, and employed liturgically in places like churches and martyr shrines. In the Christian Roman Empire, liturgical dancing was a part of common events such as saints’ festivals. Some polemicists saw this as an inappropriate expression of piety, uncomfortably close to pagan traditions like pantomime or Dionysian revelries. But it was also related to imperial celebrations: In 630 C.E. the emperor Heraclius is said to have danced in front of the Cross when it was returned to Jerusalem from Persian captivity, presumably in imitation of King David’s dance before the Ark of the Covenant.

The role of dance in the medieval Nubian liturgy is uncertain. The victorious cross, which is celebrated in the Dance of the Savior, was a central theme in Old Nubian literature and art; as in Roman Egypt, it was probably associated with royal authority. A painting recently discovered by a team from the Polish Centre of Mediterranean Archaeology during their excavations of the Monastery of Anthony the Great at Old Dongola, capital of the central Nubian kingdom Makuria, suggests that dance played an important role there as well (see second image). Some of the dancing figures are masked, and others play musical instruments. The accompanying Old Nubian inscriptions are still being deciphered. While it is unlikely that this practice was directly related to the ancient traditions of Jesus’s dance with the apostles, apocryphal texts such as the Dance of the Savior offers legitimation for similar rituals in diverse pre-modern cultural contexts.

Paul Dilley is an Associate Professor at the University of Iowa with a joint appointment in the departments of religious studies and classics. His research specialty is ancient Mediterranean religions, including early Christianity. His blog, www.hieroilogoi.org, covers digital resources for the religions of Late Antiquity. Follow him on Twitter @BabelAlexandria.

Learn about the Nag Hammadi codices and Gnostic Christianity in Bible History Daily.

This Bible History Daily feature was originally published on August 8, 2014.