Protective Christian charm is one of world’s earliest known 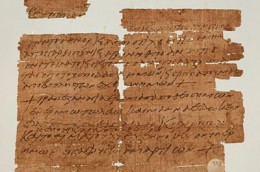 A recently discovered 1,500-year-old papyrus fragment containing a protective Christian prayer is one of the earliest surviving texts of its kind. Historian Roberta Mazza found the Christian amulet among the thousands of unpublished historical documents kept at the University of Manchester’s John Rylands Research Institute. The early Christian prayer, written in Greek, references the Eucharist—a Christian ritual commemorating Jesus’ Last Supper—and “manna of the new covenant.”

The Christian amulet was recycled from a receipt for the payment of a grain tax—on the other side of the receipt, Biblical passages from the books of Psalms and Matthew were written. The papyrus fragment would have been folded up and put into a locket to protect the wearer from evil. This early Christian practice stems from the ancient Egyptians, who wore prayer texts as protective charms.

“We can say this is an incredibly rare example of Christianity and the Bible becoming meaningful to ordinary people—not just priests and the elite,” Mazza said in a University of Manchester press release. “It’s doubly fascinating because the amulet maker clearly knew the Bible, but made lots of mistakes […] This suggests that he was writing by heart rather than copying it.”
Read the full text of the Christian amulet:

“Fear you all who rule over the earth.

Know you nations and peoples that Christ is our God.

For he spoke and they came to being, he commanded and they were created; he put everything under our feet and delivered us from the wish of our enemies.

Our God prepared a sacred table in the desert for the people and gave manna of the new covenant to eat, the Lord’s immortal body and the blood of Christ poured for us in remission of sins.”

For more information on the Christian amulet, read the University of Manchester press release.

Read about a monotheistic Jewish amulet discovered near the Roman frontier city of Carnuntum in Bible History Daily.

Learn more about ancient amulets in the BAS Library: