Geza Vermes on the transition from Jewish Christians to Gentiles 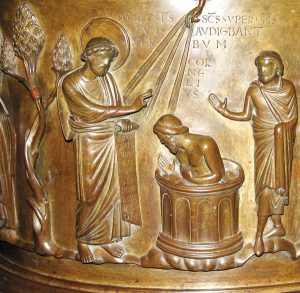 A turning point in the Jesus movement, Peter baptizes the Roman centurion Cornelius, the first non-Jewish Christian, in Jerusalem (Acts 10), as shown in one of five baptism scenes on a 12th-century baptismal font in St. Bartholomew’s Church in Liège, Belgium. Image: Jean-Pol Grandmont.

Today the concept of “Jewish Christians” may sound like a confusion of two religions. However, to understand the origin of Christianity, one must begin with the population of Jewish Christians who lived during Jesus’ lifetime. In the November/December 2012 issue of Biblical Archaeology Review, Dead Sea Scroll and early Christianity scholar Geza Vermes explored the origin of Christianity by examining the characteristics of the Jewish Jesus movement to see how it developed into a distinctly gentile religion.

In the New Testament, Jesus only preaches to a Jewish audience. Geza Vermes described the mission of the 11 apostles to preach to “all the nations” (Matthew 28:19) as a “‘post-Resurrection’ idea.” After the crucifixion, the apostles began to champion a new faith in Jesus and the ranks of the Jesus movement (known as “the Way” at the time) swelled to 3,000 Jewish converts. At first, these followers were distinctly Jewish, following Mosaic law, Temple traditions and dietary customs.

In BAR, Geza Vermes wrote: “Acts identifies the demographic watershed regarding the composition of the Jesus movement. It began around 40 C.E. with the admission into the church of the family of the Roman centurion Cornelius in Caesarea (Acts 10). Later came the gentile members of the mixed Jewish-Greek church in Antioch (Acts 11:19–24; Galatians 2:11–14), as well as the many pagan converts of Paul in Syria, Asia Minor and Greece. With them the Jewish monopoly in the new movement came to an end. Jewish and gentile Christianity was born.”

As gentiles joined the Jesus movement, focus on Jewish law decreased and we start to see the origin of Christianity as a distinct religion. Jewish Christians in Jerusalem participated in separate Jewish services from the gentile Christian population, and while the two groups agreed on Jesus’ message and importance, the separate rites and communities led to increasing division between the groups. 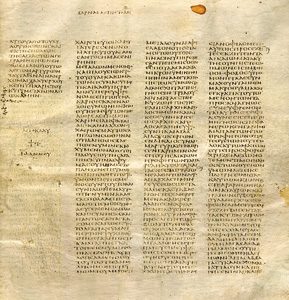 The early-second-century Epistle of Barnabas is one of the earliest expressions of gentile Christianity and describes Jesus as quasi-divine. Photo: ©The British Library.

Geza Vermes presents the late first century C.E. Jewish Christian Didache as an important text for understanding the Jewish Jesus movement. The Christian document focuses on Mosaic Law and the love of God and the neighbor, and describes the observance of Jewish traditions alongside baptism and the recitation of “Our Father.” The Didache treats Jesus as a charismatic prophet, referring to Jesus with the term pais, a word for servant or child that is also used for King David, rather than the “Son of God.”

By contrast, the early second century Epistle of Barnabas shows a distinctly gentile Christianity in its presentation of the Hebrew Bible as allegory instead of covenantal fact. The clearly divinized Jesus in this document is distanced from the Jewish Christians and the divide between the Christian communities continued to widen over time. Geza Vermes writes that after Hadrian’s suppression of the Second Jewish Revolt, the Jewish Christians quickly became a minority group in the newly established church. At this point we can see the origin of Christianity as a distinctly non-Jewish religion; late in the second century, the Jewish Christians either rejoined their Jewish peers or become part of the newly gentile Christian church.

——————
For more on the origin of Christianity, read Geza Vermes’s “From Jewish to Gentile: How the Jesus Movement Became Christianity” as it appeared in Biblical Archaeology Review, November/December 2012.