What happened at Pentecost?

“All of them were filled with the Holy Spirit and began to speak in other languages, as the Spirit gave them ability.”
—Acts 2:4 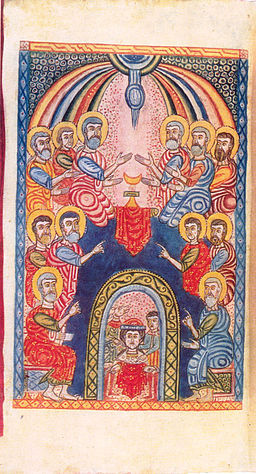 SPEAKING IN TONGUES IN THE BIBLE. This Armenian manuscript was illustrated by Zakaria Gnunetsi in 1575. It depicts Acts 2 when Jesus’ disciples receive the gift of speaking in tongues at Pentecost. Some believe this is the first instance of glossolalia in the Bible, but others maintain that the disciples are speaking human languages.

What happened at Pentecost in the New Testament?

Acts 2 describes a miracle: During the festival of Pentecost, Jesus’ disciples are given the Holy Spirit, and they begin speaking in tongues (other languages). Are the disciples speaking in human languages, or is this an instance of glossolalia in the Bible?

Ben Witherington III addresses what happened at Pentecost in his Biblical Views column “Speaking in the Tongues of Men or Angels?” in the July/August 2015 issue of Biblical Archaeology Review. While some believe that Acts 2 is the first instance of glossolalia in the Bible, he maintains that it is not.

When the disciples begin speaking in tongues, Acts 2:6 says that the crowd of Diaspora Jews who were in Jerusalem for the festival of Pentecost “gathered and was bewildered, because each one heard them speaking in the native language of each.”

Those who believe this is an instance of glossolalia in the Bible say that two miracles took place: The disciples were speaking in angelic tongues, and each person heard the message in his native language. However, Ben Witherington III contends that just one miracle occurred. The disciples miraculously began speaking other human languages, which is supported by the Greek grammar of Acts 2:6. Witherington explains:

The phrase “in their native language” modifies the verb “speaking” in verse 6, not the verb “hearing.” So there is exactly one miracle of speech at Pentecost—a miracle my Greek students regularly pray for, namely, the ability to suddenly speak a foreign language without further study! In short, the Pentecost story is not about glossolalia, despite the name of the modern Protestant denomination. If you want to find a story about glossolalia in a story about conversion in Acts, then you should turn to the story of Cornelius in Acts 10. TOWER OF BABEL. Pieter Bruegel the Elder’s painting Tower of Babel is on display at the Kunsthistorisches Museum in Vienna. Ben Witherington III explains that what happened at Pentecost—speaking in tongues—overcame the effect of the Tower of Babel—the confusion of language.

To see Ben Witherington III’s full analysis of what happened at Pentecost, read his Biblical Views column “Speaking in the Tongues of Men or Angels?” in the July/August 2015 issue of BAR.

——————
BAS Library Members: Read the full Biblical Views column “Speaking in the Tongues of Men or Angels?” by Ben Witherington III in the July/August 2015 issue of Biblical Archaeology Review.

Learn more about Pentecost and read more articles by Ben Witherington III in the BAS Library:

Ben Witherington III, “In the Beginning: Religion at the Dawn of Civilization,” Biblical Archaeology Review, January/February 2013.

This Bible History Daily feature was originally published on July 13, 2015.