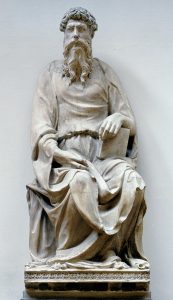 The evangelist John rests one hand on his gospel book, in this 83-inch-tall marble sculpture carved by Donatello in about 1415 for a niche in the facade of the Cathedral of Florence. Scholars writing Gospel of John commentary often grapple with the question: Who wrote the Gospel of John? Photo: Erich Lessing.

The Gospels, the first four books of the New Testament, tell the story of the life of Jesus. Yet only one—the Gospel of John—claims to be an eyewitness account, the testimony of the unnamed “disciple whom Jesus loved.” (“This is the disciple who is testifying to these things and wrote these things, and we know that his testimony is true” [John 21:24]). “Who wrote the Gospel of John?” is a question that remains unanswered, though noted theologians throughout the ages maintain that it was indeed the disciple John who penned the famous Biblical book.

We may never know for certain who wrote the Gospel of John, any more than we can know who wrote the books of Matthew, Mark and Luke. We do know that John is a gospel apart, however. Early Matthew, Mark and Luke are so alike in their telling that they are called the Synoptic Gospels, meaning “seen together”—the parallels are clear when they are looked at side by side. Matthew and Luke follow the version of events in Mark, which is thought by scholars to be the earliest and most historically accurate Gospel. John, however, does not include the same incidents or chronology found in the other three Gospels, and the fact that it is so different has spurred a debate over whether John’s Gospel is historical or not, something that has been noted in Gospel of John commentary for hundreds—even thousands—of years.

Several hypotheses have attempted to explain why so much of Jesus’ life not portrayed in the Synoptics is present in John and vice versa. One hypothesis claims that John recorded many of the events that occurred before the arrest of John the Baptist, while the Synoptics all have Jesus’ ministry beginning only after the arrest. Another holds that John was written last, by someone who knew about the other three Gospels, but who wished to write a spiritual gospel instead of an historical one. This would mean that the person who wrote the Gospel of John would not have been a contemporary of Jesus, and therefore would not have been an eyewitness as the author claims. There is also the possibility that the author of John did not know of Mark and hence did not have the same information.

One of the facts in dispute among the four Gospels is the length of Jesus’ ministry. According to the Synoptics, it lasted only about a year, while John has Jesus ministering between two and three years. The Jesus of John’s telling also knew Jerusalem well and had traveled there three or four times. The Synoptics, however, have Jesus visit Jerusalem only once. In John, Jesus had friends near Jerusalem, including Mary, Martha and Lazarus of the town of Bethany, which is just outside of the city on the east slope of the Mount of Olives.

The author of John also knew Jerusalem well, as is evident from the geographic and place name information throughout the book. He mentions, among others, the Sheep Gate Pool (Bethesda), the Siloam Pool and Jacob’s Well. The geographic specificity lends credence to the John’s account.

Another aspect of John that may be more historically accurate than the Synoptics is the account of the crucifixion and the events that led up to it. The Synoptics say that Jesus’ Last Supper was the Passover meal—held that year on a Thursday evening (Jewish holidays begin at sunset)—and they would have us believe that the Sanhedrin, the high court, gathered at the beginning of a major holiday to interrogate Jesus and hand him over to the Romans. John, in contrast, has Jesus handed over for crucifixion on “the day of Preparation of Passover week, about the sixth hour.” According to John, the Last Supper is not a Passover meal (because the holiday that year did not start until Friday evening), and Jesus is crucified and buried before Passover begins. In John’s account Jesus becomes the Passover sacrificial lamb, which was offered the afternoon before the Passover holiday. Some scholars suggest that John may be more historical regarding the crucifixion than the other three Gospels.

Given John’s familiarity with Jerusalem and its environs, it is very possible that he had visited the Pool of Siloam, which he mentions in connection with the story of the curing of the blind man (a story that appears only in John’s Gospel). It is that pool that has only recently been uncovered, as described in the accompanying article.

Based on “How Historical is the Gospel of John?” Biblical Archaeology Review, September/October 2005.

This Bible History Daily article was originally published in March 2012.