The mysterious beings of Genesis 6 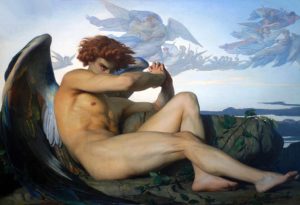 The Nephilim, the product of the sons of god mingling with the daughters of Adam, the great biblical giants, “the fallen ones,” the Rephaim, “the dead ones”—these descriptions are all applied to one group of characters found within the Hebrew Bible. Who are the Nephilim? From where do the “heroes of old, the men of renown” come?

Genesis 6:1–4 tells the readers that the Nephilim, which means “fallen ones” when translated into English, were the product of copulation between the divine beings (lit. sons of god) and human women (lit. daughters of Adam). The Nephilim are known as great warriors and biblical giants (see Ezekiel 32:27 and Numbers 13:33).

It was once claimed that the mating of the sons of god and the daughters of Adam that resulted in the Nephilim caused the flood, and this caused the Nephilim to have a negative reputation. This was believed because the next verse (Genesis 6:5) is the introduction to the flood narrative and because their name means “fallen ones.” It is unlikely that this interpretation is correct because Genesis 6:4 presents nothing but praise for the Nephilim and no criticism is present. In addition, the name “fallen ones” is likely a reference to their divine paternity transforming—falling—into the human condition, albeit an almost superhuman condition.

Genesis 6, Ezekiel 32, and Numbers 13 are the only passages that mention the Nephilim by that term. So where do the names Rephaim and “the dead ones” originate? The first thing to recognize is that these are not two separate titles, but rather a name, Rephaim, and a meaning, “dead ones.” The Bible refers to two groups as the Rephaim. The first are dead people who have achieved an almost divine status, similar to the concept of Saints. The second is a term that is applied to races of biblical giants. It is this second usage that is often conflated with the Nephilim.

The Rephaim appear in Deuteronomy 2:11; 3:11; 2 Samuel 21:19 and Joshua 11:22 and almost always take the form of one member of the Rephaim (Anaqim, Og, Goliath) being in opposition with Israel or its representative. In this sense, the Rephaim live up to their name, as their purpose in each narrative is to die. The juxtaposition of the mighty biblical giants defeated by the underdog, God’s chosen, is foreshadowed in the very name attributed to these characters.

When the Sons of God Cavorted with the Daughters of Men

Enoch’s Vision of the Next World

This Bible History Daily article was originally published on November 19, 2014.