“In the fifth year of King Rehoboam, King Shishak of Egypt marched against Jerusalem.”
—1 Kings 14:25

Shishak, actually Pharaoh Sheshonq I, left his own account of this northern campaign carved into the walls of the Temple of Karnak in Egypt, but he does not mention Jerusalem among the places he conquered. Israeli scholar Yigal Levin’s article “Did Pharaoh Sheshonq Attack Jerusalem” in the July/August 2012 issue of Biblical Archaeology Review examines the historical veracity of both the Egyptian Pharaoh’s account and the Bible’s. 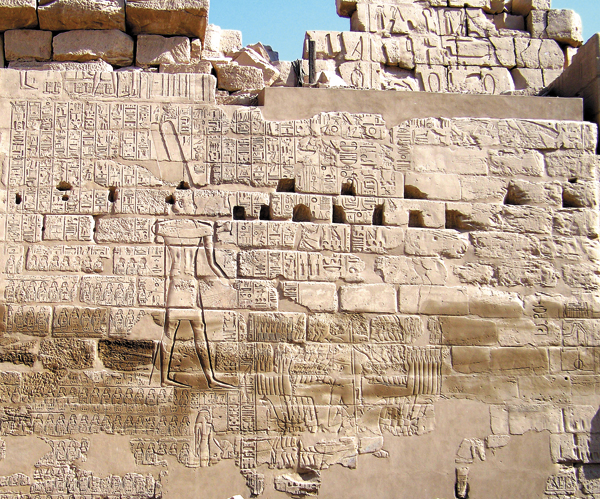 The Bubastite Portal includes a large weathered relief in which the pharaoh lists more than 150 towns and peoples he conquered during his military campaign into Israel and Judah in c. 925 B.C.E. Photo: © Regents of the University of California/Courtesy the Digital Karnak Project.

Levin points out that if the Egyptian Pharaoh’s records on the Bubastite Portal match those from 1 Kings, “this would be the earliest event in Biblical history for which we have a contemporaneous reference in an extrabiblical source.” Moreover, Egyptian records of Sheshonq’s rule between 945 and 925 B.C.E. could be used to date the reigns of Rehoboam’s father, Solomon, and his grandfather, David.

Sheshonq was no modest conqueror (Egyptian pharaohs rarely were) and built a great colonnaded forecourt to the temple of Amun in Karnak, including the famous Bubastite Portal. On the Bubastite Portal, Sheshonq is supported by Amun and other gods as he smites his enemies in Asia, who are bound in the depiction below him. Each prisoner features a name-ring with a toponym, identifying a place that Sheshonq conquered or destroyed.

Jerusalem is the only city that Shishak destroys in Kings, but it is not among the surviving toponyms on the Bubastite Portal, which does mention campaigns in Judah, including a mention of fighting in Megiddo. Rehoboam and Jeroboam are also conspicuously absent. More than 150 hieroglyphic name-rings, each represented as a bound and tethered Asiatic captive, give the names of the towns conquered by Sheshonq during his northern campaign. While some of the names clearly refer to towns known from the Bible, such as Arad, Beth-Shean and Megiddo, the identification of others is uncertain, while many names are now unreadable. Noticeably absent from the relief is the name for Jerusalem. Shown here are name-rings from the sixth and seventh rows, in the lower register of the relief, names that are usually associated with toponyms in Israel’s southern Negev desert. Photo: © Erich Lessing.

Why was Jerusalem not mentioned on the Bubastite Portal, and why does the passage in Kings mention Jerusalem but not Sheshonq’s other campaigns in Judah? Some scholars believe that Jerusalem’s toponym was erased by time. Others believe that Rehoboam’s tribute to Sheshonq saved the city from destruction and therefore from the Bubastite Portal’s lists. Still others suggest that Sheshonq claimed conquest that he did not enact (Egyptian Pharaohs made false claims about their conquests frequently) and copied the list of conquered territories from an old Pharaoh’s conquest list. Finally, as Kings is a religious text, it focuses on Jerusalem without including full details on the military, history and politics of the surrounding region, though Chronicles tells a fuller account of the Egyptian invasion.

Yigal Levin and most modern scholars believe the Bubastite Portal recounts legitimate and historical campaigns conducted by the Egyptian Pharaoh Sheshonq. He says that “Sheshonq’s campaign in Israel and Judah brought an end to the many architectural, military and political achievements of the United Monarchy of David and
Solomon and ushered in a new age—that of the nation divided.”

——————
Read the full article “Did Pharaoh Sheshonq Attack Jerusalem” by Yigal Levin in the July/August 2012 issue of Biblical Archaeology Review to find out what Levin learns about the chronology and itinerary of Sheshonq’s campaign. Not a BAS Library or All-Access Member yet? Join today.