Examining the nativity stories in Matthew and Luke 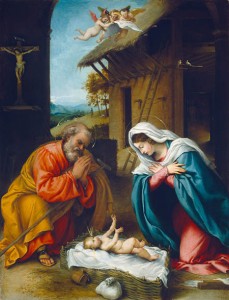 Was Joseph Jesus’ biological father or adoptive father? Joseph is a major figure in the nativity stories in Matthew and Luke. Along with Mary, he is depicted at Jesus’ birth in this 16th-century painting by Lorenzo Lotto. Photo: Courtesy National Gallery of Art, Washington, DC.

The annunciation stories in the Gospels of Matthew and Luke recount that Jesus was conceived without the participation of a human male. Ancient views on the biology of conception—based on Aristotelian theory—differed from our modern understanding of genetics and biology. For Jesus to have been considered fully human by our modern standards—and not a semi-divine or special being—he would have needed complete human DNA. While Mary would have supplied the X chromosome, who supplied the essential Y chromosome? God? Joseph?

Andrew Lincoln of the University of Gloucestershire tackles these questions in his article “How Babies Were Made in Jesus’ Time” in the November/December 2014 issue of BAR. Starting with the nativity stories in Matthew and Luke, he examines what early Christians thought about conception and explains how views about this subject have changed over time.

Who was Jesus’ biological father? As modern readers, we might wonder how the product of a virginal conception could truly be human—since the Y chromosome did not come from a human father. Andrew Lincoln explains that this issue would not have been troubling to an ancient audience or to the writers of the nativity stories in Matthew and Luke:

Their understanding of conception, shaped by a patriarchal culture, would have been some variation of the dominant Aristotelian theory. On this view, the male semen provides the formative principle for life. The female menstrual blood supplies the matter for the fetus, and the womb the medium for the semen’s nurture. The man’s seed transmits his logos (rational cause) and pneuma (vital heat/animating spirit), for which the woman’s body is the receptacle. In this way the male functions as the active, efficient cause of reproduction, and the female functions as the provider of the matter to which the male seed gives definition. In short, the bodily substance necessary for a human fetus comes from the mother, while the life force originates with the father.

Those who heard the nativity stories in Matthew and Luke would have considered Jesus to be fully human since his mother supplied all of his bodily substance. Lincoln clarifies: “In terms of ancient biology, even without a human father, Jesus would have been seen as fully human. His mother, Mary, provided his human substance, and in this case God, through the agency of the divine Spirit, supplied the animating principle instead of a human father.”

According to the New Testament, was Joseph Jesus’ biological father or just his adoptive father?

The annunciation stories in Matthew and Luke claim that Jesus was conceived without a human father, but later in the Gospel of Luke, Joseph is listed as Jesus’ parent and father (Luke 2:27, 33, 48; 4:22). Indeed, through Joseph’s lineage, Jesus is shown to have descended from King David (Luke 3:23–38). Do these accounts contradict the annunciation stories?

The traditional way of reconciling these seemingly incongruous accounts is that Joseph was Jesus’ adoptive father.

In his article, Lincoln offers another way: He posits that knowing the genre of the Gospels helps make sense of this apparent contradiction. As a subset of ancient Greco-Roman biography, the Gospels can be compared to other Greco-Roman biographies, such as Plutarch’s biographies of Theseus, Romulus and Alexander the Great. In these examples, the central character is given two conception stories, one natural and the other supernatural.

Read “Did Jesus Exist? Searching for Evidence Beyond the Bible” by Lawrence Mykytiuk from the January/February 2015 issue of BAR >>

Dual conception stories for the same figure was not uncommon in Greco-Roman biographies, and Lincoln suggests that this was a way of assigning significance and worth to those “who were perceived to have achieved greatness in their later lives.” In this genre, those who accomplished great things in their adult lives deserved an equally great—even supernatural—conception story.

Lincoln’s approach is certainly intriguing—especially when applied to the nativity stories in Matthew and Luke. To read Lincoln’s entire treatment of the matter and learn more about what early Christians thought about conception, read the full article “How Babies Were Made in Jesus’ Time” by Andrew Lincoln in the November/December 2014 issue of BAR.

——————
BAS Library Members: Read the full article “How Babies Were Made in Jesus’ Time” by Andrew Lincoln in the November/December 2014 issue of Biblical Archaeology Review. Not a BAS Library or All-Access Member yet? Join today.

Learn more about ancient views of conception in the BAS Library:

This Bible History Daily feature was originally published on November 3, 2014.