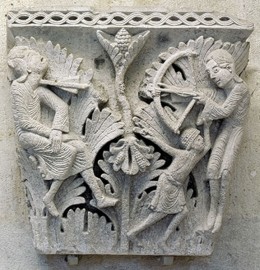 DID LAMECH KILL CAIN? How did Cain die? This 12th-century column capital from the Cathedral of Saint-Lazre in France depicts Lamech hunting with his son Tubal-Cain. They accidentally shoot and kill Cain, mistaking him for a wild animal. Photo: Cathedral Museum of St. Lazare, Autun, Burgundy, France/The Bridgeman Art Library.

What happened to Cain in the Bible? In the Book of Genesis, we are told about Cain’s birth, his violent act of fratricide and his subsequent exile. We learn that he married and had descendants, but the Bible is strangely mute about his death.

How did Cain die? If he did not die naturally, who killed Cain? In the Bible, do we have any clues? John Byron, professor of New Testament at Ashland Theological Seminary, tackles these questions in his Biblical Views column “Did Cain Get Away with Murder?” which appears in the May/June 2014 issue of BAR.

Byron explains that ancient interpreters were not afraid to change the story of Cain in the Bible to fit with their sense of justice, ensuring that he was adequately punished for killing his brother Abel. One of the most popular interpretations credits Lamech—Cain’s great, great grandson—with killing Cain.
Lamech admits to having killed a man in Genesis 4:23–24. Ancient interpreters believed that this passage sheds light on who killed Cain in the Bible, and they identified the man Lamech killed in verse 23 with Cain.

How and why did Lamech kill Cain? According to the Lamech legend—which was based on Genesis 4 but which evolved over the centuries—Lamech accidentally killed Cain while he was hunting with his son Tubal-Cain. In the legend, Lamech is a blind but skilled hunter, and Tubal-Cain accompanies him to direct his bow and arrow. Hearing a noise in the bushes, they shoot what they think is a wild animal. Upon investigation, though, they discover that Lamech’s arrow has killed Cain.

In this version of events, how did Cain die? Like an animal. Justice is served.

However, the Lamech legend is just one of the ways ancient interpreters sought to answer the question: How did Cain die? Did Cain die in the flood? Did he die naturally? Did Lamech kill Cain? If Lamech did not, then was there someone else who killed Cain? In the Bible, we will not find a definitive answer.

To find out more about the Lamech legend and other interpretations that seek to explain what happened to Cain in the Bible, read the full Biblical Views column by John Byron, professor of New Testament at Ashland Theological Seminary, in the May/June 2014 issue of BAR.

——————
Subscribers: Read the full Biblical Views column “Did Cain Get Away with Murder?” by John Byron, professor of New Testament at Ashland Theological Seminary in the May/June 2014 issue of Biblical Archaeology Review.

Who Was the Wife of Cain? Who did Cain marry? Where did she come from? Mary Joan Winn Leith suggests that while the Israelite storyteller knew that other men and women in Genesis existed outside of Eden, they did not matter to him or factor into his account.

The Adam and Eve Story: Eve Came From Where? The Book of Genesis tells us that God created woman from one of Adam’s ribs. But Biblical scholar Ziony Zevit says that the traditional translation of the Biblical text is wrong: Eve came from a different part of Adam’s body—his baculum.

This Bible History Daily feature was originally published on April 28, 2014.