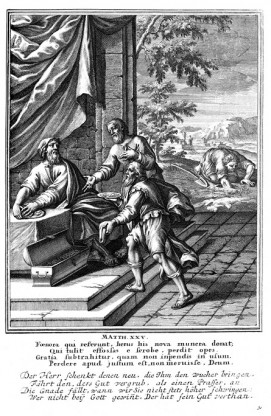 What does the Parable of the Talents mean? This woodcut from Historiae Celebriores Veteris Testamenti Iconibus Representatae—dated to 1712—depicts the Talents’ parable (Matthew 25:14–30). Two men bring the money that was entrusted to them back to their master, while a third man searches for his money outside.

What does the Parable of the Talents mean?

Jesus tells the Parable of the Talents (or the Talents’ parable) to his disciples. It appears in Matthew 25:14–30, and another version of the parable can be found in Luke 19:11–27. The story in Matthew 25:14–30 unfolds as such: A man goes away on a trip. Before he leaves, he entrusts money to his slaves. To one he gives five talents, to the second he gives two talents, and to the third he gives a single talent. The first two slaves double their money; they give the original investment and their profit to their master when he returns. The third slave, however, buries his talent out in a field instead of trying to make a profit; he returns only this when his master comes back. The master is pleased with the first two slaves, but he is dissatisfied with the third’s actions. He reprimands this slave and casts him out into the darkness.

Richard L. Rohrbaugh examines the Parable of the Talents’ meaning in his Biblical Views column “Reading the Bible Through Ancient Eyes” in the September/October 2016 issue of Biblical Archaeology Review. Although the story itself is fairly straightforward, Rohrbaugh argues that the Parable of the Talents’ meaning is less clear. An ancient audience would have interpreted it differently than a modern one.

The Talents’ parable has typically been interpreted by the Western church as being about proper investment: Jesus’ disciples are urged to use their abilities and gifts to serve God—without reservation and without fear of taking risks. Rohrbaugh, however, argues that the Talents’ parable is all about exploitation. Whereas a modern, Western audience would applaud the first two slaves for trading and investing well, an ancient audience would have approved of the third slave’s behavior and condemned that of the first two slaves because they profited at the expense of others. Rohrbaugh explains:

[G]iven the “limited good” outlook of ancient Mediterranean cultures, seeking “more” was considered morally wrong. Because the pie was “limited” and already all distributed, anyone getting “more” meant someone else got less. Thus honorable people did not try to get more, and those who did were automatically considered thieves: To have gained, to have accumulated more than one started with, is to have taken the share of someone else.

This interpretation of the Parable of the Talents’ meaning casts the actions of the first two slaves as shameful and that of the third slave as honorable.

The scenario played out in the Talents’ parable (Matthew 25:14–30)—of a master leaving his property in control of his slaves—was not uncommon. In the ancient world, greedy people who did not want to get accused of profiting at someone else’s expense, which was considered shameful, would delegate their business to slaves, who were held to a different standard. Rohrbaugh explains the ancients’ reasoning: “Shameful, even greedy, behavior could be condoned in slaves because slaves had no honor nor any expectation of it.”

Accordingly, in the Talents’ parable, the master leaves his money with his slaves in the hope that they will exploit the system and increase his riches. The first two slaves do just this, but the third “honorably refrains from taking anything that belongs to the share of another.”

This slave also does not invest his money at the bank, through which he would have earned interest. The master further reprimands the slave for not doing this, but Rohrbaugh points out: “[S]eeking interest from another Israelite was forbidden by the Torah (Deuteronomy 23:19–20), and, elsewhere in Luke, Jesus says that we should lend ‘expecting nothing in return’ (Luke 6:35).”

Should then the actions of the third slave be condemned or lauded? According to Rohrbaugh, reading Matthew 25:14–30 with ancient eyes suggests that the third slave is the only one who behaved honorably in the Talents’ parable.

Learn more about the Parable of the Talents’ meaning by reading Richard L. Rohrbaugh’s full Biblical Views column “Reading the Bible Through Ancient Eyes” in the September/October 2016 issue of Biblical Archaeology Review.

This Bible History Daily feature was originally published on September 26, 2016.