Uncovering the Jewish Context of the New Testament 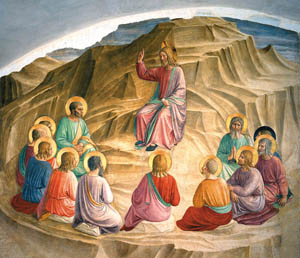 As Jewish New Testament scholar Amy-Jill Levine can attest, the New Testament can often seem strange or even offensive to Jews, but with a better understanding of the texts as Jewish literature about Jesus the Jew, both Jews and Christians can gain an appreciation of its deep Jewish context. In this painting of the Sermon on the Mount by Fra Angelico, Rabbi Jesus teaches his disciples. Photo: Scala/Art Resource, NY.

Most Jewish readers approach the New Testament, if they approach it at all, with at best a certain unfamiliarity. This is unfortunate, according to Jewish New Testament scholar Amy-Jill Levine, for much if not all of the New Testament is Jewish literature. She points out that Jesus the Jew is the first person in recorded history to be called “Rabbi,” and Paul is the only undisputed first-century Pharisee from whom we have written records. Most of the other New Testament writers were also Jewish, writing for a Jewish audience.

Unfortunately, for many who are Jewish, New Testament writings may well leave a first impression of dismay, if not worse. For these readers, a second look is advisable. When the New Testament is understood within its own historical context, not only can Jews recover part of Jewish history, but they can also comprehend the New Testament’s polemics, its assertions of Jesus’ divinity and its claims of fulfilled prophecy.

In the gospel stories about Jesus, the Jews are often identified as the opposition—even the enemy. This conflict is now read as Christians vs. Jews, rather than the internal Jewish dispute it was in the first century. It is a text that has shaped Jewish-Christian relations, often in negative ways. In looking at the New Testament in context, readers can appreciate what Jews and Christians hold in common and how the two groups gradually came to form separate religions.

——————
BAS Library Members: Read more from Jewish New Testament scholar Amy-Jill Levine about the Jewish context of the New Testament in “What Jews (and Christians too) Should Know About the New Testament” in the March/April 2012 issue of Biblical Archaeology Review.

This Bible History Daily feature was originally published in March 2012.

The Archaeological Quest for the Earliest Christians, Part 1 by Douglas Boin