Read Helmut Koester’s article “Recovering the Original Meaning of Matthew’s Parables” as it originally appeared in Bible Review, June 1993. Koester suggests that the parables of Jesus did not communicate a hidden meaning when they were told by Jesus—the parables of Jesus could be understood by all. The article was first republished in Bible History Daily in 2013.—Ed. 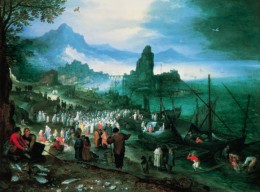 “Christ preaching on the Sea of Galilee,” by Jan Bruegel the Elder (1568–1625). When the audience heard the parables of Jesus, “such a very large crowd gathered” that he preached from a boat while his audience remained on the shore (Matthew 13:1–2//Mark 4:1–2). Bridgeman/Art Resource, NY

Jesus’ parables were among the earliest of his sayings to be collected. One collection of parables formed the basis of the fourth chapter of the Gospel of Mark. The author of the Gospel of Matthew then used this Markan material and added more parables from other sources, thus assembling in a unified speech in chapter 13 seven parables: the parables of the Sower (Matthew 13:1–9), the Tares (13:24–30), the Mustard Seed (13:31–32), the Leaven (13:33), the Hidden Treasure (13:44), the Pearl of Great Price (13:45–46), and the Drag-net (13:47–50). Most of these parables will be read this summer from church lectionaries, which provide biblical passages to be read during Sunday services.

By the time these parables were written down, they had gone through a long period of use by Christian churches, sometimes significantly altering their original meaning. That is most evident in the Parable of the Sower, to which already Mark (4:13–20 = Matthew 13:18–23) had added an allegorical interpretation in which each feature of the parable is given a special meaning. In the Parable of the Sower, the allegorical interpretation understands the different types of earth on which the seed falls as four types of people who receive the word of God: (1) those from whom Satan is able to snatch the word, (2) those who receive it at first joyfully but then lose faith in times of persecution, (3) those in whom the word cannot grow because they are deceived by wealth, and (4) those in whom the word takes root and grows and brings fruit 30-, 60-, 100-fold.

Such an understanding is fundamentally different from the original meaning of Jesus’ words. As Jesus told the parable, it was much shorter, more like the brief version found in the recently discovered non-canonical Gospel of Thomas (#9):

The parables of Jesus are closely tied to their ancient setting. The Galilee is one of the most evocative locales in the New Testament—the area where Jesus was raised and where many of the Apostles came from. Our free eBook, The Galilee Jesus Knew, focuses on several aspects of Galilee: how Jewish the area was in Jesus’ time, the ports and the fishing industry that were so central to the region, and several sites where Jesus likely stayed and preached.

In this form, the parable focuses only on the seed that fell on good soil and brought unbelievably rich fruit, while the seeds that were wasted and produced nothing are mentioned only for the sake of contrast. This is what the kingdom of God is like: Although much of the seed is lost, and although the sower is rather careless throwing so many seeds on the road, on rock and under the thorns, the results are nevertheless rich beyond belief. Thus Jesus originally illustrated God’s power to do miracles. The point of this parable was therefore analogous to the parables of the Mustard Seed and the Leaven.

The Parable of the Tares (Matthew 13:24–30) also received a secondary allegorical interpretation in Matthew’s Gospel (Matthew 13:36–43): the “sower of the good seed” is the Son of Man, the “field” is the world, “the good seeds” are the sons of the kingdom, “the bad seeds” are the sons of the evil one, the “enemy” is the devil and the final burning after the harvest is the last judgment. However, the parable originally did not speak of wheat and weeds and burning with hidden meanings. Rather, it told a simple story about a farmer who had sown good-quality seed in his field and had the patience to wait, as a wise farmer would, in spite of all the weeds growing up together with the wheat. Jesus thus admonished his hearers to be patient and trusting and not to be alarmed if they see so much evil in the world.

Matthew’s tendency to understand parables as allegories with hidden meanings is finally all too evident in his interpretation of the Parable of the Drag-Net. In its original form the parable spoke about the wisdom of selecting that which is good. As the parable is told in the Gospel of Thomas (#8), it is still clear that it wants to illustrate wisdom:

Matthew 13:49–50 on the other hand, changed the conclusion so that it pointed to the Final Judgment: “So it will be at the close of the age. The angels will come out and separate the evil from the righteous, and throw them into the furnace of fire.”

As the parables were told originally by Jesus, they were addressed to all people and could be understood by all. They did not communicate a hidden meaning that only the initiated insider could discover through complicated allegorical interpretation. Scholars have come to recognize that the allegorical meanings were added to the parables at a later stage of transmission. By the time the parables appear in the canonical Gospels, they were thought to be understandable only to those who have received “the mystery [or mysteries] of the kingdom,” and that they conceal their true message so outsiders would not be able to comprehend them (Matthew 13:10–15 = Mark 4:10–12). The church, characterizing the parables as secret teaching, claimed them as a peculiar Christian doctrine and used them to explain experiences in the life of Christian communities. Christians wanted to know why so many people were losing their faith during persecution (“the word had not taken root in their soul,” Matthew 13:21), why others could not develop their faith to bear fruit (“wealth had deceived them,” Matthew 13:22) and whether evil-doers would eventually be punished (“at the end of the age, they will be thrown into the eternal fire,” Matthew 13:42, 50). However, the original parables are still preserved and their message can still be heard: They speak of patience, wisdom and trust in God’s power.

Helmut Koester was the John H. Morison Research Professor of Divinity and Winn Research Professor of Ecclesiastical History at Harvard Divinity School, where he had taught since 1958. His research was primarily in the areas of New Testament interpretation, history of early Christianity, and archaeology of the early Christian period. He passed away on January 1, 2016.